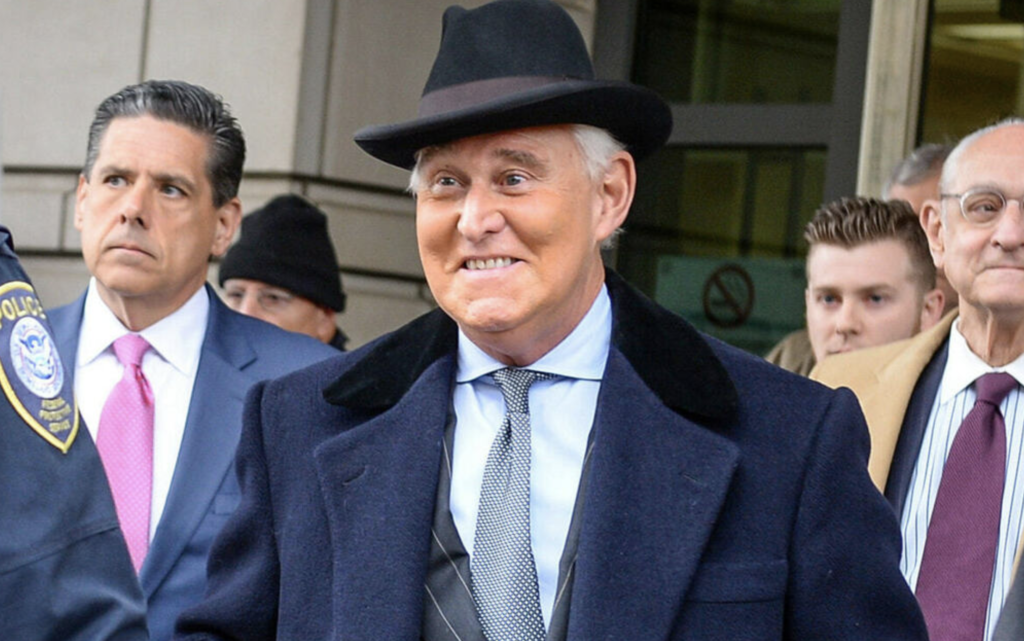 No Jail Time When You’re Friends With Trump

The move – sparing Stone from jail but not a pardon – came just after a court denied Stone’s request to delay the start date of his 40-month prison term.

He was convicted of lying to Congress, obstruction and witness tampering.

Stone was the sixth Trump aide found guilty on charges linked to a justice department probe that alleged Russia tried to boost the Trump 2016 campaign.

The 67-year-old had been due to report to a federal prison in Jesup, Georgia, next Tuesday.

In a tweet on Saturday, Mr Trump said: “Roger Stone was targeted by an illegal Witch Hunt that never should have taken place.”

Earlier, the White House said in a statement that Stone was “a victim of the Russia Hoax that the Left and its allies in the media perpetuated for years in an attempt to undermine the Trump Presidency”.

It said that Department of Justice prosecutors under special counsel Robert Mueller only charged Stone out of frustration after failing to prove the “fantasy” that the Trump campaign had colluded with the Kremlin.

“This is why the out-of-control Mueller prosecutors, desperate for splashy headlines to compensate for a failed investigation, set their sights on Mr Stone,” said the statement.

The White House also suggested that the FBI had tipped off CNN about their pre-dawn raid on Stone’s house, noting that a camera crew for the cable network was on the scene to record the arrest.

“Roger Stone has already suffered greatly,” the statement said. “He was treated very unfairly, as were many others in this case.  Roger Stone is now a free man!”

Mr Trump had been hinting about a reprieve for Stone for months, including on Thursday night in an interview with a Fox News host.

It’s hard to say the president’s decision to grant clemency to his long-time friend and political counsellor is surprising, but it’s still jarring. Even though the president has called the special counsel investigation that prosecuted Stone a sham and a partisan witch hunt, Stone was duly convicted of serious crimes.

Meanwhile, Stone’s active lobbying for a commutation, recently saying that he could have “easily” turned on the president to avoid trial, was unseemly at best.

Mr Trump is not the first president to issue controversial pardons or commutations for friends and associates, of course. Most of his predecessors, however, waited until the last days of their presidency to take such actions, as they knew the political firestorms they would generate.

Mr Trump, on the other hand, seems to relish the controversy. Like much of his time in office, his actions are done with an eye toward a base that views instigating political opponents as an end to itself.

While the action will be sharply criticised, at this point in the Trump presidency his critics and his allies appear pretty much set in stone. Giving Stone a reprieve won’t win Mr Trump any new support, but that’s not the point. He’s helping a loyal friend, critics be damned.

Stone told the Associated Press news agency that Mr Trump had called him earlier on Friday to let him about the commutation.

The political adviser said he was celebrating in Fort Lauderdale, Florida, with his friends and drinking champagne.

“With this commutation,” said the top Democratic lawmaker, “Trump makes clear that there are two systems of justice in America: one for his criminal friends, and one for everyone else.”

Democratic Senator Elizabeth Warren said it showed Donald Trump was the most corrupt president in history.

The president has been accused by political critics of undermining the justice system by criticising criminal cases against Stone and other former aides.

The president’s commutation does not void a criminal conviction as a pardon does.

Stone was found guilty of lying to the House Intelligence Committee about his attempts to contact Wikileaks, the website that released damaging emails about Mr Trump’s 2016 Democratic election rival Hillary Clinton.

US intelligence officials have concluded the messages were stolen by Russian hackers.

Stone had acknowledged during the 2016 campaign that he was in contact with Wikileaks founder Julian Assange.

He also intimated that he knew the website would disclose more than 19,000 emails hacked from the Democratic National Committee servers.

In a remarkable move, US Attorney General William Barr had overruled that sentencing guideline following a Trump tweet, and instead recommended a more lenient punishment.

That intervention led to the entire Stone prosecution team resigning from the case.