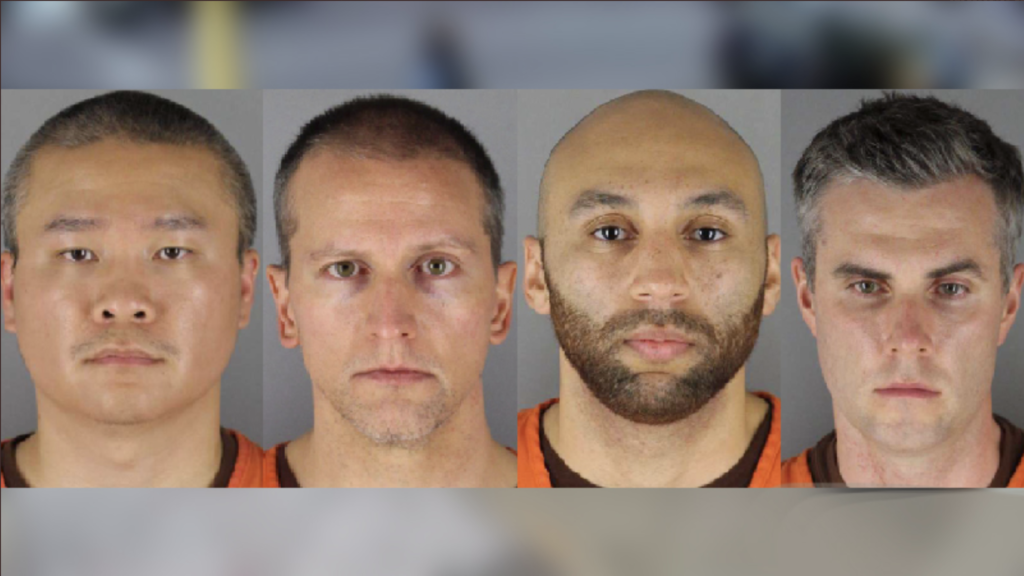 Now These Are The Correct Uniforms

According to court records, Tou Thao, Thomas Lane and J Alexander Kueng all face aiding and abetting second-degree unintentional murder, as well as aiding and abetting second-degree manslaughter. WCCO has been informed that at least one of the former officers, Lane, turned himself in. All three men are scheduled to make their first court appearances Thursday at 12:45 p.m.

In a widely-seen video shot on May 25, Chauvin is seen kneeling on George Floyd’s neck for nearly eight minutes. Lane and Kueng helped hold Floyd down while Thao stood watch.

In regards to Chauvin’s upgraded charge, Minnesota’s sentencing guidelines indicate two different possibilities for intentional second-degree murder and unintentional second-degree murder. The former sentencing guideline calls for, upon conviction, 25 and a half years in prison, whereas the latter calls for 12 and a half years.

Attorney Eric Nelson of Halberg Criminal Defense will be representing Chauvin. None of the officers’ attorneys commented on the charges Wednesday.

“I believe the evidence available to us now supports the stronger charge of second-degree murder,” Ellison said.

On the other officers being charged, Ellison said, “I strongly believe that these developments are in the interest of justice for Mr. Floyd, his family, our community and our state.”

Ellison stressed this will take time. He asked for patience from the community, saying they won’t be able to say much publicly as they build a case. They’ll do their talking in court.

Ellison said while confident, this case won’t be an easy road, and winning a conviction will be hard. He also noted that Freeman is the only prosecutor in Minnesota who has successfully convicted a police officer for murder.

“History does show there are clear challenges here. We are working hard to rely on each other and our investigating partners and community to support that endeavor,” Ellison said.

Gov. Tim Walz weighed in on the investigation during a press conference early Wednesday evening.

“This is the step today the public wants to see. Our justice system makes to make sure justice is served,” Walz said.

Earlier, Walz released a statement following Ellison’s announcement and a picture of him at the George Floyd memorial:

I laid flowers at George Floyd’s memorial this morning. As a former high school history teacher, I looked up at the mural of George’s face painted above and I reflected on what his death will mean for future generations. What will our young people learn about this moment? Will his death be just another blip in a textbook? Or will it go down in history as when our country turned toward justice and change?

It’s on each of us to determine that answer.

The charges announced by Attorney General Keith Ellison today are a meaningful step toward justice for George Floyd. But we must also recognize that the anguish driving protests around the world is about more than one tragic incident.

George Floyd’s death is the symptom of a disease. We will not wake up one day and have the disease of systemic racism cured for us. This is on each of us to solve together, and we have hard work ahead.

Minneapolis Mayor Jacob Frey praised the new round of charges.

“That George Floyd’s plea – that his struggle to survive – went unrecognized and unaided by not just one but four officers will live forever as the most chilling moments in our city’s history. Failing to act amounted to a failure to recognize George’s humanity. As Chief Arradondo has stated, silence is complicity, and complicity cannot be tolerated,” Frey said.

On Monday, Ben Crump, the attorney representing George Floyd’s family, released the findings of an independent autopsy and said they determined that Floyd died of asphyxiation from sustained pressure. However, the Hennepin County Medical Examiner’s final autopsy report said that the cause of death was homicide, due to cardiopulmonary arrest complicating law enforcement subdual, restraint and neck compression.

Ellison took the lead on the case last week, and will work alongside Hennepin County Attorney Mike Freeman. There were calls in the community for Ellison to prosecute Floyd’s death. Gov. Walz said the move was made as heard a profound message from protesters: “They believe time and time again, the system works perfectly well as it was designed: to deny those rights and deny justice to communities of color.”

On Tuesday, the Minnesota Department of Human Rights announced it will begin an investigation into the Minneapolis Police Department after filing a civil rights charge related to Floyd’s death. Gov. Tim Walz said that this investigation into policies, procedures, and practices over the last 10 years will determine if the MPD has “engaged in systemic discriminatory practices towards people of color and ensure any such practices are stopped.”

Floyd’s death has tipped off an extensive and nationwide series of protests, riots and soul-searching about the country’s policing standards and the persistence of systemic racism. Cities from New York and Los Angeles to Baltimore, Dallas and Washington D.C. have all seen peaceful protests as well as violence, looting and destruction.

In Minneapolis and St. Paul, hundreds of buildings have been either destroyed or damaged by fires, looted, or sustained property damage or been tagged with graffiti. The heart of Lake Street, stretching in both directions from its intersection with Minnehaha Avenue — the location of the MPD’s now-burned 3rd Precinct — for a total of six miles, has particularly been decimated. There have been extensive damages done in Minneapolis’s north side, as well as St. Paul’s Midway neighborhood along University Avenue.

Officers were dispatched to Cup Foods on the report of a man buying merchandise with a counterfeit $20 bill. Shortly after 8 p.m., Officers Thomas Lane and J Alexander Kueng arrived with their body cameras activate and recording. The officers learned from store workers that the man, later identified as Floyd, was parked in a car around the corner.

Body camera footage shows the officers approaching the car with Lane on the driver’s side and Kueng on the passenger side. Three people were in the car: Floyd, another man and another woman.

As Lane began speaking with Floyd, he pulled out his gun, pointed it at Floyd and ordered him to show his hands. Floyd then put his hands on the steering wheel and Lane holstered his firearm. Lane then ordered Floyd out of the car and handcuffed him, but Floyd “actively resisted being handcuffed,” the complaint states. Once handcuffed, however, police said Floyd did not resist and walked with Lane to the sidewalk. Floyd then sat on the ground at Lane’s direction. The complaint says Lane spoke with Floyd for under two minutes, asking Floyd for his identification and name. He also asked Floyd if he was “on anything” and told Floyd he was going to be arrested for passing counterfeit currency. Then, Lane and Keung stood Floyd up and attempted to take him to their squad car. Floyd then “stiffened up, fell to the ground and told the officers he was claustrophobic,” the complaint states.

That’s when Officers Chauvin and Tou Thao arrived on the scene in a separate squad car. After making several attempts to get Floyd in the backseat from the driver’s side, the complaint says Floyd wouldn’t get in and would struggle with the officers by intentionally falling down. The complaint says that Floyd began saying and repeating he could not breathe while standing outside the car. Chauvin then went to the passenger side and tried to get Floyd in from that side, with Lane and Keung assisting.

Chauvin then pulled Floyd out of the passenger side of the car at 8:19 p.m. and Floyd went to the ground face down while still handcuffed.

While Keung and Lane held Floyd’s back and legs, Chauvin “placed his left knee in the area of Mr. Floyd’s head and neck.” Floyd could be heard repeatedly saying “I can’t breathe”, as well as “mama” and “please.” The officers, however, stayed in their positions. The officers told Floyd, “You are talking fine”, as he continued to struggle. At one point, Lane asked “should we roll him on his side?” To which Chauvin responded, “No, staying put where we got him,” the complaint states.

Lane then said he was “worried about excited delirium or whatever” to which Chauvin responded, “That’s why we have him on his stomach.” They continued holding their positions.

At 8:24 p.m., Floyd stopped moving. Kueng then checked Floyd’s right wrist for a pulse and said “I couldn’t find one.” The officers continued to hold their positions. At 8:27 p.m., Chauvin removed his knee from Floyd’s neck as medics arrived. Floyd was taken away in the ambulance. He was pronounced dead at Hennepin Healthcare.

The complaint determined that Chauvin had his knee on Floyd’s neck for 8 minutes and 46 seconds total. Two minutes and 53 seconds of that time was after Floyd became unresponsive.

“Police are trained that this type of restraint with a subject in prone position is inherently dangerous,” the complaint said.