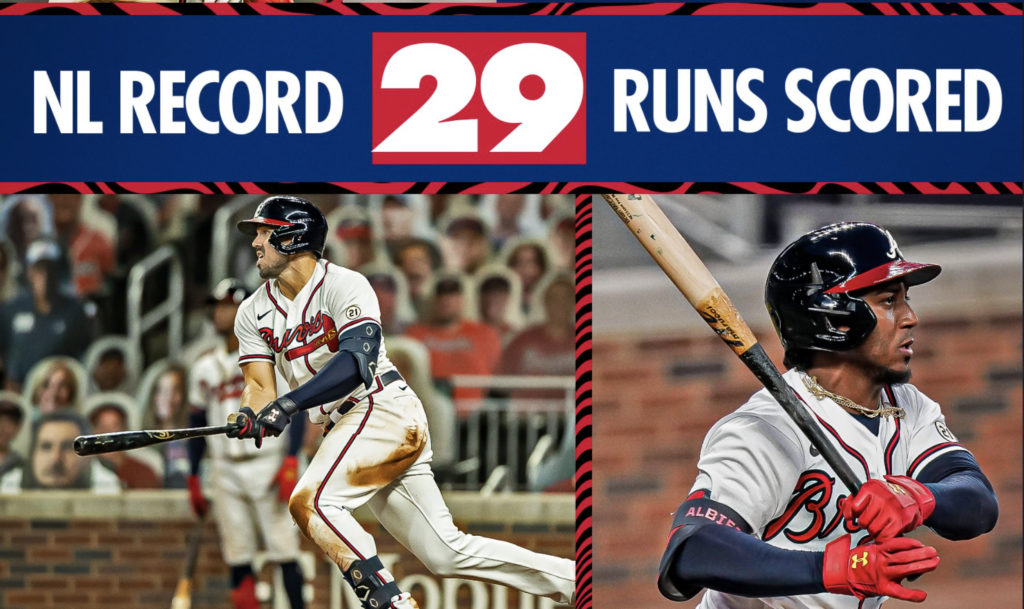 Now THIS is a Baseball Game!

The Atlanta Braves scored 29 runs against the Miami Marlins on Wednesday night, falling one short of tying the major league record for most runs in a game.

“Pretty amazing,” said Freddie Freeman, who drove in six runs with three hits, including a two-run homer. “Hard to put into words, really, when you look up and see 29 runs on the board.”

A day after being shut out by the Marlins on four hits, the Braves broke loose. They had 23 hits, including seven homers, to score the most runs in Braves franchise history (Boston, Milwaukee and Atlanta) since 1900. They topped the old record by six runs.

Atlanta trailed Miami 2-0 heading into the bottom half of the second inning, when the Braves sent 14 batters to the plate and exploded for 11 runs.

Duvall hit one of the team’s three homers in the second, knocking Pablo Lopez out of the game. Duvall hit another homer, his 12th, in a six-run fifth and added the slam in the seventh off Josh Smith.

He finished 3-for-4 with three homers and a franchise-record-tying nine RBIs. He also became the first player in Braves history with multiple three-homer games in a season; his previous one came last week in Boston.

“I’ve known that homers come in bunches, but something like that is pretty special,” Duvall said. “I’m going to enjoy this one tonight.”

Ozzie Albies, playing in his first game since Aug. 4 in his return from a wrist injury, had three hits, including a homer. Travis d’Arnaud and Ronald Acuna Jr. hit three-run homers.

Freeman’s homer in the third was his 1,500th career hit. Dansby Swanson, who had three hits, Austin Riley and Duvall each scored five runs.

Freeman said he woke up to a text from manager Brian Snitker saying he would be hitting second Wednesday night. D’Arnaud served as the Braves’ new cleanup hitter.

“I would assume so,” Freeman said. “I think it would be very hard for him to change the lineup after scoring 29 runs.”

The Braves scored 18 of their 29 runs by home runs, tying the MLB record for most runs scored via homers in a game, according to ESPN Stats & Information.

“He just seemed to be out of sync early in that game with the walks and wasn’t getting anything really over,” Marlins manager Don Mattingly said.

The biggest victim on the Marlins’ pitching staff was reliever Jordan Yamamoto, who gave up 12 earned runs in 2⅔ innings. Yamamoto is just the second reliever over the past 70 years to allow 12 earned runs in an outing, joining Vin Mazzaro, who allowed 14 in a 2011 game.

The 20-run loss is the Marlins’ largest margin of defeat in franchise history, according to ESPN Stats & Info.