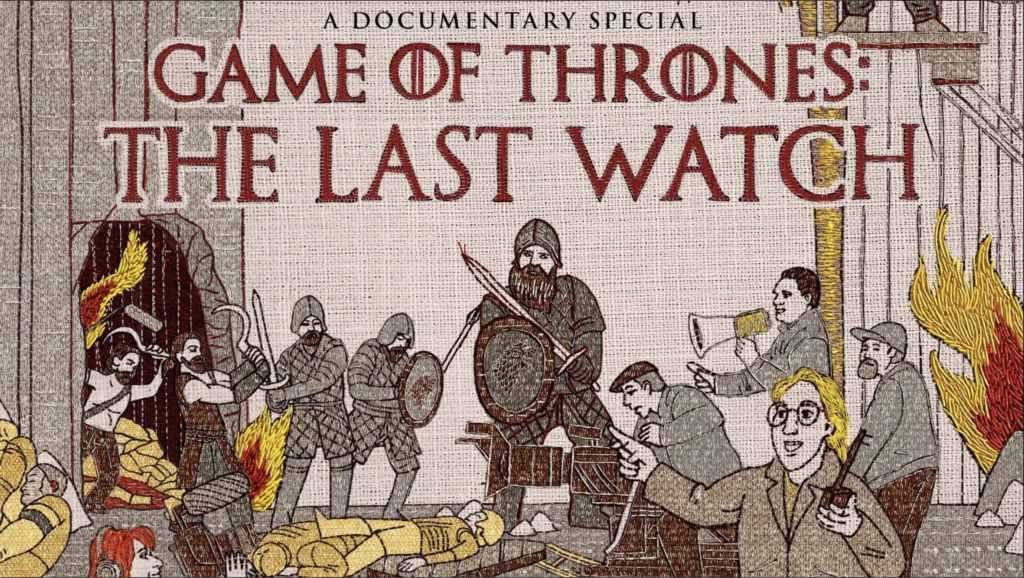 One Last Gift For Game Of Thrones Fans

HBO gave fans a long parting look at the making of “Game of Thrones” on Sunday night in a two-hour documentary that focused on the Herculean efforts by the small army craft and technical experts who worked on the mammoth fantasy drama.

“Game of Thrones: The Last Watch” introduced viewers to the leaders of the below the line departments that breathed life into the “Thrones” milieu with costumes, hair, makeup, special effects, location managers, a fleet of extras and an entire department devoted to snow.

“Last Watch” gave a generous spotlight to Bernie Caulfield, the veteran producer who has been hailed by “Thrones” showrunners/exec producers David Benioff and D.B. Weiss as the linchpin of the execution of the most expensive and ambitious series ever produced for television. British documentarian Jeanie Finlay was embedded with the show for a year during its location shoots in Northern Ireland, Croatia and elsewhere for its final season, which concluded May 19 with record ratings for HBO.

In discussing the enormity of the production, Caulfield likens the job of organizing season eight to figuring out an algebraic equation. “We keep messing with the puzzle. When that last piece fits, you’re like ‘Yeah, it worked.’ “

Here are six more things we learned from “The Last Watch”:

Production designer Deborah Riley illustrates all that was at stake in season eight, where the budget reached some $15 million or more per hour. “All we were doing in seasons 4, 5, 6 and 7 were training for season eight,” Riley explained.

David Nutter, who directed three of season eight’s six episodes, emphasized the importance of so many departments coordinating details down to the last second, in many cases. “I’m a conductor of fine musicians who basically waves his arms around,” he says.

The doc does a good job of demonstrating the sacrifices that the “Thrones” production crew members made in trekking around Europe to lense the show. Prosthetic makeup experts Sarah and Barrie Gower worked together on the show, which meant leaving their young daughter behind. Sarah Gower is seen tearfully talking to her daughter via Internet video.

The series production offices did in fact have entire shelves devoted to “shoulders” and other severed body parts.

Among the thousands of small details that had to be minded, one production staffer was assigned to keep an eye on the state of Daenerys’ blond locks. Clarke was also protective of Dany’s mane. “That is still the most beautiful hair I will ever have on my head,” Clarke says, looking at her braided wig while sitting in a makeup chair.