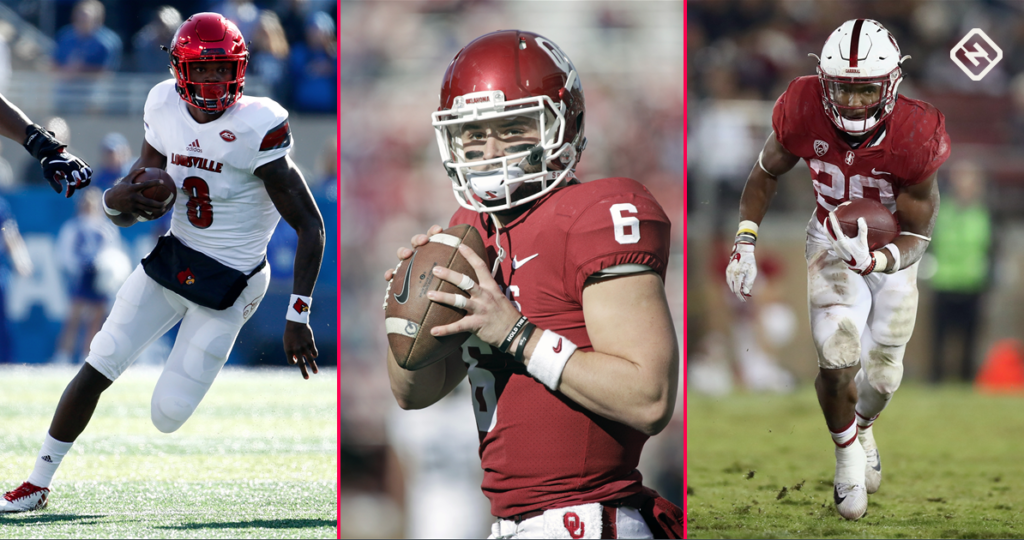 One Of These Men Will Win The Heisman

Along with Mayfield, reigning Heisman winner Lamar Jackson and Stanford running back Bryce Love were selected as finalists. The winner of the award, which goes to college football’s most outstanding player, will be revealed Saturday at the Downtown Athletic Club in New York.

Excluding Jackson since he’s still in college, eight of the past nine Heisman winners have been selected in the first round of the NFL draft.

Mayfield’s a Heisman finalist for the second year in a row after leading the Sooners to a Big 12 title and berth in the College Football Playoff (Rose Bowl vs. Georgia). He leads the FBS this season with 46 total TDs, and is the FBS all-time leader in passer efficiency rating (176.03). The QB was stripped of his captaincy a couple weeks ago after making a lewd gesture during Oklahoma’s win over Kansas. He was arrested in the offseason on charges of public intoxication, fleeing, disorderly conduct and resisting arrest. He eventually accepted a plea deal in the case.

The QB can solidify himself as a likely first-round pick with a strong showing in the postseason, although NFL teams will certainly investigate the off-field concerns leading up to the 2018 draft.

Jackson is seeking to become the second two-time Heisman winner and first since Griffin accomplished the feat in 1974-1975. The dual-threat QB put up ridiculous numbers last season, and he’s done so again this year, throwing for 3,489 yards and 25 TDs and rushing for 1,443 yards and 17 TDs. Most importantly, he improved his completion percentage by four points (60.4 percent in 2017). He leads the FBS with an average of 411 yards per game. His candidacy, however, will likely be hurt by Louisville’s losses. The Cardinals aren’t ranked after going 8-4, and Jackson had his worst games against UL’s toughest opponents.

Love is having a breakout season for the Cardinal, emerging as a star after playing in the shadow of 2017 first-round pick Christian McCaffrey. Love rushed for 1,973 yards this season (second in the FBS) and averages 8.3 yards carry.