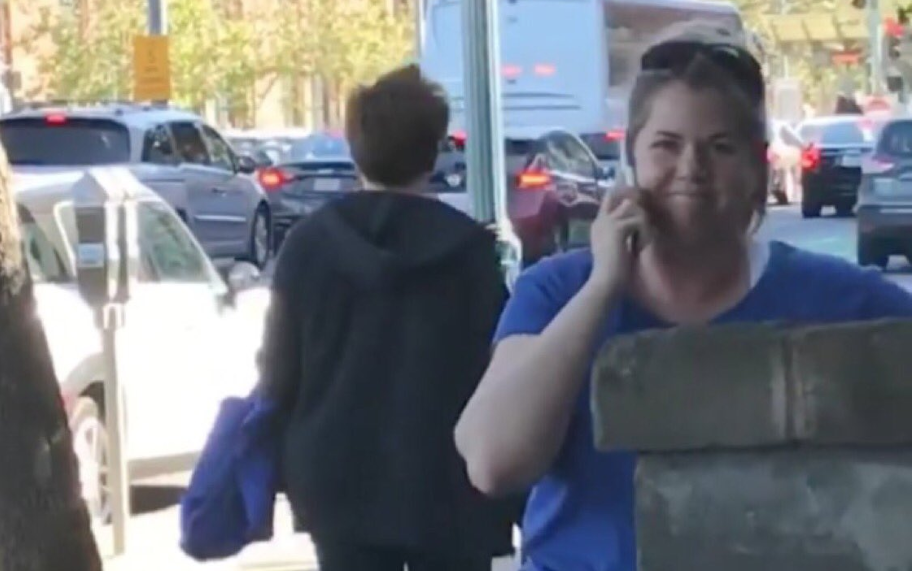 #PermitPatty is Blowing Up the Net For All The Wrong Reasons

In a video posted to Instagram on Saturday, a white woman in San Francisco was captured apparently calling the police on a nonwhite girl who’s 8 years old. The child’s supposed crime? Selling water “illegally.”

But the woman, Alison Ettel, who spoke to HuffPost later in the day, said that “this has no racial component to it” and claims she only “pretended” to call the police.

“This woman don’t want a little girl to sell some water, she’s calling the police on an 8-year-old girl,” the child’s mother, who took the video, is heard saying.

Ettel is seen on the phone, then ducks down out of sight after seeing she is being recorded. Ettel later told HuffPost she ducked to “find a quiet place where I could hear” the building security guard she said she was speaking to.

“Yeah, and um, illegally selling water without a permit?” Ettel says into the phone.

“On my property,” the mother responds.

“It’s not your property,” Ettel says.

The woman who shot the video, whose Instagram handle is ladyesowavy, did not respond to a message seeking comment,

Ettel told HuffPost that the incident, which has left her feeling “horrible and heart-wrenched,” began because the girl’s mother was “screaming.” She asked the building’s security to intervene, but said they could do nothing.

“They were screaming about what they were selling,” she said. “It was literally nonstop. It was every two seconds, ‘Come and buy my water.’ It was continuous and it wasn’t a soft voice, it was screaming.”

Ettel said she had the windows of her office open. When asked why she did not close the windows, she said because it was too hot and closing them would not have stopped the noise.

After confronting the girl and her mother, Ettel said she was only bluffing when she said she was going to call the cops. The San Francisco Police Department did not respond to a message from HuffPost.

“I had been putting up with this for hours, and I just snapped,” Ettel said.

She vehemently denies the issue had to do with race.

“I have no problem with enterprising young women. I want to support that little girl. It was all the mother and just about being quiet,” she said.

The incident bears a striking similarity to one in April in which a white woman in Oakland called the police on a black family for attempting to set up a grill in a park. As the video went viral, the woman was given the nickname “BBQ Becky.”

In this most recent case, Twitter users have taken to calling the new party crasher “Permit Patty.”

Ettel said she is now getting threats online and feels “discriminated against.”

“It was stupid,” she said. “I completely regret that I handled that so poorly. It was completely stress-related, and I should have never confronted her. That was a mistake, a complete mistake. Please don’t make me sound horrible.”