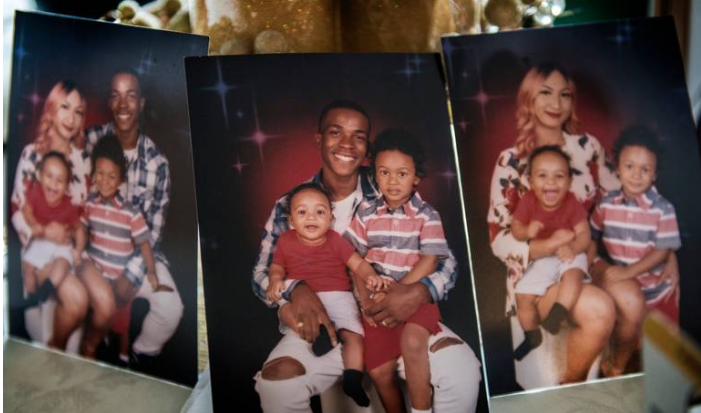 Sacramento police fatally shot Stephon Clark on Sunday night within seconds of encountering him next to his grandparents’ home in south Sacramento, video released Wednesday by the department shows.

About six minutes after the shooting, after backup arrives, an officer can be heard telling another officer, “hey mute.”

Sound then cuts out as officers apparently turn off their microphones. But video continues and the officers can be seen speaking to each other and to at least one civilian on scene for about two more minutes before the video ends.

“We asked, ‘Can they do that,’” said Les Simmons, a pastor and social activist in Sacramento who viewed the footage with two of Clark’s family members Wednesday afternoon prior to its public release. “They all just muted their mics. … It was a moment of, what are they doing? What are they saying?”

Sacramento police spokesman Sgt. Vance Chandler said, “There are a variety of reasons why officers have the opportunity to mute their body worn cameras.”

Chandler referred a Sacramento Bee reporter to the department’s general orders for details.

Simmons and Clark’s aunt, Saquoia Durham, said after viewing the videos that they believe the fatality could have been avoided.

“As soon as they did the command, they started shooting. They said ‘put your hands up, gun’ and then they just let loose on my nephew,” said Durham.

“They didn’t give him a chance to put his hands up or anything, and then when they shot him down, they knew they messed up,” she said.

The release by the Sacramento police Wednesday included two audio and three video recordings of the fatal shooting of Clark by two officers in Meadowview, a working class neighborhood that has historically had uneasy relations with law enforcement.

Clark was unarmed and holding only a cellphone.

The videos include body camera footage from the two officers involved in the shooting, each of whom fired 10 shots at Clark, according to the department. The officers have not yet been identified, but Chandler said the names would be released within 10 days. The department also said more video from other responding officers would also be released soon.

Included in the videos was aerial footage captured by a Sacramento County Sheriff’s Department helicopter. It’s the first time Sheriff Scott Jones has released video in an officer-involved shooting.

In a frenetic sequence that lasts about 10 seconds, police chase Clark into the backyard of his grandparents’ home, where he had been staying on and off for a month, yelling at him to “show me your hands. Stop. Stop.”

Clark rounds the corner into the dark area and runs toward a covered patio at the far side. He can‘t be seen for a moment from overhead while the helicopter circles to a different position, and the body camera footage is dark.

One officer yells, “Show me your hands. Gun,” and quickly ducks back behind the wall for cover. In the bodycam footage, it appears the second officer may be pulling his partner to cover.

Then Clark can be seen taking a few steps toward officers as one officer moves into the backyard again.

The officer yells, “Show me your hands. Gun, gun, gun,” before both officers fire a rapid barrage of shots.

Both officers are illuminating the scene with what appears to be flashlights attached to their weapons. Neither identifies themselves as a police officer.

The overhead video shows one of the first shots hit Clark, sending him crawling on his hands and knees away from the backdoor of the house, before more than 15 additional bullets go flying from their chambers.

Police training expert Ed Obayashi said after viewing some of the video that the shooting was “reasonable” and that firing so many shots was standard procedure.

“It looks bad, but (the officers) are still perceiving a threat,” said Obayashi. “He’s not obeying. He’s running from them. He suddenly turns. The problem is he‘s got an object in his hand which unfortunately even during daylight could easily be considered a gun.”

Simmons said he believed it was “a lack of proper training to handle a situation like this.”

“Even if he did what they say was done, at the end of the day it does not justify his life being taken,” said Simmons.

Sacramento Mayor Darrell Steinberg said he had reviewed the videos as well.

“Based on the videos alone, I cannot second guess the split-second decisions of our officers and I’m not going to do that,” Steinberg said in an emailed statement. “The investigation must be completed. We need more information in addition to the video before we can render any final conclusions. The questions raised by the community and councilmembers are appropriate and must be answered during the investigation. For instance, what are the protocols regarding use of force and for rendering emergency aid during officer involved shootings?”

After Clark is shot and lying face down on the ground, one officer tells the other to do a “tactical reload” in case more force is needed. Both officers assure one another that they have not been hit.

The officers then wait for about six minutes for backup – guns drawn – before Clark is approached for aid. In the interim, another officer can be heard saying “go get a non-lethal” weapon, and “hit him” with it, apparently to ensure Clark was not an armed threat before approaching.

“He came up and he, he kind of approached us, hands out, and then fell down,” one of the involved officers says as more officers arrive.

Once officers do approach Clark, he can be seen lying on the concrete with a white iPhone nearby. Officers handcuff him and begin CPR, sending an officer to get a safety mask before beginning.

Soon after, an officer arriving on the scene tells one of the officers who fired shots to turn off his microphone, and the audio ends.

The videos were released Wednesday afternoon after police met with Clark‘s family members to allow them to view the materials first. Simmons was also present.

Allowing family to see such videos before they are released to the public is part of a city policy adopted in late 2016 by the city of Sacramento after the fatal shooting by police of Joseph Mann, a mentally ill black man. Mann’s shooting led to major reforms in the department, including a requirement that all patrol officers wear body cameras.

The reforms also require police to release videos in “critical incidents” such as officer-involved shootings and deaths in custody within 30 days of the event. Sacramento police Chief Daniel Hahn, the city’s first African American chief, has been releasing videos more quickly than the requirement and for a broader range of events than covered by the new law since taking over the department last summer.

The sequence of events leading to Clark’s death began on the night of March 18 when police received a call about a man breaking car windows and hiding in a backyard in the 7500 block of 29th Street.

Police dispatched ground units, and the Sacramento County Sheriff’s Department responded with a helicopter. Deputies in the helicopter reported seeing a man in a backyard pick up an object described as a “tool bar” and break a window. The helicopter video does not include this. Chandler said the unit did not begin filming until after this occurred.

Police later said the man in the backyard broke the rear sliding glass door of the home, then discarded the “tool bar.”

Chandler said investigators retrieved a cinder block and a piece of aluminum similar to the kind that would be used for a rain gutter near the broken sliding glass door. Both items were taken into evidence though Chandler said it was uncertain if either was the “tool bar” seen by airborne officers.

Chandler said the man then ran south and jumped a fence into the adjoining property. That property is where Clark’s grandparents live. It’s just prior to this that the helicopter video begins.

The object ultimately determined to be what police saw in Clark’s hand was a cellphone his girlfriend and mother of his two children, Salena Manni, had loaned him. It was in a rose gold-colored case with a black clip on the back for holding items like credit cards, she said.

The shooting has become a focal point for community activists who have continued to campaign for more reforms after the Mann shooting. It has also garnered national attention and likely will draw more. The Rev. Al Sharpton said Wednesday he has been in touch with Clark’s family and plans on traveling to Sacramento to “fight for justice and to ensure (Clark) has a proper burial,” according to a statement to The Bee.

“This is an unfortunate moment,” said community activist Berry Accius. “This moment is probably going to set us back. … We got transparency. Now we need accountability. We can’t get that young man back.”