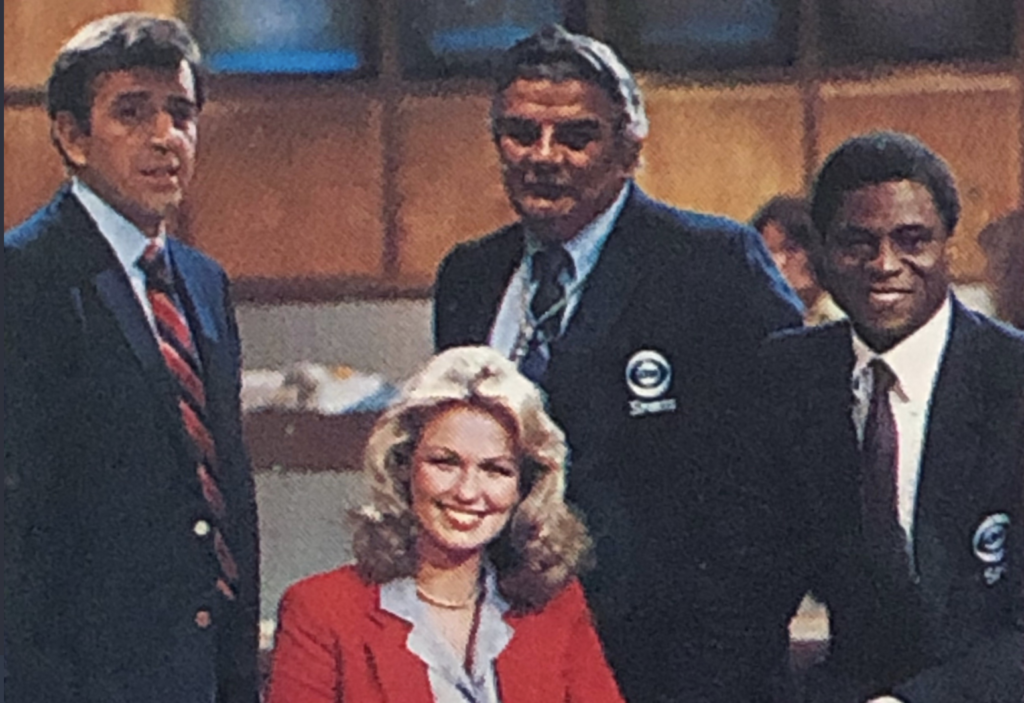 Rest Well To A Sports Pioneer

Phyllis George, a former Miss America winner who became a pioneer in sports journalism and football broadcasting when in 1975 she was named a co-host for “The NFL Today,” has died at the age of 70.

“Phyllis was a great asset to Kentucky,” Brown told the Courier-Journal. “We had a great partnership. I think we enjoyed every single day.”

After winning the Miss America pageant in 1971, George returned to the nation’s living rooms as the first female sportscaster to work at a major TV network when she was hired at CBS in 1974.

Each Sunday afternoon, “The NFL Today” aired three live versions of the half-hour pregame show — one at 12:30 p.m. for the east, another at 1:30 for Midwest stations and again at 3:30 for the West Coast — in addition to brief halftime breaks during the long afternoon. Until then, pregame shows had little cache; it was the postgame program with highlights from the Sunday games that held sway.

“The CBS Sports family is deeply saddened by the passing of Phyllis George, an icon in the sports broadcasting industry who contributed greatly to the rich history and tradition of CBS Sports,” Sean McManus, chairman of CBS Sports, said in a statement. “Phyllis was not only a key member of a show that remains the gold standard of NFL pregame shows, the NFL Today with Brent, Irv and ‘The Greek,’ but also a pioneer for all women in broadcasting.”

When she joined the cast of  ”The NFL Today,” she became one of the first females to have a nationally prominent role in television sports coverage.

“In my gut, I thought Phyllis was pretty special,” the late Bob Wussler, who hired George at CBS, once told USA Today. “I thought there was a role for her, as somebody who could talk to guys who knew something about sports.”

But George said she was bombarded with hate mail.

“When you’re the first, you’re a pioneer,” George told USA Today in a 1999 interview. “I felt they didn’t know who Phyllis George was. They played me up as a former Miss America, a sex symbol. I can’t help how I look, but below the surface, I was a hard-working woman. If I hadn’t made that work, women eventually would have come into sportscasting, but it would have taken them longer.”

Musburger tweeted Saturday night that George didn’t get enough credit for the role she played in opening doors for other female broadcasters.

During her stint at “The NFL Today” from 1975 to 1984 and as co-host of “CBS Morning News” for eight months in 1985, George was also regularly taken to task by critics who charged that she didn’t know sports and she didn’t know news.

“[Being Miss America] has been a help and a hindrance,” George once told the Los Angeles Times. “It’s been a help in that it’s opened doors. It’s been a hindrance in that people immediately said ‘BQ’ — you know, beauty queen. And you had to prove yourself more than the next person.”

George cited Emmys garnered by “The NFL Today” as evidence that she mastered the sports interview.

“I kept showing up and they kept saying, ‘Hey, maybe she’s here to stay,'” George said. “Then we won a couple of Emmys for the ‘NFL Today’ show.”

ESPN’s Beth Mowins, who in 2017 became the first woman to call a regular-season NFL game since Gayle Sierens called one in 1987, said seeing George on “The NFL Today” provided Mowins’ “aha” moment.

“There was a woman talking about football,” Mowins told TheFootballGirl.com. “That’s what I was drawn to. I like sports and like to talk, so the two blended together perfectly.”

In addition to “The NFL Today,” George worked regularly on horse racing events, including the Preakness Stakes and the Belmont Stakes.

George married Brown, a millionaire, in 1979. They divorced in 1998 and have two children.