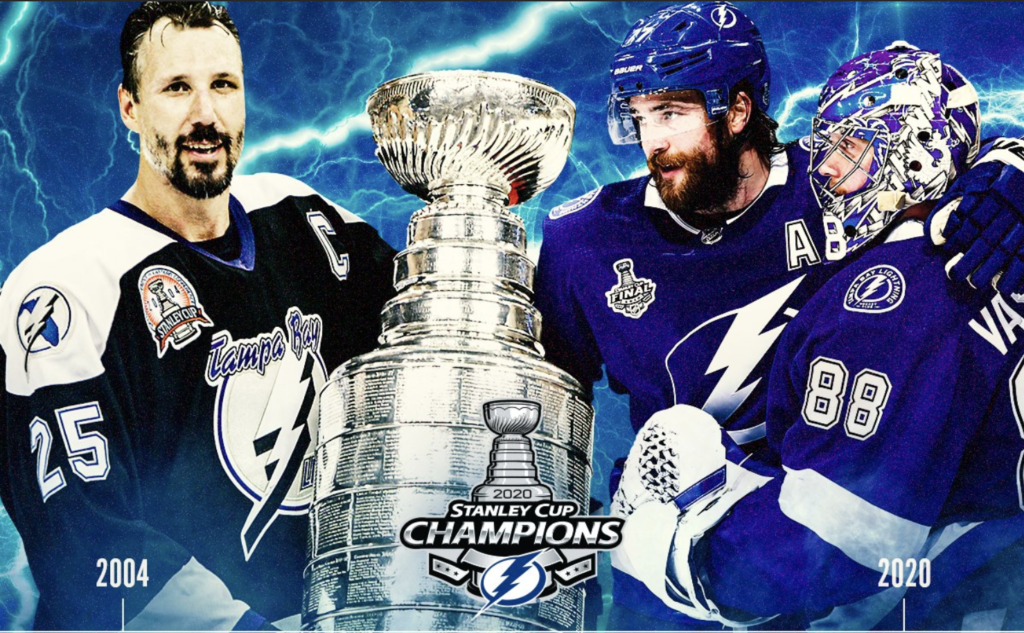 Salute to the Stanley Cup Champions

The Tampa Bay Lightning are the winners of the NHL’s restart.

Tampa Bay won its second Stanley Cup in franchise history, and the first professional sports championship ever awarded inside a heavily-sanitized bubble, with a 2-0 victory over the Dallas Stars in Game 6 on Monday night in Edmonton.

Brayden Point and Blake Coleman had the goals for the Lightning, while Andrei Vasilevskiy waited until his 16th and final win to record a shutout this postseason with 22 saves.

The loss ends a magical run for the Stars, who seemed to simply run out of gas after an improbable run inside the NHL bubble.

All that asterisk talk, what a waste of breath.

Where this championship ranks on the spectrum of difficulty is for someone else to determine, but in no way should this accomplishment for the Lightning be looked at differently or considered anything less.

The Lightning are full value for this championship, having won 16 games (plus two in the qualification round) and losing just six times, all while living in a hotel for 65 days.

That’s over two months away from family, without the comforts of home, and with bed sheets tucked way too tight under the hotel mattresses every. Single. Night.

The celebration might not be the same, and who knows if the Lightning will have a parade, but this is an extraordinary feat for a franchise that truly earned it.

Fair is fair: after waxing on about Jim Nill and the additions of Joe Pavelski and Corey Perry after Game 5, it’s time to bring up the work of Julian BriseBois, who in no way should be discredited for inheriting an exceptional core group from Steve Yzerman.

Because his impact has been undeniable.

Demonstrating this as such, two of his key additions combined for the second Lightning goal in their title-clinching victory, with Patrick Maroon’s brilliant takeaway on a low-percentage pass from Alexander Radulov directly leading to Blake Coleman’s one-touch finish and insurance marker seven minutes into the second period.

Maroon was a free acquisition for the Lightning, who valued his character and ability to contribute lower in the lineup following a Stanley Cup season with the St. Louis Blues. Meanwhile Coleman, a trade-deadline acquisition, was one of two players the Lightning spent a first-round draft pick to acquire in an effort to rebuild the bottom six.

What was the most impressive thing about Brayden Point’s icebreaker in Game 6? The clean zone entry? How about the follow-up?

May I suggest the head fake that started it all?

If you were wondering how Point was left with so much room to step into his shot and collect the rebound, it was because Victor Hedman broke the ankles of Mattias Janmark in the opposite zone with a devastating head fake on his puck retrieval.

Janmark managed to sprint back into the zone, but finished a half step behind as Point deposited the rebound into the back of the net.

It seemed possible in the moment that Point’s goal would swing the Conn Smythe in his favour, and away from Hedman, but it wouldn’t have happened without the defender’s ability to shake free and create a numbers advantage for the Lightning in transition.