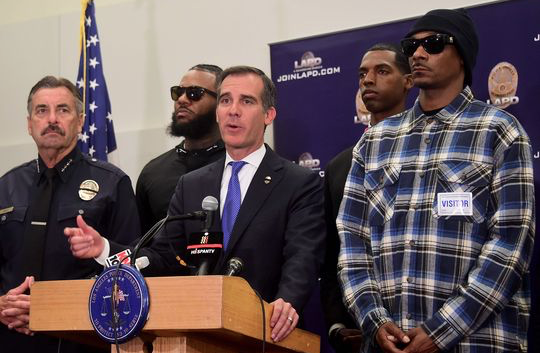 Snoop Dogg and The Game Lead Peace March in LA

After leading a peaceful march downtown in advance of the Los Angeles Police Department’s graduation ceremony Friday morning (July 8), Snoop Dogg and The Game were invited inside police headquarters for a closed-door discussion with Mayor Eric Garcetti and LAPD chief of police Charlie Beck.

“It went well,” Snoop Dogg told Billboardafter he and The Game emerged from the session. “We were just in there trying to build up dialogue between the police and the community.”

“For many years, there’s not been any dialogue,” Snoop continued as a group of about 100 or so bystanders shouted for unity. “It’s just been violence and misunderstanding. We want to bridge the communication gap between the community and the police. That’s what I’m here for, because I could definitely turn it up and go violent. But we wanted to come out here to initiate love and peace. The mayor and chief of police offered us a room inside where we could talk. And they listened to us.”

Asked if they had been planning the march in advance of the Dallas tragedy, Snoop Dogg added, “Yes, we were coming because it’s been happening too long.”

Malcolm Harvis, a member of the Game-founded Operation H.U.N.T., echoed Snoop Dogg’s comments. He and other members of H.U.N.T. began congregating at 5:15 a.m. at Third and Boylston, about a mile away from LAPD headquarters. Also joining them were members of the Nation of Islam. According to Harvis, H.U.N.T. stands for: “Hunt Us Not Today, Hunt You Not Today; Hate Us Not Today, Hate You Not Today.”

“At the end of the day, The Game is a father first and foremost,” Harvis said. “That’s what is resonating with him. We have to build the world for the future. And it isn’t just about blacks today. It’s for any man who believes in not projecting hate. We’re here in peaceful protest to start talks today to reintroduce our community to the LAPD; to create a new dialogue and a new narrative for the future as we rebuild our relationships with each other.”

Unity was the prevailing theme as a peaceful crowd of about 150 or so people milled around the LAPD Administration Building Plaza, engaging with each other and several of the police officers standing outside. At one point, a group of blacks and Latinos began chanting in unison: “We are all, we are one; black and brown standing tall.”