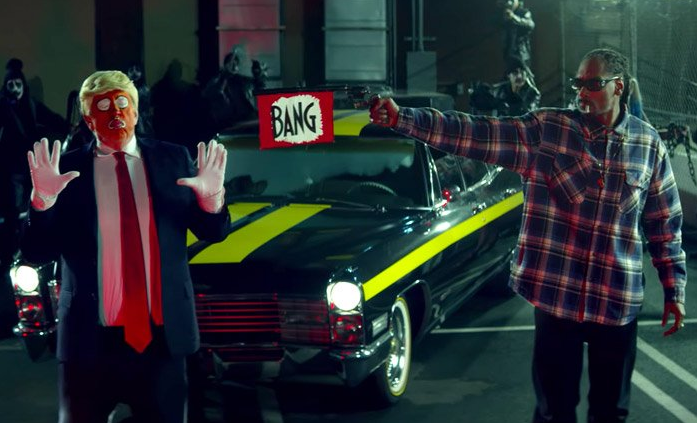 In the video for the song “BADBADNOTGOOD,” Snoop Dogg raps about police brutality in a world inhabited by clowns.

“This is the final call,” he says before pointing a gun at the clown dressed as Trump who is smoking a cigarette. Snoop pulls the trigger and a flag that says “bang” shoots out from the toy gun.

Later in the video, the Trump clown is wrapped in metal chains.

“The whole world is clownin’ around,” the rapper told Billboard.

“I feel like it’s a lot of people making cool records, having fun, partying, but nobody’s dealing with the real issue with this f–king clown as president,” he added. “And the s–t that we dealing with out here, so I wanted to take time out to push pause on a party record and make one of these records for the time being.”

Florida Sen. Marco Rubio spoke out against the video telling TMZ that “Snoop shouldn’t have done that.” He said “we’ve had presidents assassinated before in this country, so anything like that is something people should really careful about.” He adds that if the “wrong person sees that and gets the wrong idea, you could have a real problem.”