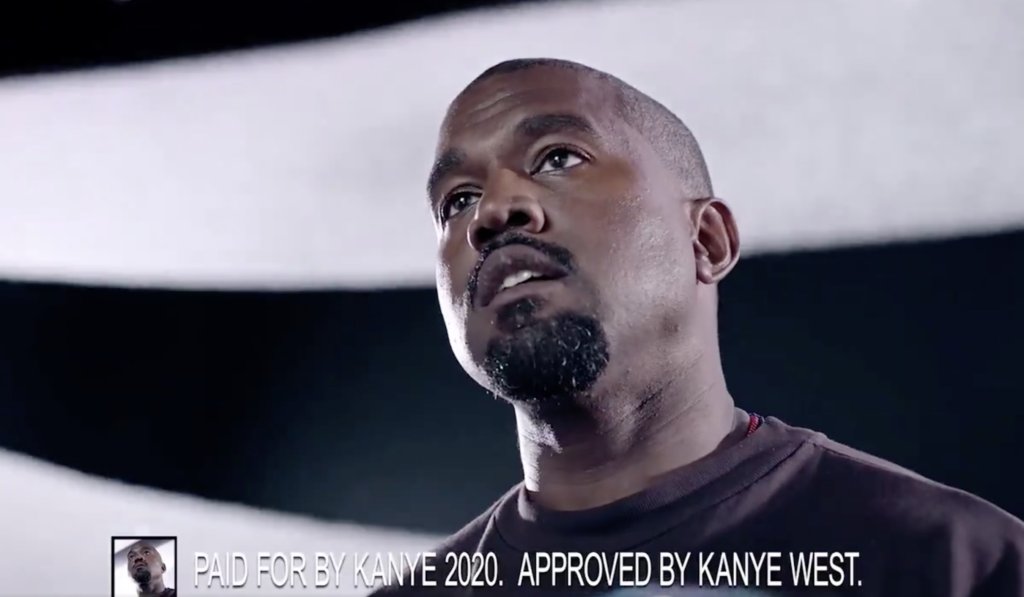 The 2020 general election is just 22 days away, and Kanye West is still on the campaign trail.

The rapper unveiled his first campaign video on Monday (Oct. 12) on Twitter with the caption, “we stepping out on faith.” In the religion-based clip, West is seen against a black-and-white American flag, as segments of families praying and helping each other weave through the montage. “What is America’s destiny? What is best for our nation, our people? What is just, true justice? We have to think about all these things, together as a people,” West proclaims as he looks slightly off-camera.

“To contemplate our future, to live up to our dream, we must have vision,” he continued. “We as a people will revive our nation’s commitment to faith, to what our Constitution calls ‘the free exercise of religion,; including, of course, prayer. Through prayer, faith can be restored. We as a people are called to a greater purpose than ourselves. We are not only a beacon to the world, but we should be servants to each other, to encourage each other, to help each other, to lift up each other—our fellow Americans, that we may all prosper together.”ARTIST MENTIONEDKanye West

“We have to act on faith, with the sure knowledge that we are pursuing the right goals and doing the right things,” he concluded. “We will build a stronger country, by building stronger families. Families are the building blocks of society, of a nation. By turning to faith, we will be the kind of nation, the kind of people God intends us to be.”

“I’m Kanye West and I approve this message,” the clip ends.

The video is also available on West’s campaign website, which features merch available for purchase, a donation button and his official “presidential platform.” The 10-bullet plan lays out a commitment to “restore faith” through “prayer in the classroom” and other “spiritual foundations;” reduce household debut and student loan debt; provide the “widest possible range” of educational opportunities; maintain national defense; reform the legal and criminal justice system; reform policing; focus on environmental concerns; put Americans’ “best interest first and foremost in dealing with foreign affairs;” support “faith-based groups” and giving the arts the opportunity to be an “important source of innovation and development of other national strengths and resources.”

West is on the ballot in 12 states, including Arkansas, Colorado, Idaho, Iowa, Kentucky, Louisiana, Minnesota, Mississippi, Oklahoma, Tennessee, Utah and Vermont. West also made it clear on Monday that he is not AIP candidate Rocky LaFuente’s vice presidential running mate, as some California sample ballots indicated.

“I am campaigning to be the next President of our great country — not Vice President,” West said in a press statement. “The political party in California that listed my name as its VP candidate has done so without my knowledge.”