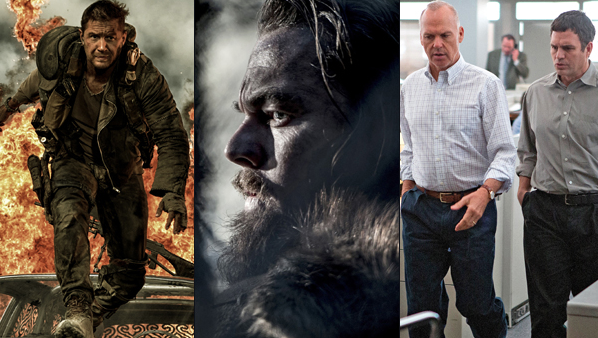 Amy Schumer won for lead actress in a comedy for “Trainwreck.” Schumer was also presented with the MVP Award, and was greeted with a standing ovation as she accepted the honor from “Trainwreck” director Judd Apatow.

The cast of “Spotlight,” the acclaimed film about journalists at the Boston Globe investigating allegations of child sex abuse in the Catholic Church, was also honored for acting ensemble. In accepting the award, costar Rachel McAdams paid tribute to the reporters and editors portrayed in the film, calling them “the real-life heroes of ‘Spotlight.'”

“Ex Machina” was named best sci-fi-horror movie. The film’s star, Alicia Vikander, called the movie “the best experience I’ve had.” It was a big night for Vikander, who also won supporting actress for “The Danish Girl.”

Sylvester Stallone won supporting actor for reprising his Rocky Balboa character in “Creed.” The actor, who received a standing ovation as he took the stage, thanked the film’s co-writer and director, Ryan Coogler (“You made it all special”), and star Michael B. Jordan (“You’re a special talent”).

Jacob Tremblay, the 9-year-old star of “Room,” won for  young actor in a movie. “This is super cool,” said Tremblay. “I want to thank my parents and I love them very much.” He added that he was going to put the award “next to my Millennium Falcon.””

“Son of Saul” won best foreign film, while the best animated film award went to “Inside Out.” “Amy,” about the late singer Amy Winehouse, won for best documentary.

“See You Again,” the touching ballad dedicated to Paul Walker, the late star of “Furious 7,” won for best song.

FX’s “Fargo” was a big winner in the category for movie or limited series made for TV, winning for best movie,  actress Kirsten Dunst, supporting actor Jesse Plemons and supporting actress Jean Smart.

Idris Elba won for actor in a TV movie or limited series for his role in “Luther.”

The fan-voted Most Bingeworthy Show Award went to “Outlander.”

The awards were presented at the Barker Hangar in Santa Monica and aired live on A&E, Lifetime and LMN. Actor-comedian T.J. Miller was the host.

BEST ANIMATED FEATURE – “Inside Out”

BEST ACTOR IN A COMEDY – Christian Bale, “The Big Short”

BEST ACTOR IN A MOVIE MADE FOR TELEVISION OR LIMITED SERIES – Idris Elba, Luther, BBC America

BEST ACTRESS IN A MOVIE MADE FOR TELEVISION OR LIMITED SERIES – Kirsten Dunst, Fargo, FX Networks