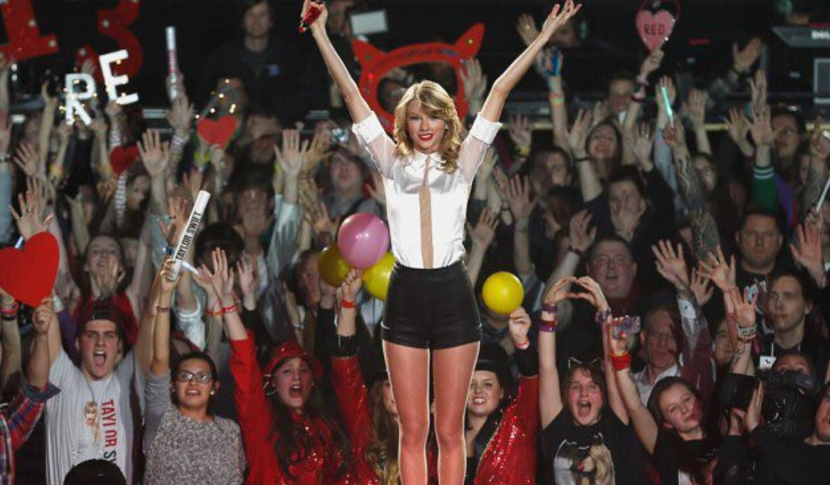 A jury in Denver awarded Taylor Swift $1 in damages, ruling in U.S. District Court Monday afternoon that former country DJ David Mueller “assaulted” and “battered” the pop superstar during a photo shoot before a 2013 concert at the Pepsi Center.

After the judge read the verdict, Swift and her mother, Andrea Swift, blinked back tears and the singer mouthed “thank you” to her attorneys. Meanwhile, Mueller stood alone, hunched, in his usual courtroom outfit of dark suit and dark tie, until his attorney, Gabriel McFarland, walked over and gently patted him on the back.

Neither Swift, Mueller nor their attorneys gave statements or held press conferences afterwards, although the singer’s team spent their final moments in the courtroom backslapping and embracing each other. During closing statements earlier Monday, Douglas Baldridge, Swift’s attorney, had said, “The guy did it. Don’t be fooled. Don’t be snookered.”

The jury of six women and two men took roughly four hours to render its verdict. In addition to Swift’s claim, the jury found that two members of her management team, her mother and radio specialist Frank Bell, did not “interfere” in country radio station KYGO’s decision to terminate morning-show host Mueller’s $150,000-per-year contract two days after the assault. Throughout the weeklong trial, Swift and members of her team testified unequivocally, as she put it on the witness stand last week, Mueller “reached under my skirt and grabbed my ass.”

By contrast, over two days of testimony early last week, Mueller, 55, struggled to remember details, sighed and expressed frustration during questioning. He denied inappropriate touching and called what happened in the photo booth “awkward” — in “jostling” to put his arm around Swift, he said he may have mistakenly grazed her rib. Swift unequovically called it “assault.”

Mueller sued Swift, now 27, for defamation in 2015; Swift counter-sued Mueller for assault, and the civil trial opened a week ago.

Earlier Monday, McFarland disparaged Swift’s photographer and bodyguard who witnessed the incident — he called Stephanie Simbeck a non-credible employee-loyalist and “deer in the headlights” and ripped Greg Dent for doing nothing after the incident, “not even get on the phone and make a phone call.” McFarland dissected a photo, shown repeatedly during the trial, of Swift posing between Mueller and his then-girlfriend, Shannon Melcher. In the shot, Mueller’s arm is clearly behind Swift’s waist, angling down, but his hand is not visible.

McFarland wondered what motive Mueller could have for committing an assault against a singer he’d never met when he’d just become a morning-show host — while a photographer captured the whole thing. “I don’t know what kind of person grabs or gropes a powerful music star, but it’s not that guy,” McFarland said. “It’s not the guy standing next to a woman he loves. It’s not the guy who just landed his dream job with his best friend in the mountains of Denver.”

During McFarland’s statement, Swift, 27, accepted tissues from her mother in the courtroom and blew her nose, repeatedly shaking her head silently and resting her face in her palm. She wore a black turtleneck dress and had her hair pulled back, as usual, in the courtroom.

The more effective attorney, by far, was Baldridge, aggressive and fast-talking, who fastened his glasses together on a string around his neck before speaking. In his closing statement Monday, Baldridge showed a photo of another adult couple posing with Swift at the photo shoot and noted the man put his arm around her shoulder. “It goes where my arm goes when I give a hug to my daughters’ good friends,” he said. “I don’t go anywhere near their rear ends.

Mueller had asked for $257,000 in damages, enough to make up for the money he lost from his terminated contract. Swift asked for a symbolic $1. “That single dollar is of immeasurable value,” Baldridge said earlier Monday during his statement. “It means no means no, and it tells every woman that they will determine what is tolerated with their body.”