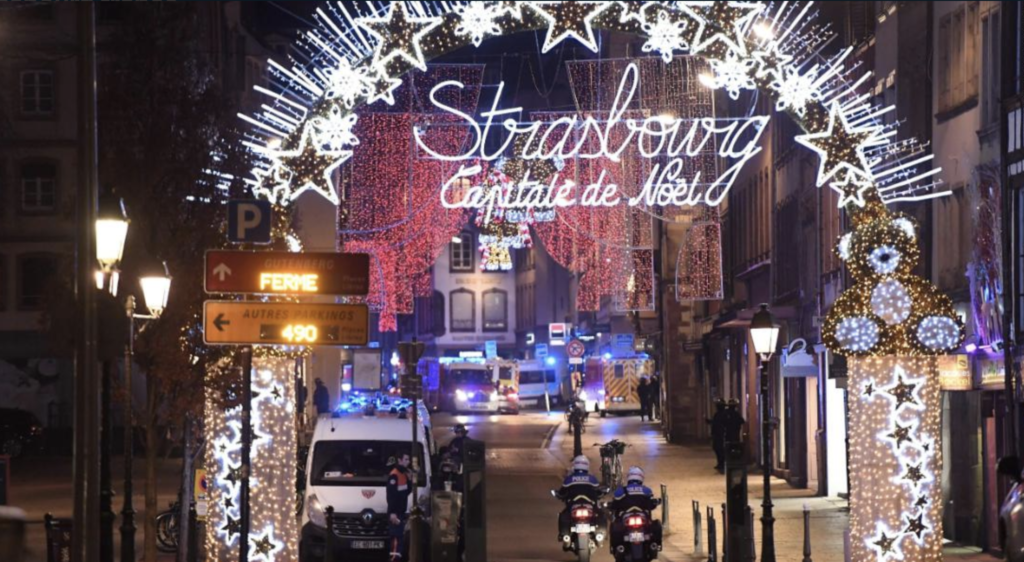 Police searched through eastern France on Wednesday for a man suspected of killing at least two people in a gun attack on a Christmas market in Strasbourg and who was known to have been religiously radicalized while in jail.

Witnesses told investigators the assailant cried out “Allahu Akbar” (God is Greater) as he launched his attack on the market, the Paris prosecutor said.

The prosecutor, Remy Heitz, also suggested the suspect may have chosen his target for its religious symbolism.

“Considering the target, his way of operating, his profile and the testimonies of those who heard him yell ‘Allahu Akbar’, the anti-terrorist police has been called into action,” Heitz told a news conference.

Police identified the suspect as Strasbourg-born Cherif Chekatt, 29, who is on an intelligence services watch list as a potential security risk.

An investigation had been opened into alleged murder with terrorist intent and suspected ties to terrorist networks with intent to commit crimes, Heitz said.

Two people were killed and a third person was brain-dead and being kept alive on life support, he said. Six other victims were fighting for their lives.

France raised its security threat to the highest alert level, strengthening controls on its border with Germany as elite commandos backed by helicopters hunted for the suspect.

French and German agents checked vehicles and public transport crossing the Rhine river, along which the Franco-German frontier runs, backing up traffic in both directions. Hundreds of French troops and police were taking part in the manhunt.

Deputy Interior Minister Laurent Nunez said he could not rule out that the fugitive had already crossed the frontier.

The gunman struck at about 1900 GMT on Tuesday, just as the picturesque Christmas market in the historic city was shutting down.

He engaged in two gunfights with security forces as he evaded a police dragnet and bragged about his acts to the driver of a taxi that he commandeered, prosecutor Heitz said.

No one has yet claimed responsibility, but the U.S.-based Site intelligence group, which monitors jihadist websites, said Islamic State supporters were celebrating.

French and German security officials painted a portrait of Chekatt as a serial law-breaker who had racked up more than two dozen convictions in France, Germany and Switzerland, and served time in prison.

“It was during these spells in jail that we detected a radicalization in his religious practices. But we there were never signs he was preparing an attack,” Minister Nunez said.

One German security source said the suspect was jailed in southern Germany from August 2016 to February 2017 for aggravated theft but was released before the end of his 27-month sentence so that he could be deported to France.

“He was banned from re-entering Germany at the same time”, the security source in the state of Baden-Wuerttemberg said. “We don’t have any knowledge of any kind of radicalization.”

In 2016, a truck plowed into a Bastille Day crowd in Nice, killing more than 80 people. In November 2015, coordinated Islamist militant attacks on the Bataclan concert hall and other sites in Paris claimed about 130 lives.

There have also been attacks in Paris on police on the Champs-Elysees avenue, the offices of satirical weekly publication Charlie Hebdo and a kosher store.

A man drove a trunk into a crowd at a Christmas market in Berlin in December 2016, killing 12 people.