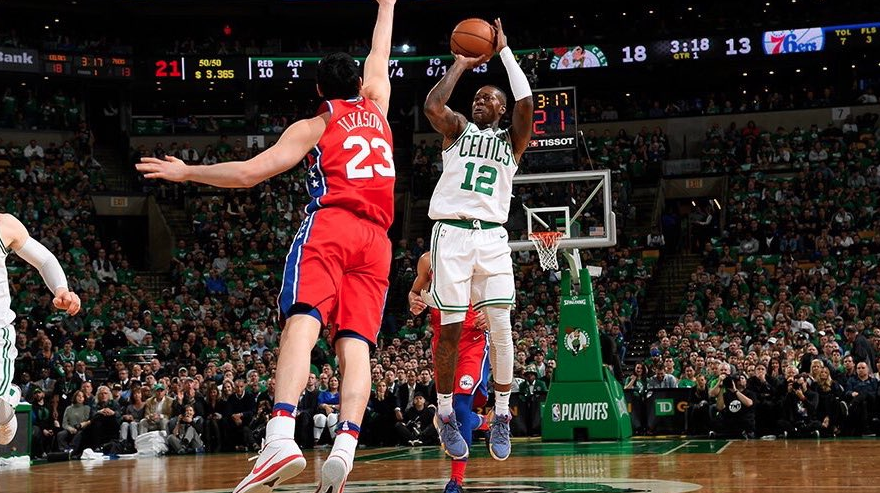 The Celtics Have A New Star

Boston’s rising stars stalled “The Process” and led the Celtics to victory in Game 1 of the Eastern Conference semifinals.

With much of the attention focused on 76ers youngsters Simmons and Joel Embiid, Boston’s youth movement of Tatum and Rozier led the way. Two days after scoring a career playoff-high 26 points in Game 7 against Milwaukee, Rozier topped it, while also adding eight rebounds and six assists.

“It’s been a dream come true. I want to keep going,” said Rozier, who was wearing a Drew Bledsoe Patriots jersey to milk one more chuckle out of his pseudo-feud with vanquished Bucks guard Eric Bledsoe. “I’m just a guy just living in the moment.”

Embiid scored 31 points with 13 rebounds for Philadelphia, which lost for just the second time in 22 games. Simmons, the likely Rookie of the Year, scored 18 with seven boards and six assists.

But with six days of rest since eliminating Miami, the Sixers missed 15 of their first 20 shots and hit 5-of-26 from 3-point range to lose for just the second time since March 13.

“We’re NBA players and we have to be ready,” Embiid said. “We weren’t ready tonight.”

Al Horford had 26 points and seven rebounds for Boston, which will host Game 2 on Thursday night. The Celtics are hoping to have guard Jaylen Brown back from a hamstring injury he sustained in the clincher against the Bucks, leaving him sidelined along with Kyrie Irving and Gordon Hayward.

Playing in place of Irving, Rozier picked up where he left off in the first round by scoring 10 points with six assists in the first quarter on Monday night. He was 7-of-9 from 3-point range overall, combining with Tatum to overshadow the lottery picks accumulated by Philadelphia during “The Process.”

The first overall pick in the 2016 draft who sat out all of last year with an injury, Simmons was heckled by the Boston crowd with chants of “Not a Rookie!” In the fourth quarter, as Tatum stepped to the free throw line to protect a double-digit lead, the chant turned to “He’s a Rookie!”

“I love when people talk trash,” Embiid said. “Keep bringing it, and we’ll see how it goes.”

Tatum was Boston’s first pick last year — third overall — after swapping the No. 1 pick to the Sixers and grabbing a 2018 first-rounder as well. Philadelphia picked Markelle Fultz, who did not play on Monday night.

“It’s been great to see Jayson and Terry and just our guys play like that,” Horford said. “I think that Jayson’s starting to figure it out. … And it’s great to see for our team.”

It was 33-all with just over seven minutes left in the half when the Celtics ran off 10 points in a row. Horford had four of the five baskets and assisted on the other. Boston led 87-70 in the final minute of the third quarter when Philadelphia scored nine straight points to make it a nine-point game.

After Simmons made a layup to make it 97-88, Horford hit a 3 from the top of the key with 5:30 left and it was never within single digits again.