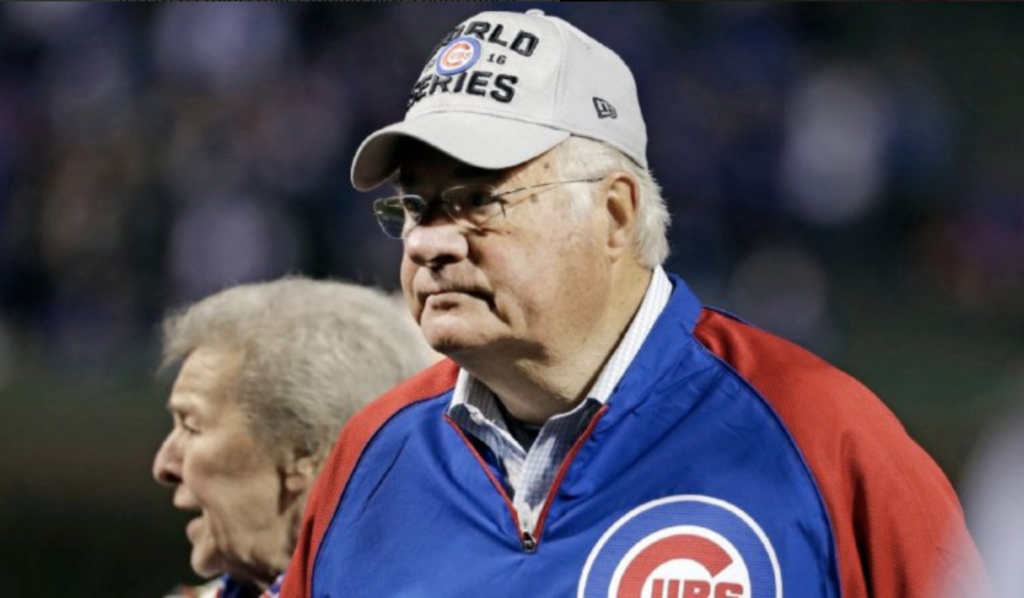 The Cubs Owner Is A Racist and Here’s Proof

An explosive collection of emails purportedly connected to Joe Ricketts, the patriarch of the family that owns the Chicago Cubs, was published by Splinter on Monday.

In the emails, the 77-year-old Ricketts appears to rail against Muslims, promote conspiracy theories about former president Barack Obama and laugh at jokes which include punchlines about racial slurs and the deaths of people of color.

In one such email to a family friend from 2012 in which he mentions he’s considering having a book written called “Islam, Religion or Cult,” Ricketts outright states that he considers Muslims to be his enemy.

“Christians and Jews can have a mutual respect for each other to create a civil society. As you know, Islam cannot do that. Therefore we cannot ever let Islam become a large part of our society. Muslims are naturally my (our) enemy due to their deep antagonism and bias against non-Muslims.

In other emails from 2011 and 2012, Ricketts forwards articles to acquaintances that claim Obama is suppressing a video in which he verbally admits to being a Muslim and that Obama has a secret past as a gay sex worker and drug mule. Ricketts also laments how he believes Obama favors Muslims over other religions in a 2010 email.

My impression is that the President is more sympatric to Muslims than Christians/Jews. We are a Christian country and I feel like this is just a continuation of the assault on Christianity in America. My feeling (sic) are that I don’t like it.

In response to a reply from his son Pete Ricketts, the current governor of Nebraska, requesting that he confirm the validity of his forwards through Snopes.com, Ricketts states he believes Islam “is a cult and not a religion” and that it is “based on ‘kill the infidel’ a thing of evil.”

There were also several emails that consisted of short replies to forwards from other sources, some of which are compiled below along with what they were responding to:

Who is Cubs owner Joe Ricketts?

Ricketts is the patriarch of the Ricketts family that purchased a 95 percent stake in the Cubs in 2009. Born and raised in Nebraska, Ricketts made his fortune as the co-founder of brokerage firm TD Ameritrade.

While Ricketts is not involved in the Cubs’ operations, his four children make up four of the five members of the team’s board of directors, including team chairman Tom Ricketts.

Beyond their Cubs ownership, the Ricketts family is also well known for their influence in the world of conservative politics. Pete Ricketts, the family’s eldest son, is the current governor of Nebraska, while Todd Ricketts was named the finance chairman of President Donald Trump’s re-election campaign on Friday.

Ricketts released a statement through his personal website on Monday night apologizing for the content of the emails:

I deeply regret and apologize for some of the exchanges I had in my emails. Sometimes I received emails that I should have condemned. Other times I’ve said things that don’t reflect my value system. I strongly believe that bigoted ideas are wrong.

Tom Ricketts also responded with a statement released to The Athletic, denouncing the statements and noting that his father is not involved in the operations of the Cubs, outside of owning a portion of them:

We are aware of the racially insensitive emails in my father’s account that were published by an online media outlet. Let me be clear: The language and views expressed in those emails have no place in our society.

My father is not involved with the operation of the Chicago Cubs in any way. I am trusted with representing this organization and our fans with a respect for people from all backgrounds. These emails do not reflect the culture we’ve worked so hard to build at the Chicago Cubs since 2009.