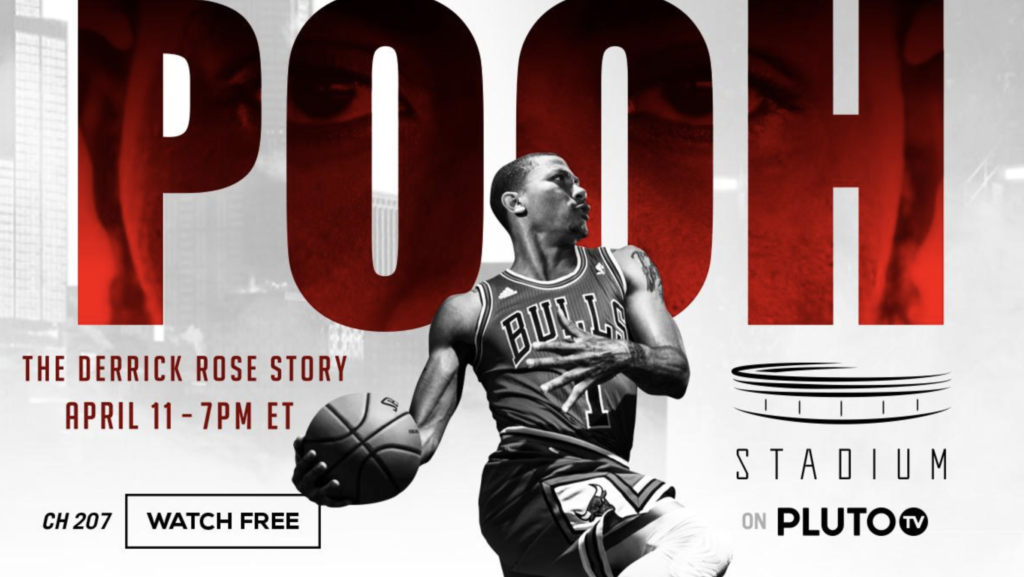 Derrick Rose hadn’t been working with a film crew for long when it captured a life-changing moment.

On June 22, 2016, he was being interviewed by a producer when he received a call from his agent, B.J. Armstrong. The Bulls had traded Rose to the Knicks, and he was stunned.

His eyes red and watery, it looked like he wouldn’t be able to continue. But he gave the go-ahead, and the interview took on the feel of a therapy session.

It’s the most poignant scene in the documentary “Pooh: The Derrick Rose Story,” which premiered Thursday on Stadium and WatchStadium.com/Live and will re-air at 4 and 7:30 p.m. Sunday. The film traces Rose’s life from his childhood in Englewood to the beginning of this season with the Timberwolves. Interviews with family, friends, media, Bulls brass and others help tell the story.

That scene is emblematic of the authenticity Rose and Armstrong, two of the executive producers, successfully deliver. Rose isn’t the only one driven to tears, and there’s enough critical analysis from those close to him to make viewers feel they aren’t being fed a sugar-coated version of events. The film certainly highlights his accomplishments, but it achieves a balance that gives it credibility.

“We agreed that if we were going to tell this story, it has to be an authentic story, the good, the bad and the indifferent,” Armstrong said this week. “Not have the cameras on at a strategic time, to have the cameras on all the time, and he had to be comfortable seeing the true story.

“This isn’t like a puff piece where we’re going to tell just the good things that happened and in the end he comes and rides off into the sunset. This is really what happened.”

Armstrong said the impetus for the film was Rose’s controversial decision not to play in the 2012-13 season after he suffered a torn anterior cruciate ligament in his left knee in Game 1 of the 2012 playoffs.

“Derrick never said anything, none of us really said anything about it other than he was just trying to get himself healthy and get back on the court,” Armstrong said. “And after going through the process, he said he wanted to tell his story when he was ready to tell it, but he wanted to do it in a way as it was happening.”

The injury marked the turning point in Rose’s story. To many, he went from being part of the Bulls’ solution to part of the problem. In the film, Chicago media members weighed in on the backlash. They also showed the role the media played in the story. Laurence Holmes of 670 The Score, who was among those interviewed, wondered if they weren’t just informing opinions, but forming them, as well.

“I think in some cases we probably did more creating than reflecting,” Holmes said this week. “But I think once we got toward the end of Derrick’s tenure with the Bulls, I felt like we were almost having to push back against some of the extreme takes. The takes got so hot that we were all like, no, he’s a person, and we need to be cognizant of what we’re doing.”

The film also touches on Rose’s much-criticized “graduations and meetings” remark in November 2014, the rape accusation against him and two friends in August 2015 (a federal grand jury cleared them) and going AWOL with the Knicks in January 2017. Armstrong admitted to being nervous about how revealing Rose would be considering he’s private and protective of his space.

“We had some very tough conversations because you have to have the integrity to do the very best that you can do for the art,” Armstrong said. “I give Derrick all the credit because he was the one who many times said don’t cut the camera off, let it roll.”

Rose’s story would have been perfect for ESPN’s “30 for 30” series of documentaries. But Armstrong said they went with Stadium because the network is based in Chicago and it’s free to watch. In addition to being available online, Stadium is the only over-the-air sports network in the country. This was Stadium’s first foray into filmmaking, and it acquitted itself well under the guidance of producer/director Scott Diener.

“He wanted all of his fans, especially young kids who came up under the same conditions he did, to not have to worry about how they were going to see this,” Armstrong said.

He also wanted to impart what he learned from his rise and fall with the Bulls.

“He wanted to show a real person dealing with the issues of being a professional athlete today,” Armstrong said. “And hopefully some kid will learn from this. The one lesson he wanted to come across is that, yeah, it’s tough, but we’ve got to keep pushing and keep moving forward.”