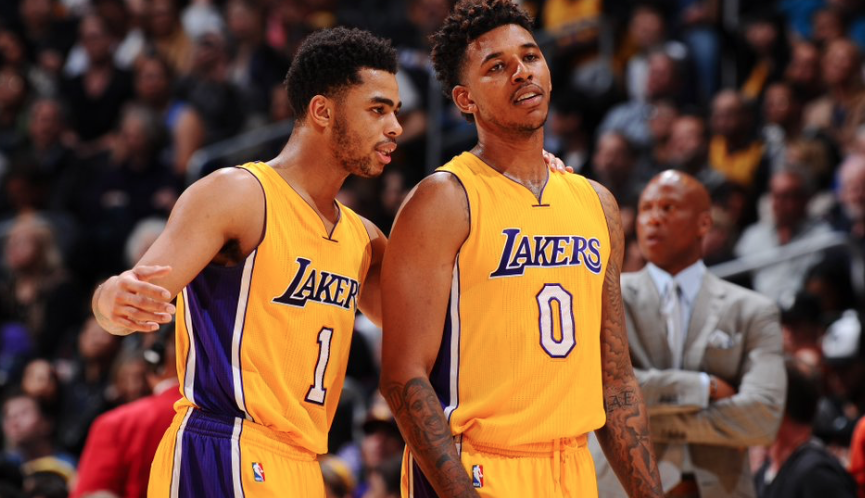 Some Lakers players have distanced themselves from rookie D’Angelo Russell after a video surfaced a few days ago in which he secretly recorded teammate Nick Young talking about women other than his fiancee, Iggy Azalea.

Russell and Young are friends but the video, which was surreptitiously shot a couple of months ago according to a person with knowledge of it, could drive a wedge between them and cause more problems for a team with a 15-59 record.

Other teammates are “ticked off” at Russell, according to a person familiar with the situation, believing he violated an unwritten code with the secret video.

It was unclear who released the video to celebrity gossip site Fameolous or why it took so long to be publicized from the time Russell shot it.

ESPN.com first reported the rift between Russell and his teammates, adding that Russell ate at a table by himself during a recent breakfast meeting. It was believed to be Monday morning in Utah, where the Lakers later fell by 48 points to the Jazz, tying the franchise record for largest loss.

Young did not attend that game because he had intestinal flu-like symptoms, the team said. He is engaged to Azalea but appeared to acknowledge meeting another woman at a club in the video.

Russell asked Young in the dimly lit video, “You was 30 and she was 19?” an apparent reference to the age differential between Young and the woman. Young did not know he was being filmed.

The Lakers were disappointed in Russell’s judgment and chalked it up to immaturity.

“D’Angelo is sometimes 20 going on 14,” said a person familiar with the situation. “They’ve all been trying to prank each other this season. This was a stupid prank.”

Young and Lakers teammate Jordan Clarkson made headlines last week when they were accused of harassing a woman and her 68-year-old mother while driving in Hollywood.

An internal Lakers investigation was inconclusive, saying there were “different interpretations of what happened.”

The Lakers currently do not plan on punishing Russell, hoping he accepts his mistake and learns from it.

There are eight games left in the Lakers’ season, including Wednesday against Miami at Staples Center. They are on pace to finish with the worst winning percentage in their 68-year history.