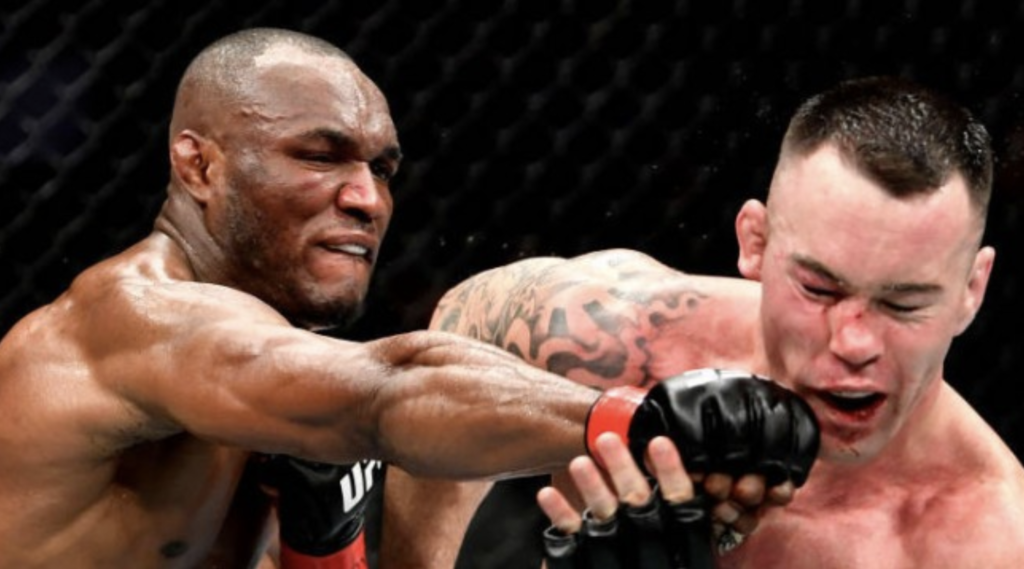 The Nigerian NIGHTMARE Is Still The UFC 245 Champ

Kamaru Usman finished the trash-talking Covington via TKO at 4:10 of the fifth round in the main event of UFC 245 on Saturday night at T-Mobile Arena. With the win, Usman retained his UFC welterweight title and quieted Covington’s barbs, at least temporarily.

“I heard all week, all month, since the fight got signed, everyone is like, ‘Oh, Colby is in his head, Colby is this, Colby is that. He’s gonna gas out, fight emotional.’ I’m telling you guys right now that the reason why I’m the best in the world is because my mind is stronger than anyone in the division.”

It was the second-latest stoppage in a title fight in UFC history and came in a very close fight up until that point. Covington did very well in the early rounds, while Usman rallied in the third and fourth.

After the third round, Covington told his corner that he believed he had a broken jaw. Covington was transported to the hospital following the fight, and a UFC spokesperson said it was determined that Covington “suffered a non-displaced midline mandible fracture.”

The end came in the fifth when Usman dropped Covington with a right hand. Covington got to his feet, but Usman dropped him with another right. Usman closed in and flurried on the ground with hammer fists as Covington attempted a takedown. Referee Marc Goddard stepped in to call it a TKO, a call Covington protested immediately afterward and later on Twitter, saying Goddard “robbed” him and “robbed the people of a fair fight.”

The scorecards afterward were differing. Heading into the fifth, one judge had it for Covington 39-37, another had it for Usman 39-37 and the third had it tied 38-38. The scores don’t matter now, though, with Usman earning the finish.

Usman said afterward that his victory isn’t just for him, but for everyone, mentioning the country of Brazil, which Covington has described as a “dump” and the residents of which he has called “filthy animals.”

“This one is for the whole entire world right now,” Usman said.

The Las Vegas crowd, though, was pro-Covington throughout the bout, chanting “Colby!” and “USA!” Usman is an American citizen and longtime U.S. resident but was born in Nigeria.

Covington started the bout peppering Usman with left hands out of the southpaw stance. He landed solidly over the first two rounds. In the second, Usman started digging hard body punches and those seemed to add up as the fight went on.

In the third, momentum changed. Usman landed more hard body shots and big right hands to Covington’s face, which started to bleed and redden. It was after that round that Covington told his corner about his injured jaw, but he continued throwing and standing in the pocket with Usman despite that possible severe injury. Covington landed nice uppercuts in the fourth, a very close round in which Usman also landed hard right hands.

Covington started the fifth round well, landing left hands. But Usman clearly carried his power into the late rounds, and those two right hands put Covington on the mat. Goddard had enough after the second one and Usman’s follow-up shots.

Usman was ESPN’s No. 10-ranked pound-for-pound MMA fighter coming in and the No. 1 welterweight. Covington was the No. 2 welterweight. Usman won the UFC welterweight title by beating Tyron Woodley by unanimous decision at UFC 235 on March 2.

Usman and Covington had bad blood coming in. Covington crashed Usman’s open workout before UFC 235, and the two exchanged words at the conclusion of that card. At the UFC 235 postfight news conference, Usman professed his hatred for Covington, and the two — along with Usman’s manager Ali Abdelaziz — got into a confrontation at the Palms Resort Casino buffet in Las Vegas the next day.

The feud continued in interviews and on social media, with Covington referring to Usman as “Marty Fakenewsman.” Usman was called “Marty” during his amateur wrestling career, because coaches couldn’t pronounce his first name, Kamarudeen.

Covington has embraced his role as the UFC’s biggest villain, which has almost been too effective. While the attention from his sometimes crude trash talk has earned him greater opportunities inside and outside the Octagon, Covington has also alienated many in the sport, including several of his own American Top Team teammates, such as fellow UFC star Jorge Masvidal.

Usman (16-1) has won 14 in a row, including 11 straight in the UFC — the third-longest current winning streak in the promotion. Usman’s 11-fight streak is the second longest in welterweight history behind Georges St-Pierre’s 12. Usman, 32, is one of just four fighters to start a UFC career at 11-0 or better. Anderson Silva, Khabib Nurmagomedov and Royce Gracie are the others.

Covington (15-2), the former interim welterweight champion, had a seven-fight winning streak snapped. He did not attempt a takedown in the bout despite his 5.69 takedowns per 15 minutes being the highest rate in welterweight history coming in. Covington, 31, had beaten the likes of Robbie Lawler, Demian Maia and Rafael Dos Anjos en route to the title chance.