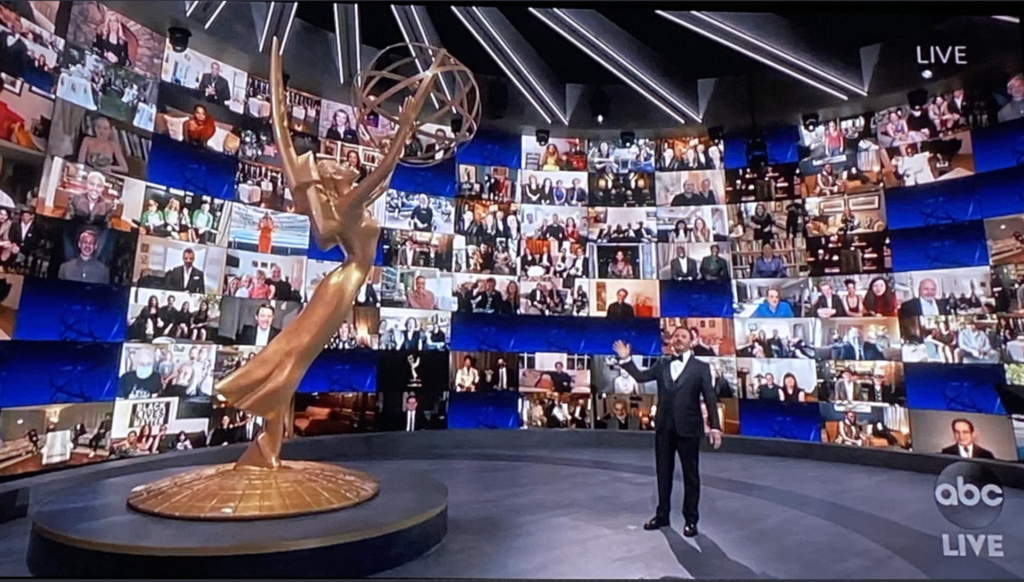 Pandemic or Not, The Show Must Go On

“Schitt’s Creek” made history for tiny Pop TV on Sunday night — just as that network is easing out of the original programming business — by fully sweeping the major Emmy comedy categories, including outstanding series. And meanwhile, who watches the ‘Watchmen’? Turns out, quite a few Emmy voters.

Then there was HBO’s fan favorite drama “Succession,” which won best drama, drama actor (Jeremy Strong), writing for a drama and directing for a drama.

That made it a huge night for the folks at Home Box Office. “Watchmen,” “Succession” and repeat winner “Last Week Tonight” gave HBO plenty of wins on the tally board, but then what really brought it home for the pay cable network was perhaps “Euphoria” star Zendaya winning best actress in a drama. “I Know This Much is True” star Mark Ruffalo also contributed to the mix, winning for lead actor in a limited series.

A year ago, when both “Game of Thrones” and “Veep” ended its run, it also seemed like HBO had just lost its two most dominant, Emmy-winning series. But somehow, the WarnerMedia-owned pay cabler outdid itself. Last year, HBO had 34 wins total (including nine during the telecast), vs. Netflix’s 27 wins (including 4 during the show). This time, HBO won 11 during the telecast, far more than Netflix’s 2.

“Obviously there was a lot of questions about, ‘what will HBO do after Game of Thrones?’ This is a very nice way to answer that,” said HBO programming president Casey Bloys. “Netflix, of course, is a huge and formidable competitor. You want to be aware of your competition but not distracted by them. At some points, the volume game will probably win because that’s mathematics. But we’ll just continue to do the kinds of shows that we believe it with people we believe in.”

Specifically for the telecast, it was a good night for cable, which won a combined 20 awards. Streamers won 3, while broadcast picked up zero.

Although, what are platform distinctions anymore? “Schitt’s Creek” definitely owes a good chunk of its success and nine total Emmys to its second run on Netflix (Eugene Levy even thanked the streamer in one of his acceptance speeches). And FX scored a win for “Mrs. America” star Uzo Aduba, who won for supporting actress in a limited series — but that’s actually a streaming-only series, via FX on Hulu. Netflix had just one win on Sunday night, tied with Apple TV Plus, which saw “The Morning Show’s” Billy Crudup win for supporting drama actor.

Playing a slightly surprising spoiler to this year’s competition: Disney Plus, which scored a strong eight Emmys in its first year of eligibility (all during the Creative Arts ceremonies last week), including seven for freshman sensation “The Mandalorian.”

The “Watchmen” and “Succession” wins ultimately gave HBO the edge over Netflix — despite Netflix’s record-breaking 160 nominations going into this year’s final round of voting, compared to 107 for HBO. After five days and 100 Creative Arts Emmy awards, as of Saturday night, the two titans entered the Sunday thunderdome at a tie: 19 awards each. But then HBO pulled ahead on Sunday night.

Meanwhile, perhaps it’s no surprise that during the most unusual Emmy season in history, voters decided to go all-in on three shows that made the most impact in their lives over the past 12 months. “Watchmen” represented a breakthrough comic book adaptation that earned accolades for how it shined a light on systemic racism and oppression in society — just as we’re finally having that conversation in real life. “Succession” was a fun, diversionary soap opera about a despicable media baron and his family that we couldn’t stop talking about last fall. And “Schitt’s Creek” was a bright light about a fractured family that a crisis forced them together, in tight corners, and gave them reason to forge a deep bond. (Because the Emmy producers lumped all of each category announcements together — likely for logistics reasons — the sweeps were all the more pronounced.)

It was a good night for Emmy prognosticators in the top categories, most of whom also had correctly identified “Schitt’s Creek,” “Succession” and “Watchmen” early on as category frontrunners. And perhaps the Television Academy’s casting peer group called it: During the Creative Arts Emmys last week, the casting teams from all three shows also won Emmys.

Besides “Last Week Tonight,” among other perennial winners: VH1’s “RuPaul’s Drag Race” scored its third consecutive win for competition series. The show won six Emmys overall this year, its most ever.

On Sunday, besides the limited series win and Emmys for King and Abdul-Mateen, “Watchmen’s” writing win went to Damon Lindelof and Cord Jefferson, for the episode “This Extraordinary Being.”

“Be careful, be clumsy, run hot, stay cool, be the bull in the china shop, pick up what you broke and glue it back together,” Lindelof said. “Don’t stop until it’s great, affirm, it’s never great enough. Dissent, be consistent, embrace paradox, never contradict yourself. And finally, stop worrying about getting cancelled and asked yourself what you are doing to get renewed.”

The “Schitt’s Creek” sweep — ahem, the “Schweep” — in the show’s final season, capped a storybook run for the show. “Schitt’s” — with its provocative title, which gave ABC censors enough concern that its logo appeared on screen whenever the word was said —began as a little-seen sitcom out of Canada but ended up a globally beloved half-hour (thanks in part to exposure on Netflix), led by comedy icons Eugene Levy and Catherine O’Hara.

Both Levy and O’Hara won individual Emmys, for actor and actress in a comedy — their first acting Emmys, and also their first Emmys, period, since they both won for writing on “SCTV” in the early 1980s. Levy co-created “Schitt’s Creek” with his son Dan Levy, easily the most decorated winner of the night, picking up Emmys for outstanding supporting actor in a comedy in addition to writing and directing nods, and then that comedy series win.

And then add Annie Murphy, who won the supporting actress comedy Emmy, while Andrew Cividino shared the directing for a comedy series Emmy with Dan Levy, both of whom won for the episode “Happy Ending.” And Levy won the comedy writing Emmy for “Happy Ending” as well. A complete sweep.

“Our show, at its core, is about the transformational effects of love and acceptance, and that is something that we need more of now than we’ve ever needed before,” Dan Levy said.

That’s the first time a comedy has ever swept the four main acting prizes, and just the second of any program ever (after “Angels in America” in 2004). The closest previously: “All in the Family” won three of the top acting awards and outstanding comedy in 1972 and 1978.

Said former Pop TV hed Brad Schwartz: “In 2015, Pop TV was a TV Guide listings channel and Schitt’s Creek was an unknown show. Against the titans of our industry, in 2020, Pop TV wins 10 Emmys and ‘Schitt’s Creek’ sets the record for most Emmys by a comedy ever, and the first sweep of all four acting categories by a show ever. The ‘Schitt’s Creek’ team, led by Dan and Eugene Levy, told stories of love, joy and acceptance that truly and deeply connected with people. The Pop TV team were passionate crusaders in supporting those stories and screaming about them to the world. It was a beautiful and deep partnership that won hearts and I couldn’t be more proud of the entire team that worked so hard to make this historic night happen.”

“Succession,” meanwhile, has been off the air for almost a year but remains a delicious crowd favorite — especially in Hollywood, where fans couldn’t get enough of it. Besides best drama and Strong’s acting win, Andrij Parekh landed the directing for a drama Emmy, via the episode “Hunting,” while creator Jesse Armstrong won the writing for a drama Emmy (his second consecutive) for the episode “This Is Not for Tears.”

“It’s such a very nice moment, and sad to not be with some of the cast and crew to share with them,” said Armstrong, whose phone started ringing during his acceptance speech. He also gave a series of “unthank yous” to the coronavirus, “to President Trump for his crummy and uncoordinated response,” and to Boris Johnson and nationalists as well.

Zendaya’s win, over stars such as Jennifer Aniston (“The Morning Show”), Laura Linney (“Ozark”), Olivia Colman (“The Crown”), Sandra Oh (“Killing Eve”) and last year’s winner, “Killing Eve’s” Jodie Comer, was perhaps the biggest surprise of the night — and a nice win for representation, youth and of course, a feather in HBO’s Sunday night cap.

What the pundits probably didn’t predict: That youth explosion. Besides Zendaya, winners included “Ozark’s” Julia Garner, who won her second consecutive Emmy for supporting actress in a drama.

Besides Garner, Maria Schrader (“Unorthodox”) won Netflix’s other Emmy of the night, for directing a limited series or movie.

Heading into the final round of Emmy voting, Netflix’s history-making nomination tally was the most ever for a network, but “Watchmen” led all programs in nominations thus year with 26 nods. On the comedy side, Amazon Prime Video’s “The Marvelous Mrs. Maisel” led the nomination crop with 20 (the same as last year). The leading dramas were Netflix’s “Ozark” and HBO’s “Succession,” both of which pulled 18 nods.