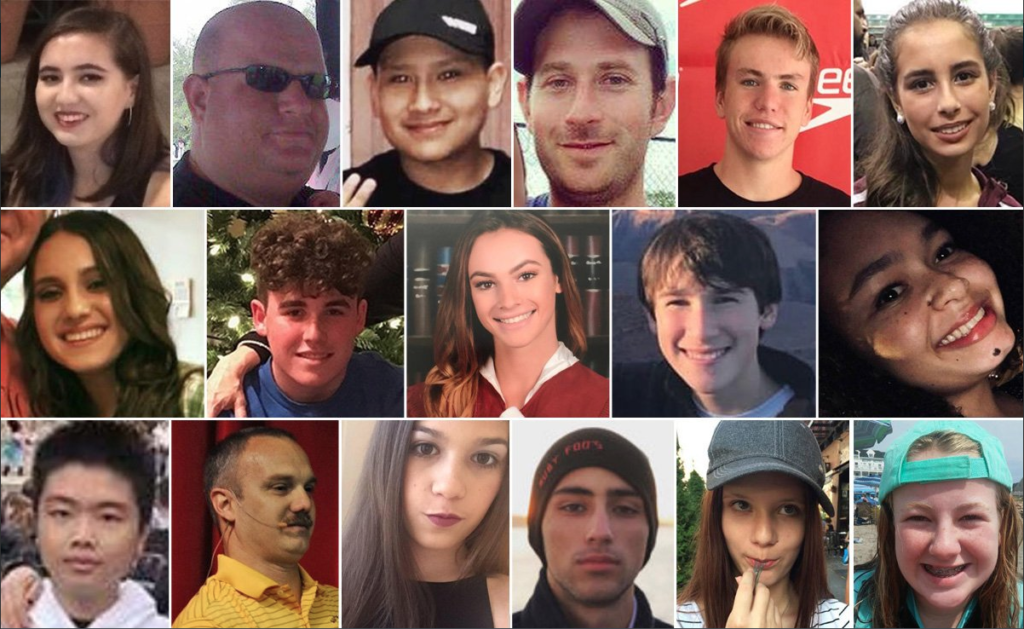 These Are The Beautiful Souls That Were Taken in Florida

Cruz was booked into the Broward County Jail early Thursday and charged with 17 counts of premeditated murder. He appeared in court for the first time Thursday and was ordered held without bond. The incident is the deadliest school shooting in the U.S. in five years.

Broward County Sheriff Scott Israel identified the 17 victims during a news conference Thursday evening. Many of the deceased had been named previously by friends and family, who shared their memories on social media.

According to Dibble, Alhadeff was a freshman who played soccer at the school.

“All she had to offer the world was love,” Alhadeff’s mother said.

Scott Beigel was a Geography teacher at the school. His death was confirmed by his friend, Matt Hipps, on Facebook. A student told “Good Morning America” that Beigel was shot when trying to lock the door to a classroom after he had let students in.

In the post, Hipps calls Beigel his “friend, my brother, my family.”

“He died shielding his students from gunfire. He made the ultimate sacrifice to do what he so often effortlessly did; make the lives of other people better,” Hipps wrote. “I won’t say goodbye. It just hurts too much. I will see you on the other side.”

Martin Duque Anguiano’s death was confirmed on Instagram by his brother Miguel.

Miguel posted a photo with a caption that reads in part: “Words can not describe my pain. I know you’re in a better place.”

Senior Nicholas Dworet’s death was confirmed by his swim team on Facebook.

“It’s with a heavy heart that I/We have to announce that our family member, teammate, TS Aquatics swimmer Nick Dworet has passed away,” the post reads.

Dworet was planning to compete for the University of Indianapolis. Before his death, Facebook friends wrote: “We can’t wait to see what you can achieve.”

Aaron Feis, who was a football coach at the school, acted as a human shield to protect students from Cruz as he fired rounds into a room, according to CBS Miami.

Feis, who was also a security guard, was struck by gunfire and later died.

“It is with Great sadness that our Football Family has learned about the death of Aaron Feis,” the MS Douglas Football team tweeted Thursday. “He died a hero and he will forever be in our hearts and memories.”

Her Facebook page has since been turned into a memorial. Friends called her “charismatic and lovely.”

A photo from his U.S. Navy retirement ceremony was shared on social media. According to the post’s caption, Hixon is survived by his wife, Debbi, sons Thomas (Ines) and Corey and two grandchildren.

Luke Hoyer’s death was confirmed by his aunt, Toni Stroud Brownlee, on Facebook. According to Brownlee, authorities found Hoyer on the third floor of the school.

“This has devastated our family and we’re all in shock and disbelief,” she wrote. “Our hearts are broken. Luke was a beautiful human being and greatly loved.”

Bazinsky originally shared a photo of Loughran on Facebook in desperate search of help to find her. She later updated the post by writing in part: “Cara’s parents were given the news no parent ever wants to hear at 2am. Please keep her family in your prayers. This is too horrible to even begin to process.”

Gina Montalto’s death was confirmed by her mother, Jennifer, on Facebook. Support poured in through comments over the loss of her loved one.

Montalto volunteered as a friend for kids with special needs, and she was on the color guard squad. An instructor called her “the sweetest soul ever.”

Joaquin Oliver’s death was confirmed by a Venezuelan journalist who was with his family when they received the news. He had just become a U.S. citizen.

Oliver’s Instagram page has received an outpouring of support. Condolences were shared from friends and strangers as comments on his most recent photo.

Alaina Petty’s family confirmed in a statement that the 14-year-old was among those killed Wednesday.

“It is impossible to sum up all that Alaina was, and meant, to her family & friends. Alaina was a vibrant and determined young woman, loved by all who knew her,” the family said. “She brought peace and joy to those that had lost everything.”

Petty served in the high school’s JROTC program and volunteered with her church. She traveled to help victims of Hurricane Irma in Florida last year.

“While we will not have the opportunity to watch her grow up and become the amazing woman we know she would become, we are keeping an eternal perspective,” the family said.

Meadow, a senior, planned to attend Lynn University in Boca Raton, Florida. Her Facebook account has been converted into a memorial page.

Carmen Schentrup’s death was reported by family members and friends on social media. Her cousin, Matt Brandow, called her “the smartest and most intelligible 16-year-old I’ve ever met.”

According to the Broward County Public School system, Schentrup was a 2017 National Merit Scholar semifinalist.

Peter Wang, 15, Helena Ramsay, 17, and Alexander Schachter, 14, were the other three victims killed in the attack, authorities said during a news conference Thursday evening. Wang was shot while holding the door open so others could flee.