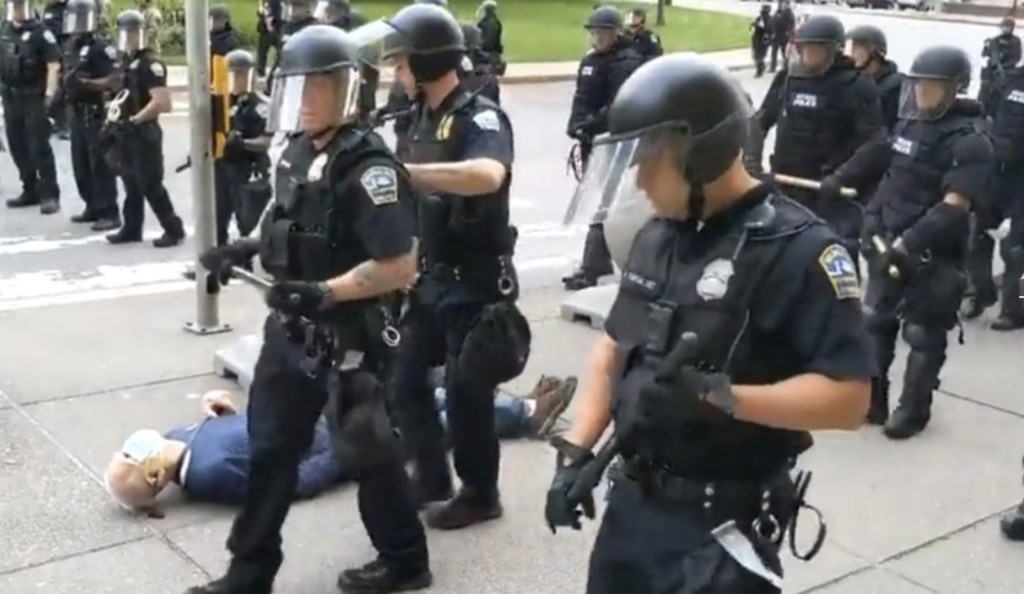 They Did This KNOWING Cameras Were Rolling

Two New York police officers have been suspended after a viral video showed them shoving a 75-year-old man to the ground on Thursday night.

The graphic video shared on Twitter shows a man walking up to Buffalo Police Department officers. It is unclear if he exchanged words with the officers before he is shoved to the sidewalk. The man stumbles back and falls and the video shows him motionless and bleeding from his head.

After the man falls, a person shouts, “He’s bleeding from his ears!” Someone else shouts, “Get a medic!” The reporter recording the video is then told to back up.

Buffalo Mayor Byron Brown issued a statement late Thursday, saying the man in the video is 75 years old and at the hospital in “serious but stable” condition.

“I was deeply disturbed by the video, as was Buffalo Police Commissioner Byron Lockwood,” Brown said in the statement, which was posted to Twitter. “He directed an immediate investigation into the matter, and the two officers have been suspended without pay.

“After days of peaceful protests and several meetings between myself, police leadership and members of the community, tonight’s event is disheartening.”

“Let’s hope he fully recovers,” Poloncarz added. Earlier, Poloncarz said the video “sickens” him and that “the officers must be held responsible for their actions, not just fired.”

“This incident is wholly unjustified and utterly disgraceful,” the governor said in a tweet.

He added, “Police Officers must enforce — NOT ABUSE — the law.”

The American Civil Liberties Union of New York (NYCLU) tweeted that the injured man was at a peaceful protest against police violence.

“The casual cruelty demonstrated by Buffalo police officers tonight is gut-wrenching and unacceptable,” NYCLU Buffalo Chapter John Curr said in a statement. “Police officers cannot continue to hide behind the lie that they are protecting and serving. City leaders need to take this as a wake-up call and seriously address the police violence during this week’s protest and the culture of impunity that led to this incident.”

The video was taken by WBFO reporter Mike Desmond, according to the outlet.

Police initially said in a statement that a person “was injured when he tripped & fell,” WIVB-TV reported.

The Buffalo Police Department later announced the officers’ suspension on its Facebook page, adding that an internal affairs investigation was already underway.

The Buffalo Police Department and the New York State Police did not immediately respond to USA TODAY’s requests for comment.

Since Floyd’s death, which has been ruled a homicide, protesters nationwide have decried police brutality and racial inequality. Protests have been marred by violence and looting, and police have been caught on camera multiple times using force against protesters — including peaceful ones.

“I hope to continue to build on the progress we have achieved as we work together to address racial injustice and inequity in the City of Buffalo,” Brown said. “My thoughts are with the victim tonight.”