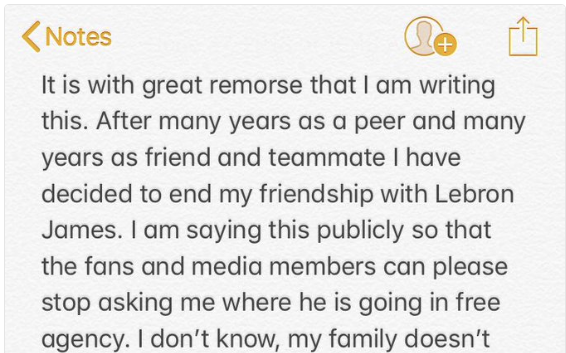 This Is How Ridiculous The LeBron Watch Has Gotten

Richard Jefferson has apparently had enough with the LeBron James questions.

The 17-year NBA veteran and friend of LeBron who played on the Cleveland Cavaliers’ 2016 NBA championship team unfriended James via Twitter on Wednesday “so that the fans and media members can please stop asking me where his going in free agency.”

Jefferson, like the rest of the NBA world, is clearly weary of the where-will-James-go obsession while simultaneously being fascinated by it. It’s an affliction that has plagued NBA players, executives, fans and media every time James has left his future in doubt heading into free agency.

James is a master at keeping his thoughts secret and the rest of the NBA hanging on his decisions. His friends don’t appear to be exceptions to that rule.

So just leave Jefferson alone, OK? Maybe one day he and James can be friends again.