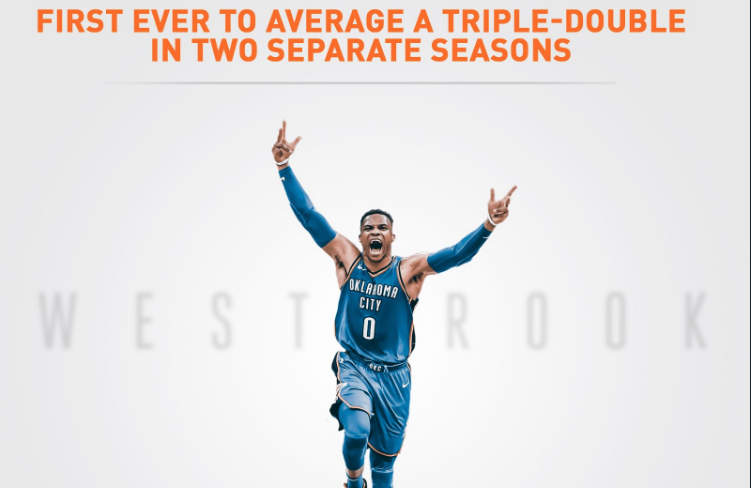 This Man is Not Human

Russell Westbrook joined Oscar Robertson last season as the only players to average a triple-double per game over the course of an entire season.

Now he is the only one to have done it twice.

The Oklahoma City superstar entered the final two games of the 2017-18 campaign needing 34 total rebounds to average 10 per contest and, in the process, complete the triple-double average. Westbrook snared 18 boards on Monday against Miami, and needed 16 in the season finale to clinch a triple-double average for the season.

He got that achievement by snaring rebound No. 16 with just over nine minutes left in the third quarter against the Memphis Grizzlies and a standing ovation ensued. He finished with just six points, but had a career-high 20 rebounds and 19 assists.

”I’m very, very thankful and blessed, man, to go out and compete,” Westbrook said after the game. ”Like I’ve said many, many times, I don’t take this game for granted. I don’t take going out on the floor and competing for granted.”

Westbrook had one of the most unusual first halves of his career to help the Thunder take a 20-point lead. He had 12 assists and 11 rebounds, yet only scored one point and took two shots.

Before last night’s game, there was some speculation that Westbrook was indeed pursuing the statistical milestone. Westbrook responded by defending his ability to amass the stats in the first place.