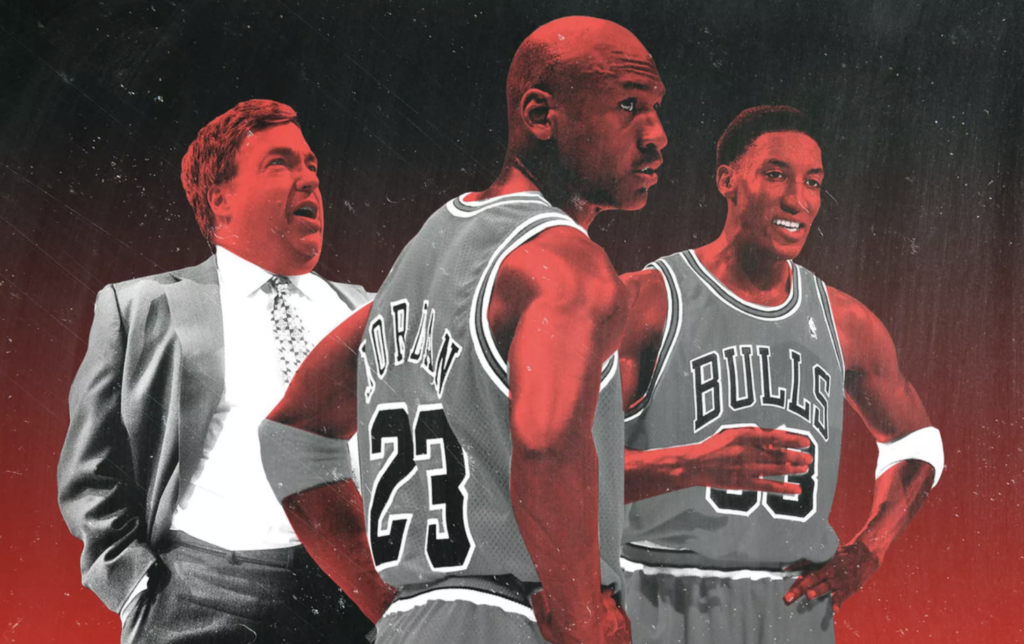 We All Knew The Bulls Blew It!

On Sunday, one of the most highly anticipated documentaries of all time premiered over two hours on ESPN. And wow, those two hours sure packed a punch.

Here are some of the biggest takeaways from Night 1…

The Last Dance didn’t pull any punches, and that included its treatment of the team’s general manager, Jerry Krause. Within the first 15 minutes of the first episode, the tension behind the 1997-98 season is largely laid at his feet.

From the quote about organizations winning championships, not players, to the conversation with Phil Jackson about it being his last season, it’s hard not to leave Episode 1 without wondering what might have been if it were Krause who was on the organizational chopping block.

The nerve it took for Krause, a former baseball scout, to tell a five-time champion NBA coach that 1997-98 would be his final campaign, even if they went 82-0, is tough to fathom.

Of course, there were other factors that led to the breakup of the Bulls following the sixth title, but more stability in the front office couldn’t have hurt.

As pointed out by the New York Times‘ Marc Stein, it was clear much of the ire from the roster was directed at Krause.

And that, of course, wasn’t the only time spent on Krause. Peppered throughout the first two episodes are verbal barbs from Jordan to Krause, poking fun at his height and weight.

Prior to the introduction of the team for its first game of the 1997-98 campaign, the home fans are heard booing Krause when he’s introduced.

There’s no question that this figures to be a running theme through the series.

“He deserves a lot of credit [for building the team],” Steve Kerr said. “But he couldn’t get out of his own way.”

Following a good laugh at the above headline that the production crew relayed to him, Jordan told an eye-opening story from his rookie season.

After looking for his teammates for a bit, he entered a hotel room he said was loaded with illicit drugs, including cocaine, women and what sounded like most of the roster.

Explaining that he immediately left the room fearing a potential raid by law enforcement, Jordan said, “I was pretty much on my own after that.”

For a rookie to display that level of maturity, leadership and focus in the face of peer pressure was foreshadowing of the intangibles that made Jordan the winner he was.

To tell a coach going for his sixth championship in eight seasons, all with your organization, that this would be his final campaign before it even started defies explanation.

But, as Stein explained, that tension between Krause and the team seemed to become fuel for the championship run.

In the team’s first formal meeting before the 1997-98 season, Jackson introduced the theme for the journey they were about to undertake.

On the laminated cover pages of the booklets Jackson distributed to the players were Roman numerals one through six, as well as “The Last Dance?”

One of the Game’s Most Underrated Superstars

“I considered him my best teammate of all time,” Jordan said of Scottie Pippen. It’s hard to imagine anyone else who’d even compete for that title.

Pippen was a revolutionary point forward who averaged 20.0 points, 7.3 rebounds, 6.0 assists, 2.2 steals and 0.9 blocks over the course of the years in which Chicago won its six titles. But those numbers that would leap off the page for most players fell shy of Jordan’s. And as a superstar who spent much of his career as a No. 2, he probably doesn’t get the credit he deserves.

This documentary’s focus on his versatility, ability and upbringing at the start of the second episode was refreshing.

The stories he told about witnessing his father’s stroke and then later his brother’s paralysis at the hands of a classmate in gym class were particularly moving.

The understated, persistent excellence he brought throughout his career was refined by those experiences. Had he wound up on another team, those traits may have earned him more recognition in conversations about the greatest players of all time, but his perfect fit alongside MJ led to six titles in eight years.

“He was maybe the No. 2 player in the NBA,” Jackson said as the documentary veered into the long-term deal Pippen signed in 1991. “His value was immense.”

In the span of those aforementioned eight seasons, Pippen trailed only Jordan, David Robinson, John Stockton, Karl Malone and Charles Barkley in box plus/minus. But, as the documentary pointed out, he was 122nd in the league in annual salary for the 1997-98 campaign. The deal he signed in ’91 was for $17.5 million and lasted through ’98. And Bulls owner Jerry Reinsdorf refused to renegotiate.

In a way, this was sort of like the Golden State Warriors’ situation when they had Stephen Curry on a below-market contract (due to his ankle issues) that allowed them to later add Kevin Durant.

When you have a top-five or -10 player like Pippen barely making starter-level money, it makes building a championship roster much easier.

The documentary also spent time on Jordan’s childhood in Wilmington, North Carolina. His parents worked hard, and they wanted to instill their work ethic in their children.

“If you weren’t doing the best you could, he pushed you harder,” Jordan’s brother Ronnie said of the family patriarch, James Jordan.

Jordan’s parents thought sports would be the right kind of push, so they gave them as much time as they could on the field or in the gym.

There, he had battles with his brother Larry, who may have been every bit as competitive, that helped develop the player he eventually became.

“I wouldn’t be here without my brother Larry,” Jordan said.

Following the broken foot that sidelined him for the majority of his sophomore NBA season, Jordan oversaw his own rehab process back in Chapel Hill, North Carolina.

When he returned at the end of the season, he was on a seven-minute-per-half playing time restriction. And he did not like it.

The last game of the season, Krause insisted that Jordan sit out the final possession, since he’d hit his minutes limit.

Fortunately, John Paxson hit a game-winner that sent Chicago to the postseason. But the documentary suggested that may have been the moment distrust between MJ and the front office began.

It’s a good thing the Bulls made the playoffs, because Jordan gave us one of the greatest performances in league history in that first round.

Over three games, he averaged 43.7 points, 6.3 rebounds, 5.7 assists, 2.3 steals and 1.3 blocks. In Game 2 alone, he dropped 63 and willed the Bulls to overtime against the powerhouse Boston Celtics.

The Celtics went on to win the series, but that was undoubtedly a moment that put the world on notice. Jordan was primed to be one of the most dynamic athletes we’d ever seen.

Episode 2 ends with a cliffhanger.

“Pippen started berating Jerry Krause in front of the team,” Jackson said. And shortly thereafter, Pippen, who was the subject of trade rumors that summer, said he would not play another game for the team.

Pippen demanded a trade, which Jordan thought was “selfish.” Of course, that didn’t come to fruition. But we’ll have to wait till next week to get more details why.