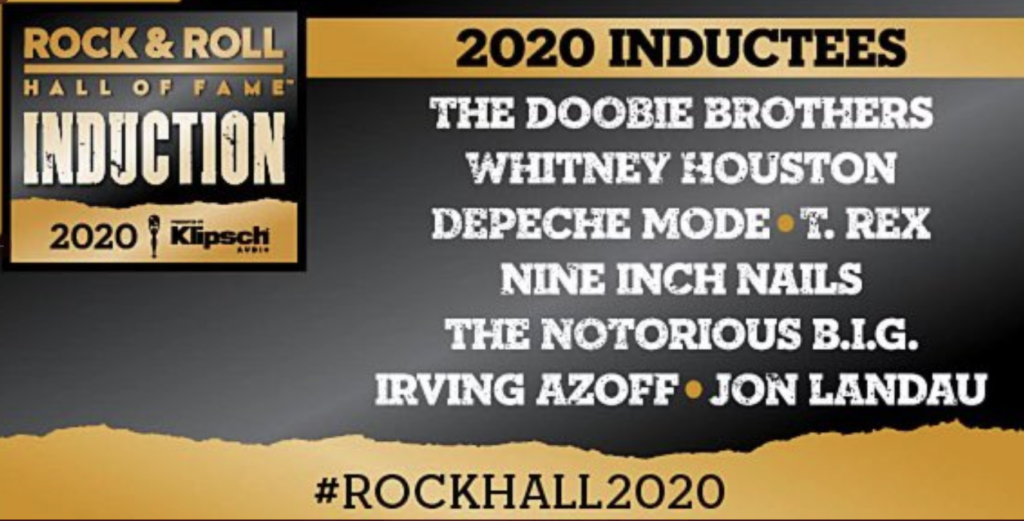 Welcome To the Rock Hall of Fame

The Rock and Roll Hall of Fame has officially announced this year’s inductees: Nine Inch Nails, the Notorious B.I.G., Whitney Houston, Depeche Mode, the Doobie Brothers, and T. Rex will all join the class of 2020. Additionally, Jon Landau and Irving Azoff, two of the most successful managers in rock history, will be presented with the Ahmet Ertegun Award.

The induction ceremony will be held at Cleveland’s Public Hall on May 2nd and will air live on HBO and the SiriusXM Rock and Roll Hall of Fame radio station. Tickets go on sale on February 27th.

The six acts that did make it in represent a musically diverse class encompassing everything from Nineties industrial, R&B, and hip-hop to Seventies glam and soft rock. “Each of those bands has helped shape the form that rock & roll has taken over the years,” Michael McDonald, who is being inducted for his work in the Doobie Brothers, tells Rolling Stone. “That’s what I like to see the Rock and Roll Hall of Fame do: pick those bands that have sculpted what we see rock & roll as today.”

The Notorious B.I.G., Whitney Houston, departed Doobies drummers Michael Hossack and Keith Knudsen, and every T. Rex member besides drummer Bill Legend will be inducted posthumously. If tradition holds, Houston, Biggie, and T. Rex will be honored with tribute performances.

Nine Inch Nails are entering the Hall after appearing on the ballot three different times. “I’m pretty freaked out,” says Trent Reznor. “I’m quite in shock. When I look back at how Nine Inch Nails are received, it always seems like we fall between the cracks. I don’t know if it’s a defense mechanism, but I just assumed we’d stay in that category, so I’m pleasantly surprised to see us acknowledged. It feels pretty good … I’m allowing myself, for a limited period of time, to feel good about this.”

Depeche Mode are equally happy. “We’re incredibly honoured to be included as one of this year’s Rock and Roll Hall of Fame inductees, and to stand alongside the other incredible acts in the Rock Hall and those joining this year,” they said in a group statement. “A huge thank you to everyone who has supported us and our music over the years, who have made this possible.”

There are fewer opportunities for band reunions than at previous ceremonies, but it will be a chance for the Doobie Brothers to reunite with former bassist Tiran Porter, former guitarist Jeff “Skunk” Baxter, and former drummer John Hartman. “I certainly hope that all those guys will show up and be part of the proceeding,” says Doobies singer/guitarist Patrick Simmons. “They definitely deserve the recognition.” Last November, the band reunited with former frontman Michael McDonald to announce a 2020 North American tour celebrating the band’s 50th anniversary.

It’s also a chance for Depeche Mode to reunite with original keyboardist Vince Clarke and his replacement, Alan Wilder, who left the group in 1995. Wilder returned for a guest appearance in 2010, but Clarke hasn’t played with the group since 1981. (He went on to form Erasure and Yazoo.)

Many Hall of Fame induction ceremonies end with every performer of the night jamming together, but figuring out a way to do that this year might be a challenge. “We’ll come up with something, I’m sure!” says Simmons. “We’ll play the blues!”

The Hall of Fame has a long history of favoring guitar-based bands over ones that utilize synthesizers, but the presence of Depeche Mode and Nine Inch Nails in this class seems to suggest that things are changing. “Rock doesn’t have to be guitar-bass/drums,” says Reznor. “It can be a turntable, a computer, a synthesizer, sequencer. They are all tools and a spirit of expression.”