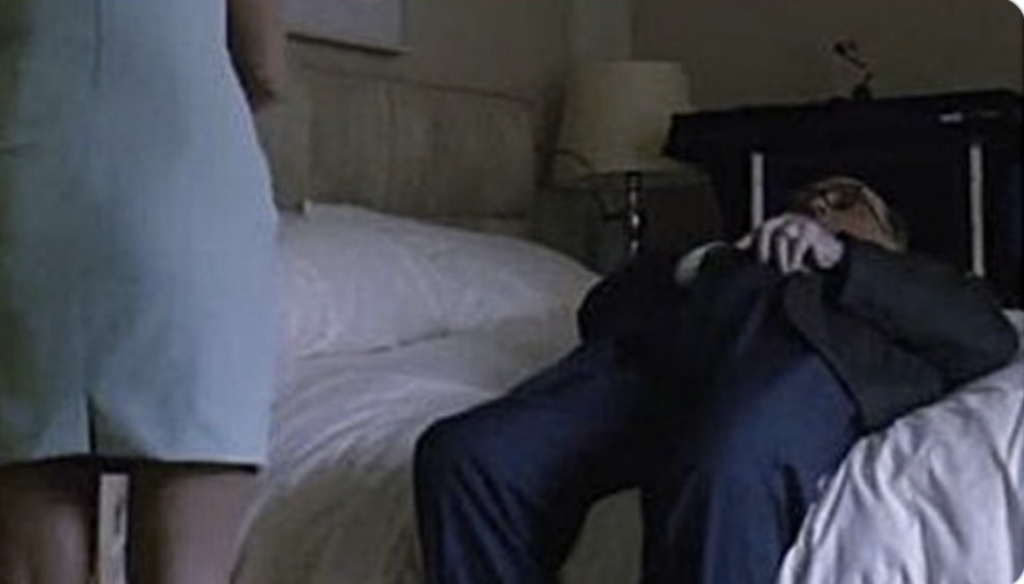 The reputation of Rudy Giuliani could be set for a further blow with the release of highly embarrassing footage in Sacha Baron Cohen’s follow-up to Borat.

In the film, released on Friday, the former New York mayor and current personal attorney to Donald Trump is seen reaching into his trousers and apparently touching his genitals while reclining on a bed in the presence of the actor playing Borat’s daughter, who is posing as a TV journalist.

Following an obsequious interview for a fake conservative news programme, the pair retreat at her suggestion for a drink to the bedroom of a hotel suite, which is rigged with concealed cameras.

After she removes his microphone, Giuliani, 76, can be seen lying back on the bed, fiddling with his untucked shirt and reaching into his trousers. They are then interrupted by Borat who runs in and says: “She’s 15. She’s too old for you.”

Representatives for Giuliani have not replied to the Guardian’s requests for comment.

Word of the incident first emerged on 7 July, when Giuliani called New York police to report the intrusion of an unusually dressed man.

“This guy comes running in, wearing a crazy, what I would say was a pink transgender outfit,” Giuliani told the New York Post. “It was a pink bikini, with lace, underneath a translucent mesh top, it looked absurd. He had the beard, bare legs, and wasn’t what I would call distractingly attractive.

“This person comes in yelling and screaming, and I thought this must be a scam or a shakedown, so I reported it to the police. He then ran away,” Giuliani said. The police found no crime had been committed.

Giuliani continued: “I only later realised it must have been Sacha Baron Cohen. I thought about all the people he previously fooled and I felt good about myself because he didn’t get me.”

Viewers may be less convinced that Baron Cohen, reprising his role as the bumbling reporter Borat Sagdiyev, and Maria Bakalova, who plays his daughter, Tutar, had no success.

In the film Borat is dispatched by the Kazakh government back to the US to present a bribe to an ally of Donald Trump in order to ingratiate his country with the administration. After the monkey earmarked for the gift is indisposed, Borat’s supposedly underage offspring becomes the replacement present.

Even before he reaches into his trousers, Giuliani does not appear to acquit himself especially impressively during the encounter. Flattered and flirtatious, he drinks scotch, coughs, fails to socially distance and claims Trump’s speedy actions in the spring saved a million Americans from dying of Covid. He also agrees – in theory at least – to eat a bat with his interviewer.

Giuliani has become a key figure in the late stages of the US presidential election after obtaining a laptop hard drive purportedly belonging to Hunter Biden and left at a repair shop in Delaware.

His efforts to unearth political dirt on Trump’s rival for the White House mean that the film’s mortifying footage can be seen as an attempt to undermine Giuliani’s credibility. The film, released on Amazon Prime less than a fortnight before the election, ends with an instruction for viewers to vote.

Although unfortunate, the circumstances of the set-up appear consensual, with Giuliani led to believe he was being courted. Bakalova, 24, is highly plausible in the sting, despite also having to pretend, for the benefit of viewers, to be a feral child posing as a far-right journalist.

In a radio interview after news of the scene broke, Giuliani claimed that he was only trying to take off his microphone and tucking in his shirt.

“I had to take off the electronic equipment,” Giuliani told WABC. “And when the electronic equipment came off, some of it was in the back and my shirt came a little out, although my clothes were entirely on. I leaned back, and I tucked my shirt in, and at that point, at that point, they have this picture they take which looks doctored, but in any event, I’m tucking my shirt in. I assure you that’s all I was doing.”

He added that he had believed the interview with Bakalova was entirely legitimate. “At one point she explained to me some problems she had. I actually prayed with her,” he said. “And then I had to leave. I had my jacket on. I was fully clothed at all times.”

Later on Twitter, Giuliani derided the film as “a complete fabrication”.

“At no time before, during, or after the interview was I ever inappropriate. If Sacha Baron Cohen implies otherwise he is a stone-cold liar,” he added.

As with the first film, which made $262m on release in 2006 and won a Golden Globe for Baron Cohen, the most troubling scenes are those which reveal deep-seated prejudice among the American people.

Baron Cohen’s real-life broadsides against platforms he feels enable antisemitism are echoed in the film, in which Borat learns through Facebook that the Holocaust “was nothing but a fairytale”.

He is corrected following a conversation with two elderly Jewish women, one of whom, Judith Dim Evans, died after filming, aged 88. Last week her estate filed a suit against the film-makers, claiming that she was “horrified and upset” upon learning “the movie was actually a comedy intended to mock the Holocaust and Jewish culture”.

However, Deadline suggests the film-makers did apprise Dim Evans of the film’s true targets after her scenes were shot, and that there is footage of this. They are also said to be hopeful her family may reconsider once they have seen the film, which ends with a dedication to Dim Evans and the link to a website set up in her honour.