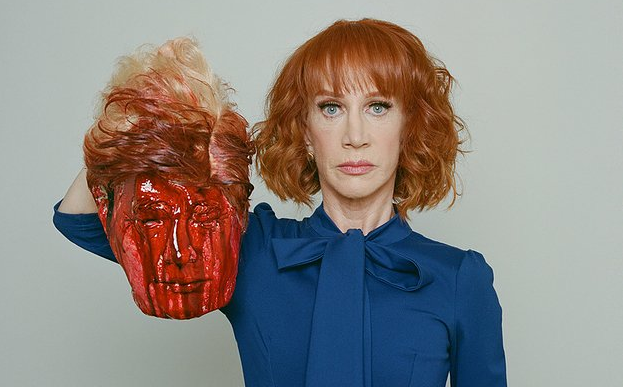 When Doing if For the Gram Goes Wrong

CNN’s decision comes one day after photos were released of Griffin that showed the comedian holding up a bloody head resembling that of President Donald Trump.

“CNN has terminated our agreement with Kathy Griffin to appear on our New Year’s Eve program,” the network said in a statement.

Griffin has apologized for the photos, taken by provocative celebrity photographer Tyler Shields.

“I beg for your forgiveness. I went too far,” she said in a video posted to Instagram late Tuesday. “I made a mistake and I was wrong.”

Admitting the images were “too disturbing,” Griffin said she asked Shields to take down the photo.

Kathy Griffin says she went way too far when she appeared in a brief video Tuesday holding what looked like President Donald Trump’s bloody, severed head.

The comic apologized later for the video image, saying it was “too disturbing” and wasn’t funny.

“I sincerely apologize,” she said in a second video. “I went way too far. The image is too disturbing. I understand how it offends people.”

The first video showed a straight-faced Griffin slowly lifting the bloody head. She originally described the project with photographer Tyler Shields as an “artsy fartsy statement” mocking the commander in chief.

Many online called for Griffin to be jailed.

In her apology video, Griffin begs her fans for forgiveness and says she has asked the photographer to remove the images.

The video had apparently been removed from Shields’ blog by late Tuesday.

“We are pleased to see she has apologized,” CNN said in a statement. “We are evaluating New Year’s Eve and have made no decisions at this point.”

Squatty Potty, a Utah-based bathroom products company, said in a statement Tuesday that it has suspended an ad campaign featuring Griffin.

A publicist for Shields did not respond to a request for comment.