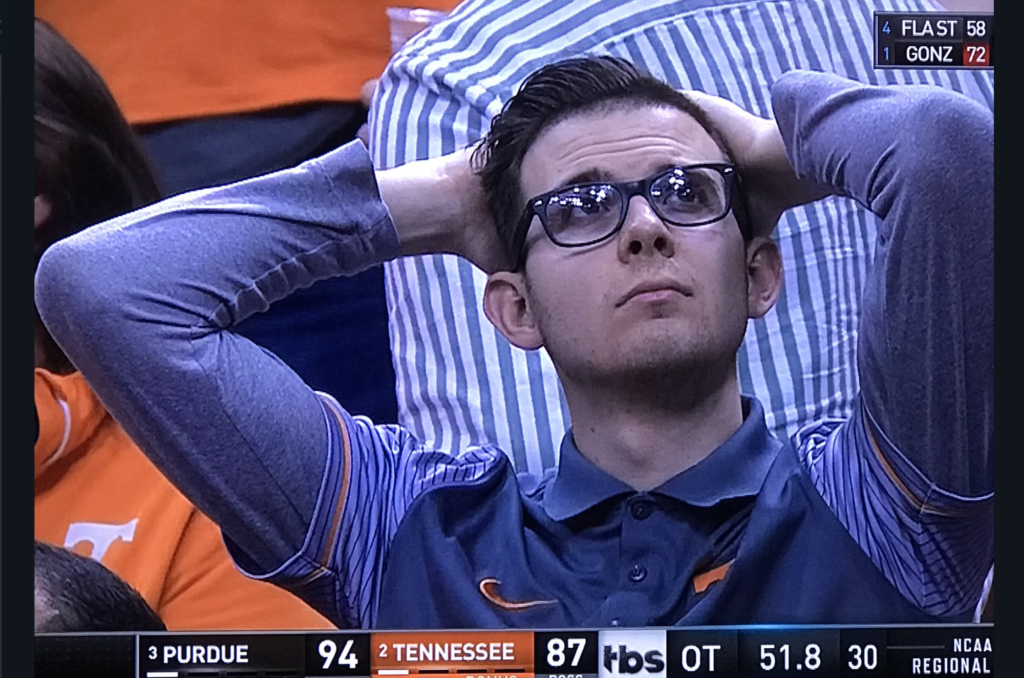 Why Do We Even Fill Out Brackets?

Down two to Tennessee with 2.7 seconds left, Purdue narrowly avoided a 5-second call before Carsen Edwards took a pass in the corner and heaved up a 3-point attempt that bounced off the rim.

But a whistle gave Edwards and the Boilermakers a reprieve.

Lamonte’ Turner bumped into Edwards after he released the shot and the Big Ten’s leading scorer went to the line for three free throws with 1.7 seconds left. Edwards missed the first, steadied himself, and knock down the next two to force overtime. Given a second chance to put away the Volunteers, the Boilermakers got it done.

Edwards finished with 29 points as Purdue advanced to the Elite Eight of the NCAA Tournament for the first time since 2000, beating Tennessee 99-94 on Thursday night after blowing an 18-point lead.

“When I got to the free throw line, I was struggling all game,” said Edwards, an 85.2 percent shooter who went 8 of 14 at the line in the game. “Being able to hit the last two was just a blessing. Just an opportunity, stepped up to get us some more time to play.”

Turner said Edwards had been kicking out his leg all night, something he had been pointing out to the referee.

“I try to contest the shot, and his leg made contact with me and they called a foul,” Turner said. “So I don’t understand what I’m supposed to do.”

The third-seeded Boilermakers (26-9) will play top-seeded Virginia, a 53-49 winner over Oregon, on Saturday night in the South Regional final for their first trip to the Final Four since 1980.

Purdue is in a regional final for the fifth time, but first with coach Matt Painter, who had gotten the team to the round of 16 four times previously.

“I’m happy for myself, happy for my guys and happy for Coach Paint,” said Ryan Cline, who had a career-high 27 points shooting 7 for 10 from 3-point range before fouling out in OT.

Grant Williams’ dunk with 8.8 seconds left made it 82-80 and had second-seeded Tennessee (31-6) on the verge of its second Elite Eight berth all-time. Williams also blocked Edwards’ layup attempt in the closing seconds out of bounds. Officials reviewed the play to see if it went off Edwards’ ankle, but only adjusted the clock, giving Purdue one more chance.

It was Tennessee’s second straight overtime game in this tournament. The Vols blew a 25-point lead to Iowa in the second round, but recovered to win it in OT. The last team to play consecutive overtime games in the NCAA Tournament was Florida in 2011. The Gators beat BYU and lost to Butler.

“We had the lead with one-point something seconds left,” Tennessee coach Rick Barnes said. “Tough foul.”

Purdue scored nine of the first 11 points in OT.

“I think we had that relief,” Painter said. “Our guys did such a good job of competing in overtime. You know how it goes. Like the ball bounced our way a couple times. I thought in regulation there were a couple bounces we didn’t get. But it did in overtime.”

This was the third straight Sweet 16 berth for the Boilermakers, and their experience at this point showed compared to a Tennessee team with nobody around from the Vols’ last trip to a regional semifinal back in 2014. The Boilermakers led 40-28 at halftime, handing Tennessee only its fourth double-digit deficit this season.