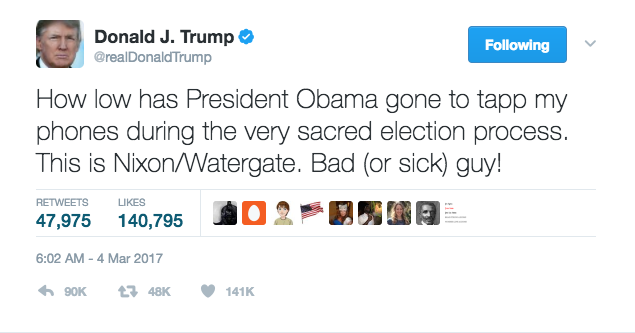 Congressional Republicans were flummoxed Sunday by President Donald Trump and his White House’s continued assertions – provided without evidence – that President Barack Obama had wiretapped Trump Tower during the 2016 presidential campaign.

A day after Trump made the charge, Hill Republicans were largely mute, and those who spoke out were perplexed at the source of Trump’s information, which the White House has yet to disclose.

Sen. Marco Rubio said Sunday he had seen “no evidence” to back up Trump’s wiretap claims. Rubio is a member of the Senate Intelligence Committee that’s investigating Trump’s ties to Russia and has received classified briefings on the issue.

“I’d imagine the president and the White House in the days to come will outline further what was behind that accusation,” the Florida Republican said on NBC’s “Meet the Press.” “The president put that out there, and now the White House will have to answer as to exactly what he was referring to.”

Even some of Trump’s strongest supporters were dubious.

On “Fox News Sunday,” Sen. Tom Cotton (R-Ark.) said he had no evidence that what Trump said was true: “It doesn’t mean that none of these things have happened, just means I haven’t seen them yet.”

Meanwhile. Congressional Democrats said Trump’s flailing at his predecessor is a sign that he’s feeling squeezed by the federal investigation into his associates’ ties to Russia. Senate Minority Leader Chuck Schumer (D-N.Y.) said Trump’s charge, if proven false, is proof he “doesn’t know how to conduct himself.” And if it’s true, “it’s even worse,” because it means federal authorities saw a legal basis to authorize a wiretap, which requires a judge’s signoff.

“Either way … the President’s in trouble,” said Schumer said on NBC’s “Meet the Press.”

House Democratic leader Nancy Pelosi (D-Calif.) said on CNN’s “State of the Union” that Trump’s allegation about Obama was a classic diversion tactic.

“This is called a wrap-up smear,” she said. “You make up something, then you have the press write about it, then you say everybody is writing about this charge. It’s the tool of an authoritarian, to just have you always be talking about what you want them to be talking about it.”

Trump aides were caught Sunday defending the president’s accusation without any evidence to back them up. And they sought to shift the focus to Congress, by calling on the House and Senate intelligence committees — already probing potential Trump ties to Russia — to include an investigation of any illegal wiretapping by the Obama administration.

“I think what is necessary is Congress doing its job. Let them investigate,” said deputy White House press secretary Sarah Huckabee Sanders in an interview on ABC’s “This Week.”

Sanders presented no evidence of any improper actions by the Obama administration, and she repeatedly repeat Trump’s explosive Saturday tweets accusing Obama of spying on him and his team. Pressed repeatedly by host Martha Raddatz, Sanders said Trump was merely wondering about illegal wiretapping — despite Trump declaring it as fact just a day earlier.

“I think he is going off of information that he’s seeing that has led him to believe this is a very real potential,” she said, adding, “He’s talking about: ‘Could this have happened?’”

Trump on Saturday said that Obama had tapped Trump Tower phones, despite no evidence of his predecessor’s involvement. His claim appeared to be based on right-wing media reports raising questions about whether Trump associates had been surveilled. On Sunday, the press secretary stated: “President Donald J. Trump is requesting that as part of their investigation into Russian activity, the congressional intelligence committees exercise their oversight authority to determine whether executive branch investigative powers were abused in 2016.”

“The president of the United States does not have the authority to unilaterally order the
wiretapping of an American citizen,” he said, noting that such taps are only approved by judges based on evidence in a criminal or counterintelligence investigation.

Earnest said the White House kept FBI investigations at arm’s length and didn’t against to “influence or dictate” how those probes were conducted.

The Trump administration’s call for Congress to investigate wiretaps targeting Trump or his associates comes as the House and Senate intelligence committees have already launched probes into whether top Trump allies had contacts with Russia officials during the 2016 campaign. House intelligence committee chairman Rep. Devin Nunes (R-Calif.) has also emphasized that he intends to probe leaks of classified information that have made their way into media reports since the election.