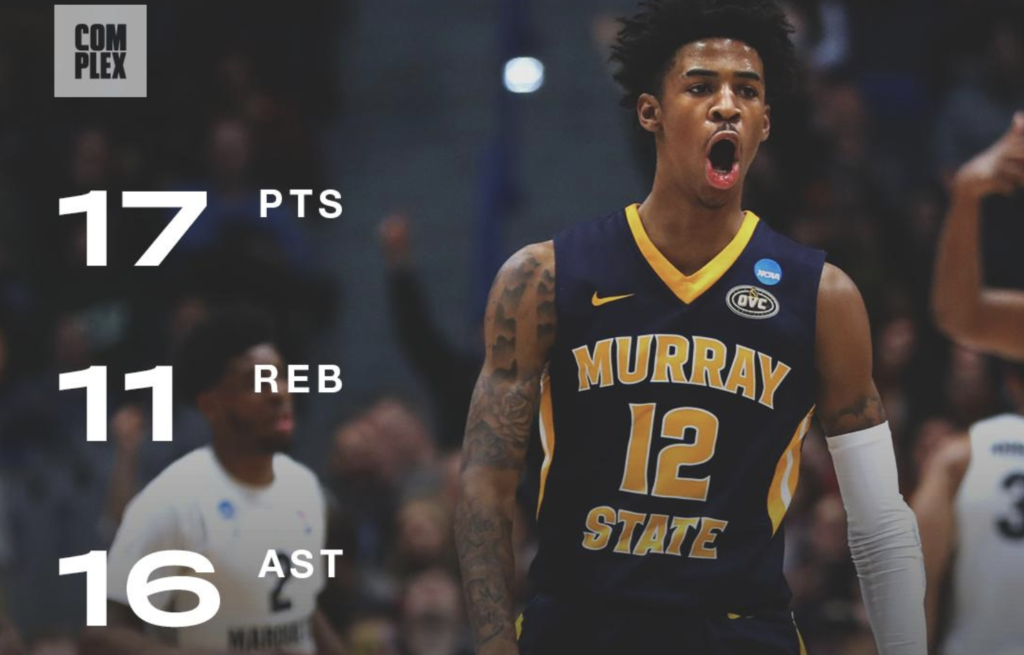 You Better Find Out Who Ja Morant is!

The game was in hand for Murray State and sensational point guard Ja Morant, who dominated Marquette in every way. With a chance to make some NCAA Tournament history, Morant’s coach told him to hit the boards and grab the rebound that would push him to an elusive triple-double.

Morant went up for a missed shot, snatched the ball away from an eager teammate, and that was it. Murray State fans began chanting “Tri-ple dou-ble!” to celebrate an upset in the first round of the West Region.

The triple-double was the ninth in the tournament since the NCAA started tracking them in 1987 and first since 2012. Murray State (28-4) continued a trend of 12 seeds beating 5s in March. It has happened every year but three since 2001, but this looked nothing like an upset. The Racers have won 12 consecutive games, including the Ohio Valley Conference tournament.

Murray State was never threatened in the second half by Marquette of the Big East. Morant and the Racers face fourth-seeded Florida State on Saturday, trying to take down an Atlantic Coast Conference foe next.

Murray State can always count on having the best player on the floor no matter who it plays, save for perhaps Duke’s Zion Williamson. The Blue Devils and Racers can’t meet in this year’s tournament until the Final Four.

“They’d be good without him, but with him, they’re pretty unique,” Marquette coach Steve Wojciechowski said.

With 4:36 left in the second half and Murray State up 20, Morant grabbed his 10th rebound, pulling it away from Racers big man KJ Williams.

“I was going for it. I called it and he still tried to get the rebound. I just snatched it and said, ‘It’s my ball,'” Morant said with a smile. “Normally, before the game I tell him that every ball that goes toward the rim needs to be his. Just attack the glass. Sorry, I had to take that one from him.”

The last player to record a triple-double in the NCAA Tournament was Draymond Green for Michigan State in 2012 against LIU-Brooklyn.

The lanky 6-foot-2 Morant has rocketed to stardom this season, and into a sure-fire NBA lottery pick — maybe second to Williamson. He exceeded the hype Thursday with a performance that was the talk of the tournament’s first full day.

The game was billed as a showcase of two of the nation’s best point guards, and Morant and Marquette’s Markus Howard delivered plenty of highlights. Howard scored 16 in the first half on a mix of 3s off screens and hard drives to the hoop.

Marquette (24-10) promised to make Morant see walls of defenders. The Golden Eagles collapsed on Morant every time he went to the basket and often double-teamed on the perimeter instead of switching on screens. Time and again, Morant found an open shooter while surrounded by defenders. He had eight assists in the first half, five that led to 3-pointers for the Racers, who led 42-35 at the break.

“Sometimes he surprises me when he gets to the goal and gets everybody to jump and he still finds a way to get the ball to us,” said Tevin Brown, who scored 19 points.

Howard finished with 26 points and Sam Hauser added 16 for the Golden Eagles.

As Murray State pulled away early in the second half, Morant had a two-handed slam off a nifty bounce pass from Darnell Cowart . Moments later, Morant fired a cross-court, no-look pass to Shaq Buchanan for a corner 3 that made it 57-40. Morant paused to glance toward the Murray State section and made finger goggles around his eyes. The sophomore seems to see it all on the court.

Morant said he’d rather be a playmaker than a finisher. His 16 assists matched the second-most in a tournament game.