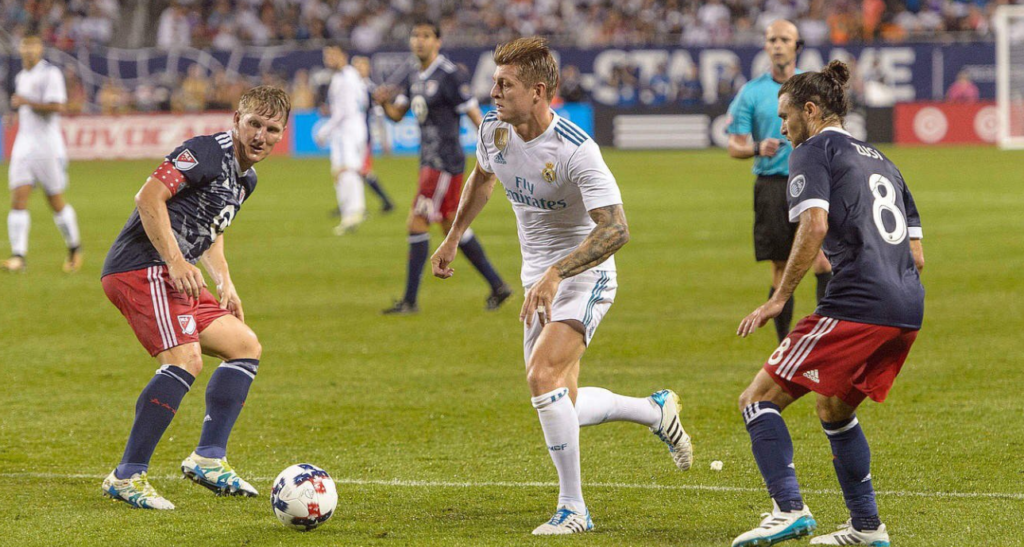 Dom Dwyer provided some late dramatics, but Real Madrid kept the cooler heads in penalty kicks to come out victorious in the 2017 MLS All-Star Game presented by Target.

The defending La Liga and Champions League title-holders prevailed at a sold out Soldier Field, thanks to a 4-2 shootout win following a 1-1 draw in regulation. Los Blancos made all four of their penalty kicks, with Marcelo netting the decisive tally, while Dwyer saw his opening attempt saved and Giovani dos Santos smashed his kick off the crossbar.

Madrid came within minutes of winning in regulation thanks to All-Star MVP Borja Mayoral’s 59th minute goal, but Dwyer found himself in the right place at the right time in the 87th minute to put in the rebound after Dax McCarty hit the post with a free header from a corner kick.

The Spanish visitors dominated the ball throughout a scoreless first half of the encounter and had 19 shots to show for it through 45 minutes. Though only two of those efforts tested All-Star starting ‘keeper Tim Howard, a number of other attempts – largely orchestrated by Madrid midfielder Isco – whistled just wide of Howard’s goalposts.

The All-Stars were not without looks of their own, though. After some probing counterattacks early in the game, their best chance of the half came in the 36th minute as Kaká beat his defender on the left side before finding David Villa free at the near post, but his turn and shot was expertly denied by an onrushing Keylor Navas.

After another spell of Madrid possession, Sebastian Giovinco put an ambitious effort from 35 yards just inches wide of Navas’ goal to close out the first period.

After making two first-half substitutions – one forced by a shoulder injury to Greg Garza – All-Star head coach Veljko Paunovic made 10 substitutions at halftime, leaving only first-half sub Ignacio Piatti on the field, while Real Madrid manager Zinedine Zidane made his first three changes of the game. A host of changes just past the hour mark then saw Zidane bring on some of the biggest names at his disposal, including Karim Benzema, Marcelo, Gareth Bale and Casemiro.

The new faces would prove influential, as Bale glanced a shot off the far post from a tight angle soon after coming on, while Marcelo would prove instrumental on the other end. The Brazilian international came across at the last minute to block away Diego Valeri’s seemingly open look at goal in the 71st minute, one of the All-Stars’ best chances of the half along with a Nemanja Nikolic effort that went wide a minute prior.

Despite the looks, Real Madrid continued to boss most of the possession in the second half, but were largely unable to find the crucial final ball outside of Mayoral’s goal and Bale’s effort off the woodwork, giving the All-Stars the chance to equalize and make Real sweat it out in penalties.