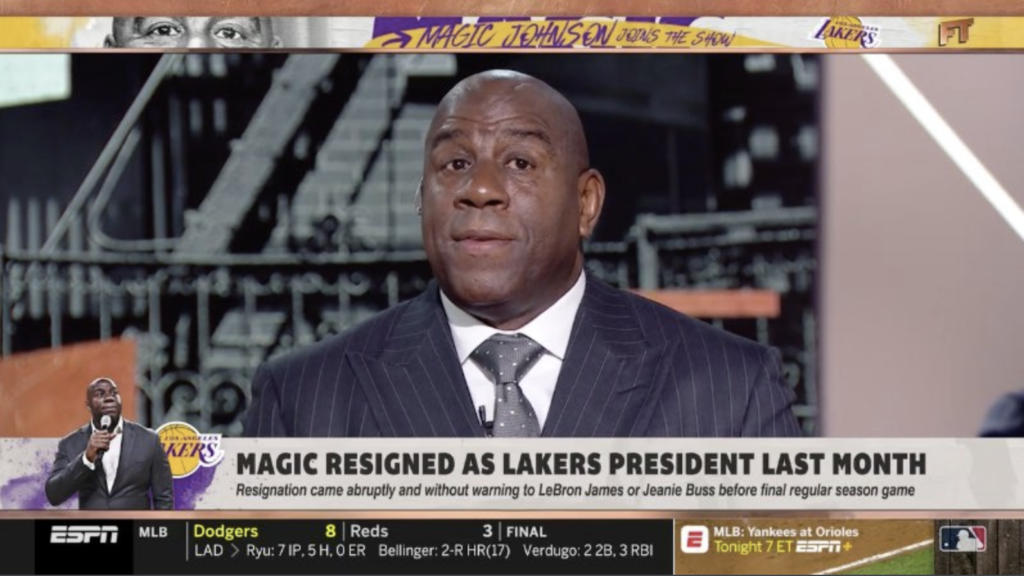 "If you're going to talk betrayal, it's only with Rob [Pelinka]."

—@magicjohnson on the Lakers pic.twitter.com/K0sSLK2rhB

To No Ones Surprise, The Lakers Are A Soap Opera

Johnson on Monday doubled-down on what he told reporters during the Lakers’ season finale which was that he was unhappy in his role as team president. He said on “First Take” that Pelinka was one of the reasons why.

“I started hearing, ‘Magic, you’re not working hard enough.’ ‘Magic’s not in the office,'” Johnson said. “So people around the Lakers office was telling me Rob was saying things, and I didn’t like those things being said behind my back.”

When Johnson resigned in April, ESPN’s Adrian Wojnarowski reported that Johnson was seen as not putting in enough hours to be president of basketball operations.

Johnson said on Monday that he told Lakers owner Jeannie Buss before taking the job that he would continue running his other businesses, and thus, would have limited hours at times.

When Johnson resigned in April, he told reporters that he grew tired of the “backstabbing” that came with the position. On Monday, he confirmed that it was Pelinka.

“Just Rob. Other people didn’t bother me,” Johnson said. He added: “What happened was, I wasn’t having fun coming to work any more, especially when I gotta work beside you, knowing you want my position.”

Johnson said he was only planning on working as team president for three years and wanted to prepare Pelinka to take his job when he left. He said as the rumors about his work ethic began to circle back to him, he had second thoughts.

“When I took the job, you know how many agents called me and said, ‘You gotta watch out for him.’ I said, ‘Eh, I gotta give the guy a fair chance. I can’t listen to people,'” Johnson said.

“He was a hard worker, smart guy, but now you have that position, so I’m good with that.”

Johnson also criticized the Lakers power structure, saying there were too many voices of influence around Buss.

Johnson used the decision to fire former head coach Luke Walton as an example. Johnson said he wanted to fire Walton and made it known. He said he had three meetings with Buss to discuss it, and after the second meeting they decided to fire Walton. However, during the third meeting, Johnson said Buss told him they should find a way to work it out with Walton and repair the situation.

“When we went back and forth like that, and then she brought [Lakers COO Tim Harris] into the meeting, some other guys, and Tim wanted to keep him … I looked up and I said, wait a minute, I only really answer to Jeannie Buss. Now I got Tim involved. And I said, ‘It’s time for me to go.'”

Johnson described the set-up as having “too many people at the table.”

“I didn’t like that Tim Harris was too involved in basketball. He’s supposed to run the Lakers business. But he was trying to come over to our side,” Johnson said.

“Jeannie’s gotta stop that. You gotta stop having those voices. It’s too many people at the table. What happens is, everybody gets to share their opinion, and it’s so much information coming at [Buss] that when I say, ‘Hey we have to do this,’ she can’t make a decision because they’re saying, ‘No, don’t go the way Magic is going.'”