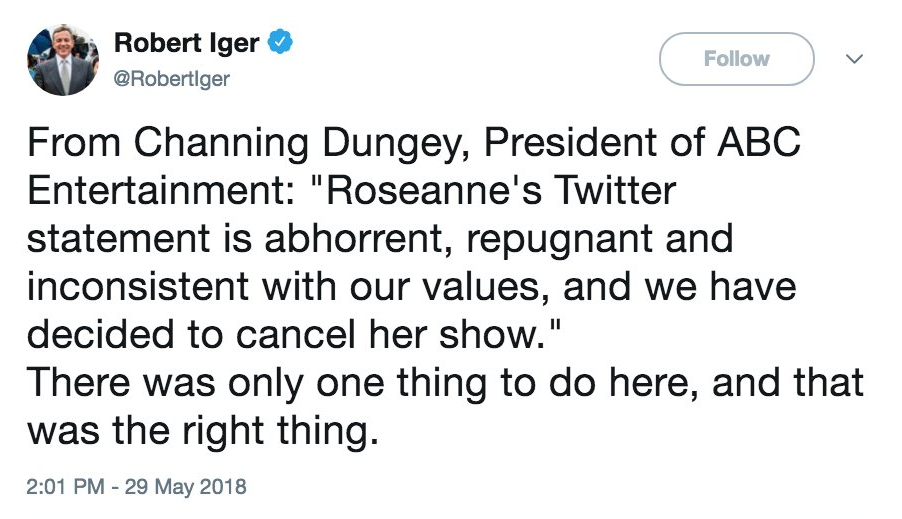 Channing Dungey, president of ABC Entertainment, issued the statement to USA TODAY, denouncing her comments hours after her apology failed to convince many on Twitter, including the show’s consulting producer Wanda Sykes.

“Roseanne’s Twitter statement is abhorrent, repugnant and inconsistent with our values, and we have decided to cancel her show,” the statement read.

Barr’s comment, which has now been deleted, was sent in response to a tweet that accused Jarrett of helping “hide” misdeeds for the Obama administration.

Jarrett, 61, is African American and worked for Obama from 2009 to 2017. Barr apologized for the tweet, describing it as “a bad joke.”

“I apologize to Valerie Jarrett and to all Americans. I am truly sorry for making a bad joke about her politics and her looks,” Barr said. “I should have known better. Forgive me — my joke was in bad taste.”

Sykes followed the apology with a short and simple message of disproval, in which she said she’d pull out as consulting producer on the reboot.

“I will not be returning to @RoseanneOnABC,” she wrote on Twitter the same day.

Sykes wasn’t the only person who disapproved of Barr’s comments, the tweets sparked reaction on the social media site from many who criticized her and ABC for allowing her self-titled show to continue.

“Roseanne’s recent comments about Valerie Jarrett, and so much more, are abhorrent and do not reflect the beliefs of our cast and crew or anyone associated with our show,” she tweeted. “I am disappointed in her actions to say the least.”

This isn’t the first time Barr has taken heat for her controversial views and pro-Trump statements. She returned to Twitter in March after taking a break from the social media site in December following an online feud with people who responded harshly to her tweets praising President Trump and criticizing his election foe, Hillary Clinton, and former president Obama.

The Roseanne reboot has also received backlash for some of its controversial jokes, including jabs at at minority-led series Black-ish and Fresh Off the Boat.

The show, which attracted a whopping 18.2 million viewers in its return to ABC in March after a 21-year absence, also stirred debate in the comedian community, including a Twitter debate between star comedians Kumail Nanjiani, Billy Eichner and Sarah Silverman the same month.