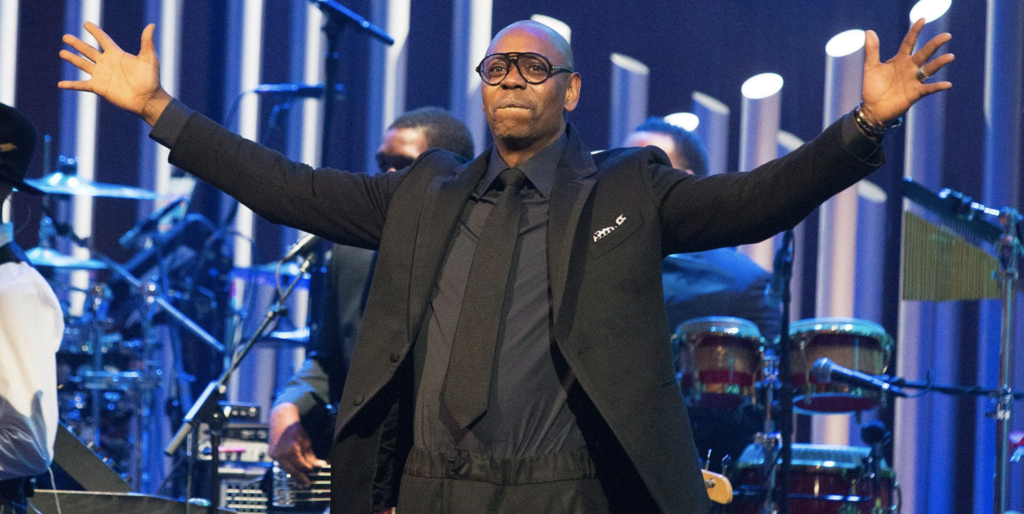 While smoking, Dave Chappelle began his acceptance speech for the Mark Twain Prize for American Humor at The Kennedy Center. Sunday night was a celebration of the comic, which presumably will keep the censors busy when it airs on Jan. 7 air on PBS (9 p.m. EST).

“I want everyone in America right now to look at me. Look at me smoking indoors,” the guest of honor bragged. “I didn’t ask anybody… What are they gonna do? Kick me out before I get the prize?”

He would later thank the Fire Marshal “for having the courage to let me be myself.”

Chappelle informed the audience “I did not write a speech.” During his impromptu remarks, he defended freedom of speech when talking about comedians he knows who are “very racist.”

“(I) don’t get mad at ’em, don’t hate on ’em,” he said. “Man, it’s not that serious. The First Amendment is first for a reason. Second Amendment is just in case the First one doesn’t work out.”

Chappelle also touched on the impact of his career: “Love this job. It saved my life.”

Here are other highlights from the (un-edited) ceremony.

“Honestly, I don’t know how this night came to be,” he said. “Dave doesn’t tend to like formal events. Normally, he dresses like a window-washer.”

Brennan then joked that the evening was an attempt for Chappelle’s wife, Elaine, to get him to stop smoking for a couple of hours. It nearly worked.

Brennan spoke of 1998’s feature “Half Baked,” which they co-wrote. Chappelle apparently phoned him, telling him out of nowhere, “Hey, if Universal reaches out to you, tell them we’re writing a weed movie together.”

“Cut to January of 1998, ‘Half Baked’ opened against ‘Good Will Hunting,’ ‘Wag the dog,’ ‘As Good As It Gets,’ and oh, yeah, ‘Titanic!'” Brennan quipped. “It was a critical and commercial flop and, quite frankly, isn’t very good.”

When pitching “Chappelle’s Show,” Brennan said they were met with resistance.

“Why do we need you when we have Chris Rock?” Brennan recalled to audible horror from the audience. “See, back then, there could only be one popular black comedian at a time. Unlike today, when there could be three.”

Comedy Central bit on the sketch series, which debuted in 2003 and ran for three seasons, until Chappelle called it quits and left the country. “And the show went really well, like absurdly well, like so well, you gotta go to Africa well. Did you think I wasn’t gonna mention it?”

“Dave Chappelle completely transformed my life,” he shared, adding he moved to Los Angeles with the $1,000 Chappelle gave him. Brennan said that the evening’s honoree “believed in me at a time when absolutely nobody did.”

When Chappelle took the stage, he told his “Chappelle’s Show” colleague: “Neal Brennan, your speech made me cry, because it reminded me of all those hard days’ work and all that money I never got for it.”

The night wasn’t all jokes. In addition to jesting that he took the $50 million of Comedy Central money that Chappelle left on the table, Stewart mentioned the benefit the honoree hosted in August following the shooting in Dayton, Ohio.

“I watched him help a city heal a wound… and replace it not just with love and with compassion,” Stewart said, “but as we sat and we watched Stevie Wonder sing ‘My Cherie Amour’ (with) the crowd going crazy and reclaiming their city, he turned to me on stage and said, ‘This is their memory now. This is their memory.’ “

Cooper also gushed over Chappelle joining him in “A Star Is Born,” for a part Cooper wrote for the comic. “You gave your soul to me… and the fact that you showed up, I couldn’t believe, I couldn’t believe you did do that favor, and I’ll never forget it.”

Silverman joked about smoking marijuana alongside Chappelle when they were in Vancouver.  And Ansari dished that in Austin, earlier this year, Chappelle suggested Ansari try a drug with him: mushrooms.

“Sorry, Dave’s family,” Ansari apologized. When Ansari said he thought about skipping the illegal activity to rest, Chappelle informed him it would be soon be announced he was getting this year’s Mark Twain Prize.