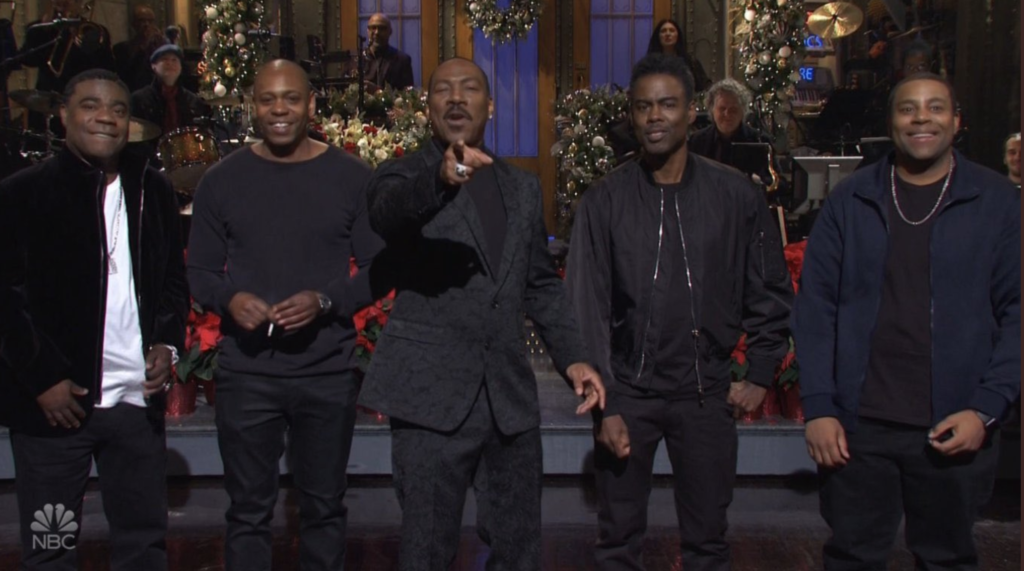 SNL Has One Helluva Night

Eddie Murphy returned to Saturday Night Live for the first time in 35 years, and he brought a few familiar faces with him. And we don’t just mean such classic Murphy characters like Mr. Robinson, Buckwheat, Velvet Jones and, of course, Gumby.

Not long after taking the Studio 8H stage — a place he hadn’t visited since February 1984, save for a quick appearance on the show’s 40th anniversary special in 2015 — the biggest star in SNL history was joined by such comedy world luminaries as Tracy Morgan, Chris Rock, Dave Chappelle and Kenan Thompson, all of whom can trace their own careers to his ‘80s success. “I wouldn’t miss this for the world,” Rock said, speaking for everyone in that studio. Of course, he also couldn’t resist tweaking his colleague and mentor. “My kids love Lizzo.”

Musical guest Lizzo did indeed justify that love by rocking the mic in her two musical performances. But the night was all about Murphy, who had the audience — both those in the room and everyone else watching at home — in the palm of his hand from his first joke: “This is the last episode of 2019; but if you’re black this is the first episode since I left back in 1984.”

In the interim, the comic became a major movie star — his latest film, Dolemite Is My Name, is currently streaming on Netflix, and easily ranks among the best of the year — and also a family man. Murphy mentioned that he recently welcomed his 10th kid into the world, and noted how his full house is a far cry from the bachelor image he had in the ‘80s.

“If you would have told me 30 years ago that I would be this boring stay-at-home house dad and Bill Cosby would be in prison, even I wouldn’t have taken that bet,” he said, before busting out his Cosby impression from back in the day. “Who is America’s dad now?”

Even Murphy’s flubs were comedy gold. Midway through the night’s second sketch — a parody of a Nailed It-style cooking competition — he accidentally dropped a swear word, and then pulled an embarrassed double take that proved he really is a dad now.

Heading into the show, it was an open question as to whether Murphy would revisit some of his vintage characters, or if he would insist on all-new material. Turns out that he came ready and willing to play the hits. While neither James Brown nor Stevie Wonder made an appearance, Murphy revived four favorites to huge applause and big laughs.