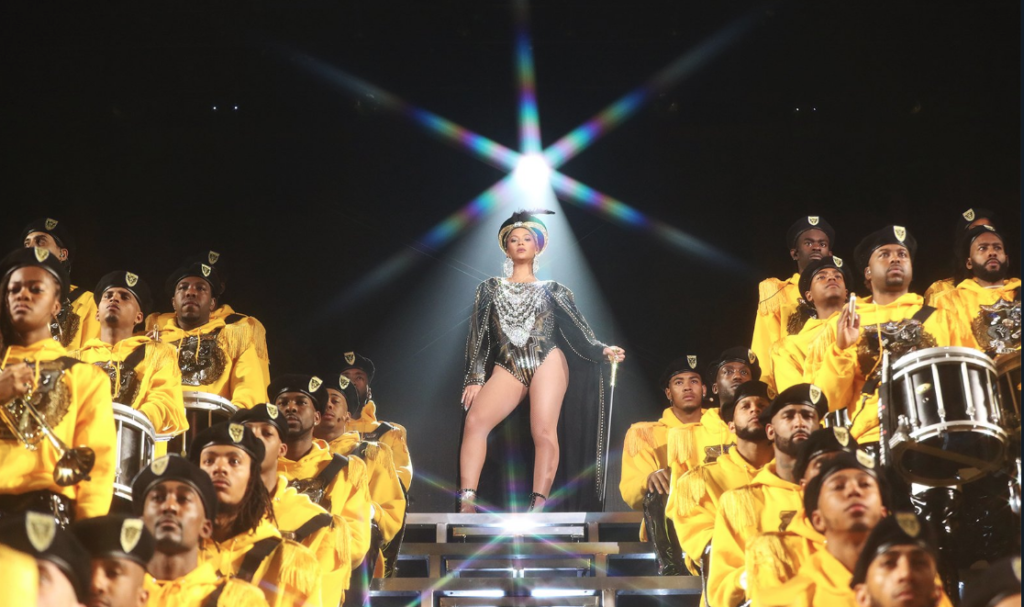 After postponing 2017’s headlining Coachella slot due to her pregnancy with twins,Beyoncé made a historic return to the main stage to close out the second night (April 14) of the festival in Indio, Calif.

Prior to what would ultimately turn out to be a new career-defining peak, rumors swirled that the pop megastar would reunite Destiny’s Child and bring out 100 dancers to back her up. And just hours before performance began, she took to Facebook to shout out her fans, and let them know to get in formation during the hour intermission before the games began.

“I am so excited to see the BeyHive tonight at Coachella,” she wrote. “We have been working hard and have a special show planned for you so please be safe and stay hydrated. We need your energy! There will be an hour intermission before my performance, so mark your spot, charge your phones, grab your drinks. Can’t wait to see y’all at 11:05pm!”

The speculation and rumors were accurate: Not only did Beyoncé reach a new creative peak, but she did it all while making it look effortless. Throughout a ceaseless two-hour set, the pop icon took the swelling Coachella crowd back to the days of feverish high school pep rallies and college homecomings. On stage, a tiered set of bleachers scraped the sky as a brass band and dozens of dancers backed what was indisputably the weekend’s most stunning performance, with guest appearances from a reunited Destiny’s Child (for a series of their classics), as well as cameos from her husband JAY-Z and sister Solange.

Most importantly, though, Beyoncé made history, not just in her own career — turning her music and performance into high art — but at the festival, which is now in its 19th year. “Coachella, thanks for allowing me to be the first black woman to headline,” she said before bringing out Kelly Rowland and Michelle Williams. “Ain’t that ’bout a bitch?”

Even by Beyoncé’s standards, the show went above and beyond. It was impeccably choreographed, designed and directed, right down to the minute details — Bey tapping her fingers across her knees in time to the beat on “Partition,” the exact dance moves done for her rendition of “Baby Boy,” the little teases of hits from the past as songs segued from one to the next.

“This is a very important performance for me,” she told the crowd between “Sorry” and “Bow Down/I Been On.” “I’m happy to be back home on the stage tonight.”

But above all, Beyoncé did it without breaking a sweat, an almost superhuman feat. Whether she was soaring over the crowd during “Drunk in Love,” or hitting micro-choreographed dance moves with the best backup dancers available while growling, “Suck on my balls” during “Sorry,” she proved that she’s truly pushing her art form forward, in both creative scope and the breadth of music she’s recorded. It was invaluable context, even, to get glimpses of her roots throughout the performance, whether Bey was singing with JAY-Z for “Déjà Vu,” dancing with Solange for the extended version of “Get Me Bodied,” or traipsing through her Destiny’s Child days with Rowland and Williams as if the chemistry had never wavered.