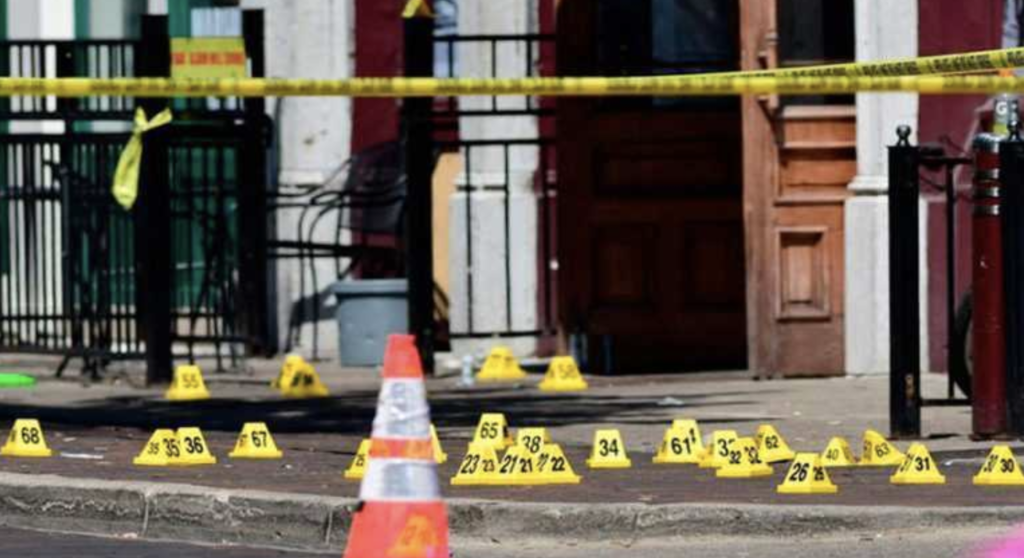 A party in Chicago held to memorialize someone who was killed earlier in the year turned into a scene of chaos and violence early Sunday when at least one person opened fire and 13 ended up shot.

The Chicago Police Department confirmed on Sunday morning that 13 people were wounded by gunfire, with the incident unfolding at three different locations. There are as yet no fatalities.

Four are in critical condition in hospital, the rest are in stable condition, CPD’s Fred Waller said in a press briefing. The ages of the victims range from 16 to 48, he said.

Two people were in custody and being questioned on Sunday morning. Police said the incident appeared to be gang-related. One of two arrested was apprehended with a weapon, Waller said, while the other was wounded. Officers recovered a revolver.

The shooting stemmed from a dispute at a the party being held to honor the life of a man killed in April, Waller said.

According to police, around 12.35am ShotSpotter technology alerted officers of shots fired in the 5700 block of South May Street in Englewood, a crime-troubled neighborhood about 10 miles from the heart of downtown Chicago.

According to local media reports, the incident occurred at a party in honor of Lonell Irvin, a 22-year-old man fatally shot during an attempted carjacking earlier this year.

“From outside, definitely there were two different shooters,” Waller said. “It looked like they were just shooting randomly at people as they exited the party.”

Local resident Terrence Daniely told WLS Chicago: “I was awoken by the sound of, seemed like 4, 5, or 6 gunshots and it seemed pretty loud, so it seemed kind of close.”

He added: “I didn’t see any commotion when I looked out the window but then shortly after I heard the sounds of people screaming and running from a party on the street.”

It is understood that more than 100 police officers attended the incident at a party.

According to The Chicago Tribune, 2,594 people have been fatally shot in the city this year. That is 248 fewer than 2018 and is the third straight year of significant decline in the numbers, with the improvement being felt across the city, including in high-crime areas.

Police have credited Chicago’s drop in crime to the use of technology used to predict where shootings might occur, while experts also credit anti-violence programs that offer jobs and gang conflict mediation.

But homicide totals are still significantly higher for Chicago than comparable metropolitan areas, such as New York or Los Angeles.

In New York, figures compiled by police officials show the city has recorded 249 murders between 1 January and 6 October , up just over 1% from 246 murders in the same period in 2018.