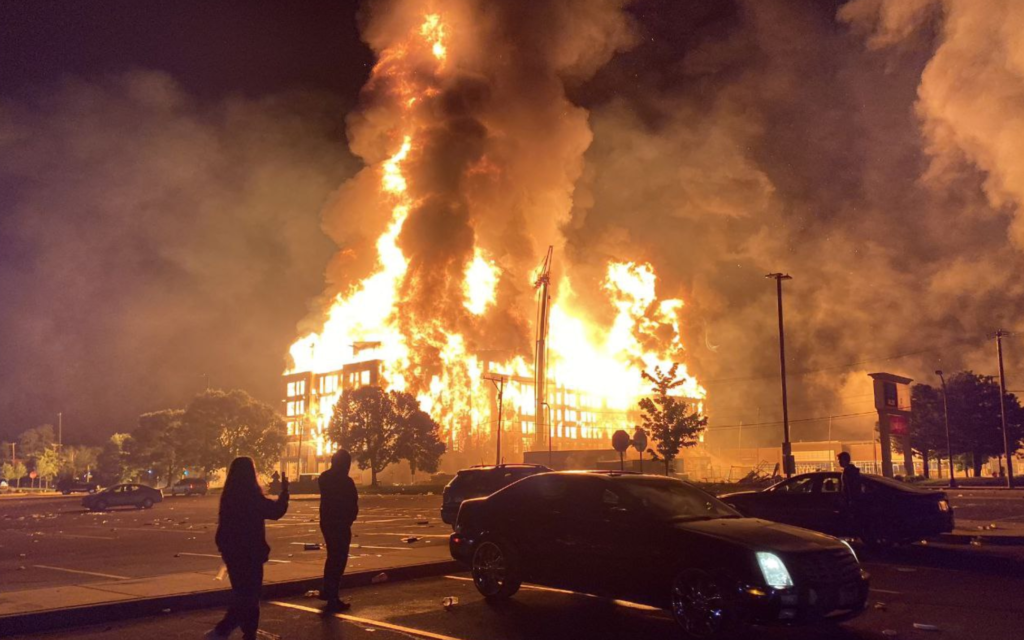 Minnesota’s governor activated the National Guard on Thursday to help police restore order following two days of violent protests in Minneapolis city over the death of a black man seen in graphic video footage gasping for breath as a white officer knelt on his neck.

Four city police officers involved in the incident, including the one shown pressing his knee into Floyd’s neck as he lay on the ground, moaning, “please, I can’t breathe,” were fired from their jobs the next day.

The Floyd case was reminiscent of the 2014 killing of Eric Garner, an unarmed black man in New York City who died after being put in a banned police chokehold as he, too, was heard to mutter, “I can’t breathe.”

His dying words became a rallying cry for the Black Lives Matter movement that formed amid a wave of killings of African-Americans by police.

Protesters thronged Minneapolis streets for a third day on Thursday chanting “I can’t breathe,” as they rallied peacefully at the Hennepin County Government Center and marched through downtown, demanding the four officers be swiftly arrested.

“There is probable cause right now” to make those arrests, civil rights activist the Rev. Al Sharpton said as he addressed the crowd. “We’re not asking for a favor. We’re asking for what is right.”

Garner’s mother, Gwen Carr, said Floyd’s case had renewed the trauma she suffered six years ago. “This is just opening up an old wound, and pouring salt into it,” she said.

Separately, hundreds of demonstrators milled around a police station and Target discount store that were the center of running clashes Wednesday night between rock-throwing protesters and riot police firing tear gas and rubber bullets.

A car in the Target parking lot was set ablaze, and looters periodically ducked inside the vacant Target store to make off with whatever was left inside.

Both gatherings began with little police presence and no immediate sign of National Guard troops.

At a morning news briefing, Police Chief Medaria Arradondo apologized to Floyd’s family, conceding his department had contributed to a “deficit of hope” in Minnesota’s largest city.

“Give us the time to do this right, and we will bring you justice,” County Attorney Mike Freeman told reporters. He acknowledged the policeman’s conduct depicted in the video was “horrible,” but said, “My job is to prove that he has violated a criminal statute.”

The federal investigation, which Attorney General William Barr had designated a “top priority,” will focus on whether the arresting officers used the “color of law” to deprive Floyd of his civil rights, a crime under U.S. law, she said.

Floyd, a Houston native known affectionately to friends as “Big Floyd” and who had worked as a nightclub security staffer, was reportedly suspected of trying to pass counterfeit money when police took him into custody.

Most protesters had been peaceful, while a smaller, core contingent engaged in unruly behavior, the police chief said.

Sympathy protests erupted on Wednesday in Los Angeles and Thursday in Denver, with hundreds of demonstrators blocking freeway traffic in both cities.