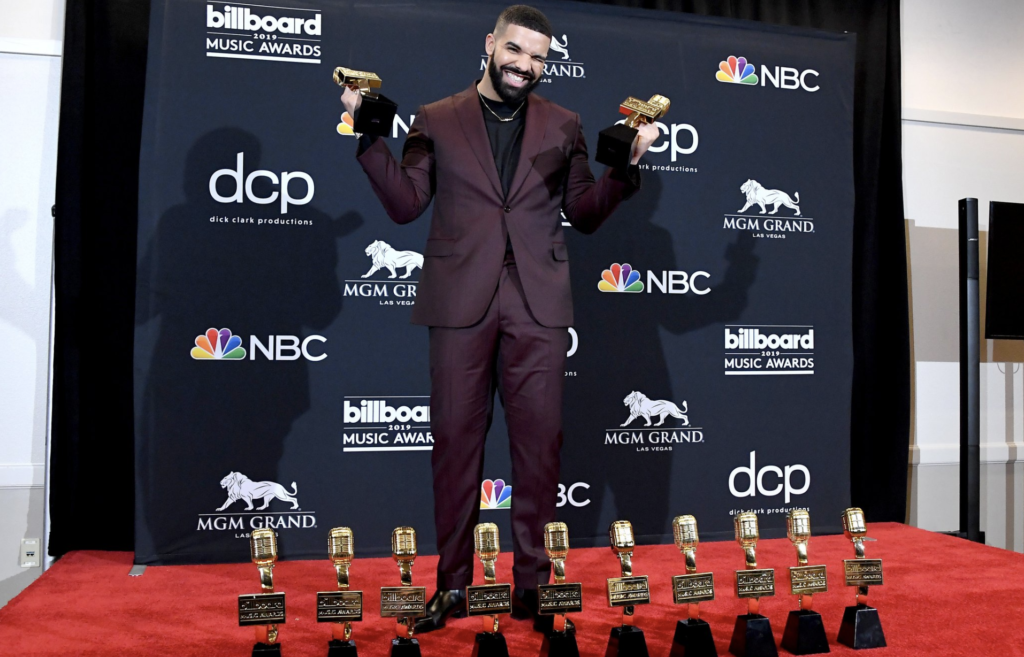 All Hail The New King Of Billboard

Drake made history at this year’s Billboard Music Awards, but numerous other artists set records as well.

Drake surpassed Taylor Swift to become the top award recipient in BBMA history. He won 12 awards, bringing his career total to 27. Swift has won 23 BBMA awards. Among Drake’s awards: top artist and top Billboard 200 album, each for the second time in three years. Drake won the latter award for Scorpion, two years after winning for Views.

BTS became the first K-Pop act to win top duo/group. BTS also took the fan-voted top social artist award for the third year in a row. The group is now halfway to matching Justin Bieber’s six-year lock on that award.

Juice WRLD took top new artist. This provided a measure of vindication for the hip-hop star, who wasn’t nominated in any categories at the 61st annual Grammy Awards in February. The other contenders for the top new artist BBMA included Dua Lipa, who won best new artist at the Grammys.

The Maroon 5/Cardi B collabo “Girls Like You” took top Hot 100 song. It’s the second time in four years that a pop/hip-hop pairing has taken top honors in that category. Wiz Khalifa’s “See You Again” (featuring Charlie Puth) won in 2016. This award was among six for the night for Cardi B; four for Maroon 5.

Florida Georgia Line became the first three-time winner for top country song. The duo won for “Meant to Be,” its record-breaking collaboration with Bebe Rexha. It won in 2014 for “Cruise” (featuring Nelly) and in 2017 for “H.O.L.Y.”

Imagine Dragons took top rock artist for the second year in a row and the third time overall. They previously won in 2014. This makes them the top winners in the category since the BBMAs relaunched in 2011 following a brief hiatus. But Panic! at the Disco took both top rock album and top rock song.

Ella Mai took three awards, including top R&B artist. She’s the third woman to win in that category since the BBMAs relaunched in 2011. The first two were Rihannaand Beyoncé.

Lauren Daigle became the first female solo artist to win twice as top Christian artist. She previously won the award in 2017. Lauren also took top Christian album and top Christian song. She is the only artist to sweep all three of these awards in a given genre this year.