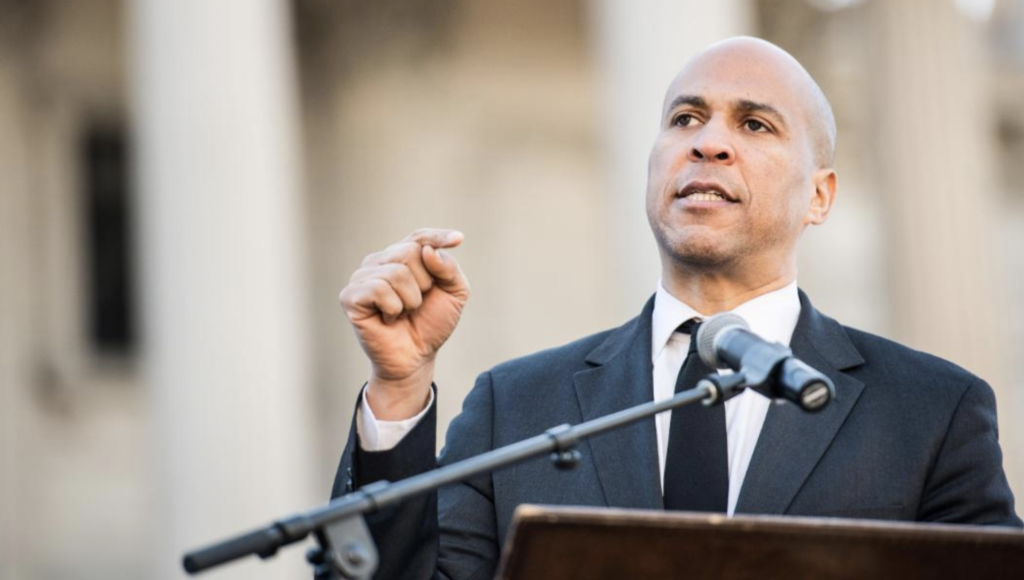 Cory Is Going For It All

U.S. Senator Cory Booker, who gained national prominence in the fight over Supreme Court Justice Brett Kavanaugh, announced on Friday that he would seek the Democratic Party’s nomination for the 2020 presidential election, injecting more youthful energy into the expanding Democratic field.

Booker, 49, became the latest Democrat and the fourth U.S. senator to announce a presidential bid in what is expected to be a crowded and diverse race to be the candidate to try to unseat President Donald Trump.

His announcement came as little surprise. The second-term senator from New Jersey has appeared at political events in Iowa and New Hampshire as speculation mounted that he would parlay the Kavanaugh fracas into a presidential run.

“I believe that we can build a country where no one is forgotten, no one is left behind,” he said in a video on his website. He added that he would focus on creating good jobs and reforming the criminal justice system.

He announced his bid on the first day of Black History Month, mentioning on his website the impact of racial discrimination on his family and a video posted on it emphasized racial justice issues.

Booker is the second black American to decide to run, after U.S. Senator Kamala Harris of California.

The senator used much of his initial message to advocate for unity and bipartisanship. In an interview on ABC’s “The View” on Friday, Booker said he was not running “to tear people down” and largely avoided criticizing Trump.

“That’s what we have to do in this country,” he said, “bring people together.”

A former mayor of Newark, New Jersey, Booker has styled himself a progressive who favors a Medicare-for-all healthcare plan and has a liberal voting record in the Senate.

But he remains mistrusted by some on the left for his acceptance of contributions from corporate political action committees and his defense of private equity firms. Last year, he pledged to no longer accept corporate donations.

In running as a relative newcomer to Washington, Booker follows in the footsteps of another black American politician, Barack Obama, who left his Senate seat and ultimately won the presidency in 2008.

Democratic nominating contests begin in February 2020 in the traditional starting point of Iowa. The candidate who amasses the majority of delegates will be nominated at the party’s convention in the summer and will likely face Trump, a Republican, in the general election.

Hillary Clinton’s battle with Bernie Sanders in the 2016 competition for the Democratic nomination – and her eventual loss to Trump in the election – triggered an ongoing debate within the party about the best path forward, pitting moderates against progressives and younger politicians against the old guard.

Some in the party believe an establishment figure who can appeal to centrist voters is the way to win back the White House. Others think a fresh face – and particularly a diverse one – is needed to energize the party’s increasingly left-leaning base.

As a member of the Senate Judiciary Committee, he was an outspoken critic of Kavanaugh’s nomination to the high court. At one point, Booker released a confidential memo that the Republicans who control the committee had kept private.

He also took the unusual step of testifying against a fellow senator, Republican Jeff Sessions, when Trump nominated Sessions to be attorney general. However, when Trump later fired Sessions over his recusal in the Russia investigation, Booker said it was an “alarming development.”

Booker was a strong proponent of the criminal justice reform bill passed by Congress in December and backed by the White House.

At times, he has caught Trump’s attention.

“If Cory Booker is the future of the Democratic Party,” Trump tweeted in 2016, “they have no future.”

Trump also has criticized Booker’s tenure as mayor of Newark.

In turn, Booker has said he “loves” Trump as part of his Christian faith and that his party should not make opposition to the president the centerpiece of its message.

“If we become a party that is about what we’re against, I don’t think that’s a winning strategy,” Booker told The Atlantic magazine in a December interview. “I think if we give all of our energy — psychic, mental — toward Donald Trump, it makes him powerful.”