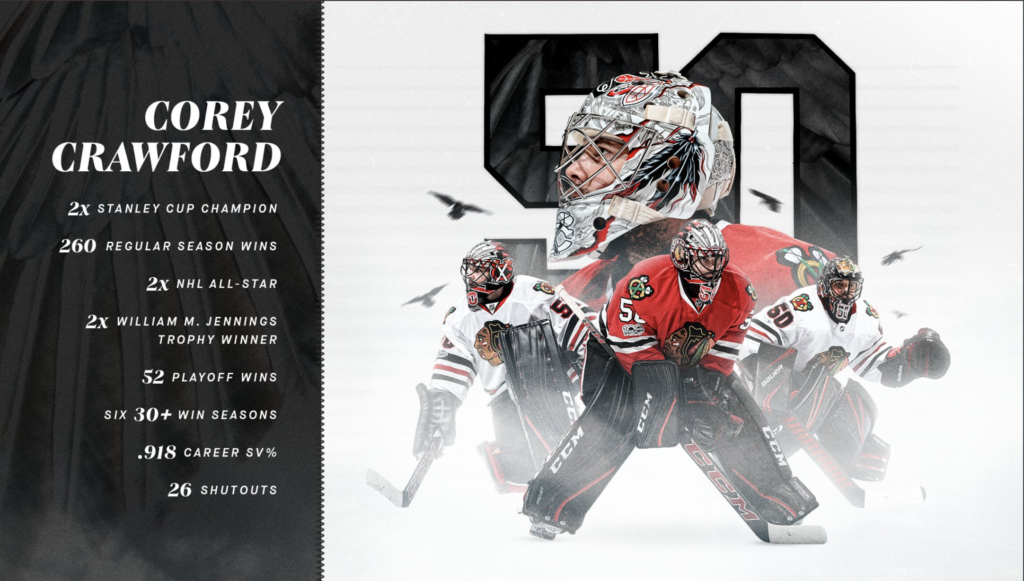 “I had a conversation with Corey earlier today,” Bowman said. “And it was an emotional talk.”

The 35-year-old Crawford is an unrestricted free agent. Crawford, who has spent his entire career in Chicago since being drafted in the second round in 2003, has been the Blackhawks’ starting goaltender since 2010-11 and helped the franchise to two Stanley Cups, in 2013 and 2015.

Sources told ESPN that the Blackhawks had been negotiating with Crawford on a new deal but were asking him to take a significant pay cut from $5 million on his last contract. Sources say the Blackhawks were offering about $3.5 million to Crawford for a one-year deal, although talks fell apart.

“The message to Corey and to everyone else today is that we’ve decided we have some young goaltenders here in Chicago we believe in,” Bowman said. “Much like Corey needed that opportunity when he came up after the 2010 season, we have a couple young goalies in [Kevin] Lankinen and [Collin] Delia who we haven’t given a real opportunity to. With where we’re headed, the NHL is relying more and more on young players. We’re going to embrace that going forward.”

The Blackhawks have 26-year-old Delia and Lankinen, 25, signed through the next two seasons. Chicago did not extend a qualifying offer to Malcolm Subban, 26, who was acquired from Vegas as part of the Lehner deal, though Bowman said the Blackhawks would be interested in bringing him back as well.

Crawford ends his Blackhawks tenure ranked third in franchise history with 260 career wins, trailing only Tony Esposito and Glen Hall. Crawford is the Blackhawks’ franchise leader in postseason wins (52) and is the only goaltender in team history with multiple Stanley Cups.

Moving on from Crawford means the Blackhawks are going all-in on a youth movement. While Stanley Cup stalwarts Patrick Kane, Jonathan Toews, Duncan Keith and Brent Seabrook are still on the roster, the Blackhawks are trying to build around their next generation — which includes Kirby Dach (19), Alex DeBrincat (22), Dylan Strome (23), Adam Boqvist (20) and Ian Mitchell (19).