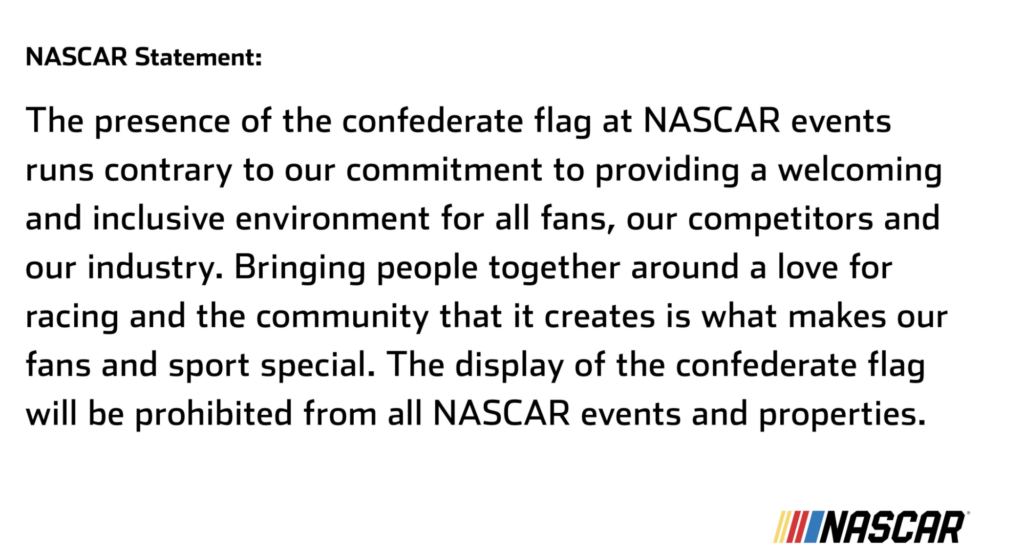 Two days after Bubba Wallace called for NASCAR to ban all Confederate flags at racetracks, the organization did just that.

“The presence of the Confederate flag at NASCAR events runs contrary to our commitment to providing a welcoming and inclusive environment for all fans, our competitors and our industry. Bringing people together around a love for racing and the community that it creates is what makes our fans and sport special. The display of the Confederate flag will be prohibited from all NASCAR events and properties.”

The move comes amid social unrest around the globe following the death in police custody of George Floyd, an unarmed black man in Minneapolis. Protests have roiled the United States since Floyd’s death, and Confederate monuments are being taken down across the South — the traditional fan base for NASCAR.

Wallace, the circuit’s only black full-time driver, had told CNN on Monday: “My next step would be to get rid of all Confederate flags. No one should feel uncomfortable when they come to a NASCAR race. So it starts with Confederate flags. Get them out of here. They have no place for them.”

He commended the move before Wednesday night’s race at Martinsville Speedway in Virginia.

“Props to NASCAR and everybody involved,” he told Fox Sports 1, which broadcast the race.

“[NASCAR president Steve] Phelps and I have been in contact a lot, just trying to figure out what steps are next, and that was a huge pivotal moment. A lot of backlash for the sport, but it creates doors and allows the community to come together as one. And that’s what the real mission is here. So I’m excited about that, and just gonna keep going on tonight.”

Richard Petty Motorsports announced Tuesday that Wallace would drive a car with a Black Lives Matter paint scheme in the race to promote racial equality.

Confederate flags have been a familiar sight at NASCAR races over its 72-year history, dotting the infield atop RVs or being waved by fans in the grandstands, though the stock car series with its roots in moonshine running has in recent years taken cautious steps to sever the connection.

The flag issue has been a thorny one for NASCAR. Former chairman Brian France in 2015 tried to ban the flying of Confederate flags at racetracks, angering many fans.

NASCAR did not address how it would enforce the policy or indicate any penalties for fans who violate it by bringing the Confederate flag to a track. NASCAR has not raced in front of fans since the sport resumed last month amid the coronavirus pandemic and was expected to have minimal fans allowed at races scheduled this month in Florida and Georgia.