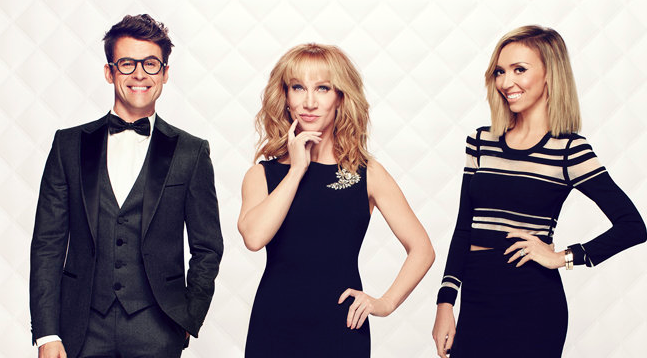 Fashion Police is now down two panelists. Just weeks after the exit of longtime cast member Kelly Osbourne, Kathy Griffin has announced her own departure — breaking the news in a long Twitter missive late Thursday afternoon.

“After seven episodes of Fashion Police, I discovered that my style does not fit with the creative direction of the show and now it’s time to move on,” she wrote, before wishing producers and the network well.

Fashion Police has only been back on the air since January, when it returned from a long hiatus following the death of Joan Rivers. Griffin was not the only new addition. Brad Goreski also joined the panel.

Ratings have been mediocre since the comeback episode didn’t manage to crack 1 million viewers, and it wasn’t until some controversial remarks made during the Oscars episode that the show got much attention. Giuliana Rancic’s maligned assessment of Zendaya Coleman’s Academy Awards red-carpet look, which included her new dreadlocks, prompted a criticism from many — including Coleman and Osbourne. Despite Rancic’s public apologies, Osbourne made good on her threat to quit.

Griffin’s announcement certainly echoes Osbourne’s issues with mean-spirited remarks — if not directly. “My brand of humor, while unrepentant and unafraid, is all about context,” Griffin writes. “There is plenty to make fun of in pop culture without bringing people’s bodies into it.” 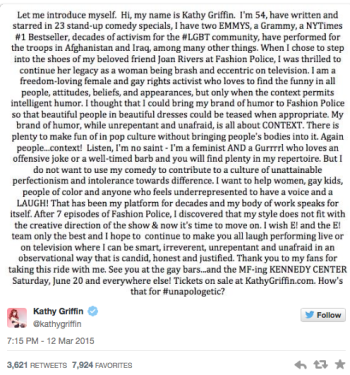 Two high-profile exits in such quick succession certainly puts the show’s future in question. E! brass did not immediately decide to keep the show after Rivers’ death. And with the body count now cut in half, new permanent panelists will not be found overnight.

An E! rep confirmed the news and offered the following statement: “We wish her all the best and are grateful for her time on the show, as well as the many laughs that she gave us all. Fashion Police will return, as scheduled, on Monday, March 30 at 9 p.m. with our talented co-hosts Giuliana Rancic and Brad Goreski and executive producer Melissa Rivers.”