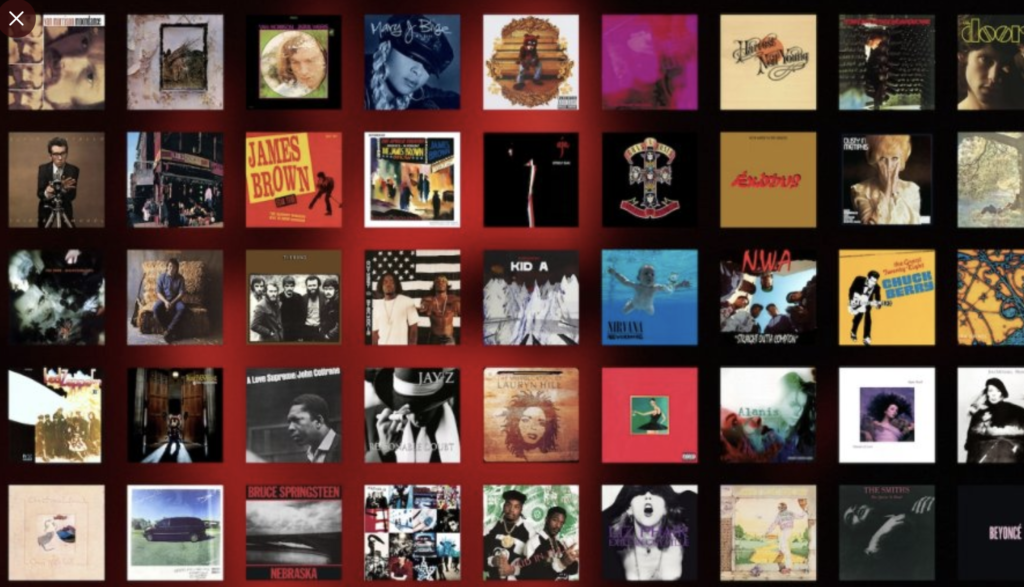 The 500 Greatest Albums of All Time.

Rolling Stone’s 500 Greatest Albums of All Time list has been revamped.

The pop culture magazine’s original list was published in 2003 and despite the fact that almost two decades have passed, the list remains wildly popular and polarizing, with nearly 63 million readers last year alone, according to Rolling Stone.

But times have changed, the music industry has evolved and some of today’s emerging musicians were just children in 2003. (Grammy winner Billie Eilish was only 2.) So it was time for a complete overhaul.

“The goal wasn’t to update the list but blow it up and re-create it from scratch, reflecting both the canon of pop music and the ever-shifting currents of taste,” Rolling Stone editor Jason Fine wrote Tuesday.

The new list of 500 Greatest Albums includes 154 new entries and 86 albums from the 21st century. It also reflects more inclusion and diverse genres, with “three times as many rap albums represented on the new list as on the original.”

Released on Aug. 25, 1998, “Miseducation” is Hill’s first and only solo studio album and was a defining release of its era in multiple ways. It was the album that made Hill a star, breaking the record for first-week sales by a female artist with 400,000-plus copies, and earning Hill 10 Grammy nominations and five wins, the most for a female artist at that time.

Dylan’s true masterpiece of an album, “Blood on the Tracks,” was released on Jan. 20, 1975. It was recorded at a pivotal time in Dylan’s personal life (romantic entanglements and divorce) and career (a “comeback” record of sorts).

8. Prince and the Revolution, ‘Purple Rain’

Released on Sept. 24, 1991, “Nevermind” was more than just another rock album. It gave a voice to a generation looking to be heard, hammering the final nail into hair metal’s coffin while placing alternative rock at the forefront of popular music.

The most influential band of the 1960s – and all of rock ‘n’ roll, many say – released their swan song in 1969. Made over the course of sporadic studio sessions in spring and summer 1969 that gathered the group together amid their slow dissolve, “Abbey Road” was released just days after the meeting of the band members where John Lennon informed them of his plans to split.

4. Stevie Wonder, ‘Songs in the Key of Life’

Released on Sept. 28, 1976, “Songs” is one of the most influential albums released in an especially fruitful time for Wonder in particular and R&B in general. It includes the enduring hits “Sir Duke,” “I Wish” and “Isn’t She Lovely?” and additional classics such as “Knocks Me Off My Feet,” “Black Man” and “Pastime Paradise.”

“What’s Going On,” a poignant musical masterpiece crafted in a season of unease, persists as a timely backdrop to another heated summer, half a century later, when the world feels upside down.

Racial tensions, police controversy, environmental anxieties, a globe on edge – they were the topics on the front burner when Gaye rebooted his musical career and took control of his creative vision inside Motown.

The song with the silky, layered vocals and an emphatic protest message was topical when Gaye cut it in 1970. It was still relevant when a newly freed Nelson Mandela recited its lyrics for a packed Tiger Stadium in 1990. And it resonates in 2020, in the wake of George Floyd’s killing by police — the 8 minutes and 46 seconds stark enough to slice their way into a pandemic lockdown.