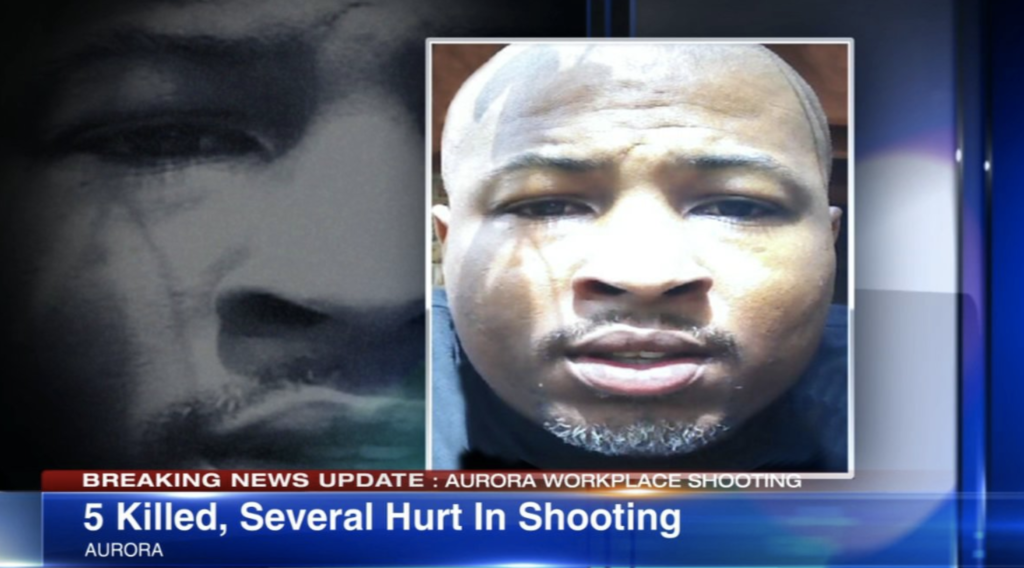 Another Coward With A Gun Kills 5 People

A gunman opened fire at an Illinois factory just after receiving notice of termination from his job there on Friday, killing five fellow workers and wounding five policemen before he was slain by police, authorities said.

The assailant, identified as Gary Martin, 45, had worked at the Henry Pratt Company for 15 years before Friday’s violence unfolded at the firm’s sprawling facility in Aurora, 40 miles west of Chicago, Aurora Police Chief Kristen Ziman said.

At a late-night news conference, Ziman said it was not yet clear whether the suspect, armed with a Smith & Wesson handgun, was carrying the weapon at the time of his dismissal or whether he “went to retrieve it” before opening fire.

An eyewitness and fellow employee told CNN he saw the gunman running through the building carrying a pistol fitted with a laser sight.

Also uncertain was the degree to which the shooting was premeditated, Ziman told reporters.

“The information that we have indicates he was being terminated today,” she said, adding that the reason for his dismissal was not known to police.

The chief said investigators were still looking into whether the gunman had a prior criminal history, but public records show Martin was convicted in 1995 for aggravated assault in Mississippi. Convicted felons are generally barred from possessing firearms.

The bloodshed marked the latest spasm of gun violence in a nation where mass shootings have become almost commonplace. It came one day after the one-year anniversary of the massacre of 17 people by a gunman at Marjory Stoneman Douglas High School in Parkland, Florida.

The five policemen who were struck by gunfire and a sixth employee who was also wounded were being treated at local hospitals and were expected to survive, Ziman told reporters.

Detectives were still working to establish what relationship any of the victims – all men – had to the killer and whether any were his supervisors.

She said the five wounded officers were shot in the first five minutes of their arrival at the factory-warehouse plant, which employs about 200 workers and occupies 29,000 square feet in a working-class district of Aurora, the second-largest city in Illinois. One officer was hit just outside the building.

After the initial volleys of gunfire in the early minutes of the rampage, no further shots were fired until additional police who swarmed the factory confronted the suspect about 90 minutes later holed up inside the building. He shot at them, and they returned fire, killing the gunman, Ziman said.

Ziman said police had searched the gunman’s residence as part of their investigation of what she called a “classic workplace shooting,” and preliminary evidence indicated he had acted alone.

Martin’s LinkedIn page listed him as a valve assembler at the Henry Pratt plant, a subsidiary of Atlanta-based Mueller Water Products.

“Mueller Water Products is shocked and deeply saddened by the horrific tragedy that occurred today at our Henry Pratt facility,” Mueller said in a message on Twitter.

“Our hearts are with the victims and their loved ones, the first responders, the Aurora community and the entire Mueller family during this extremely difficult time,” the company said.