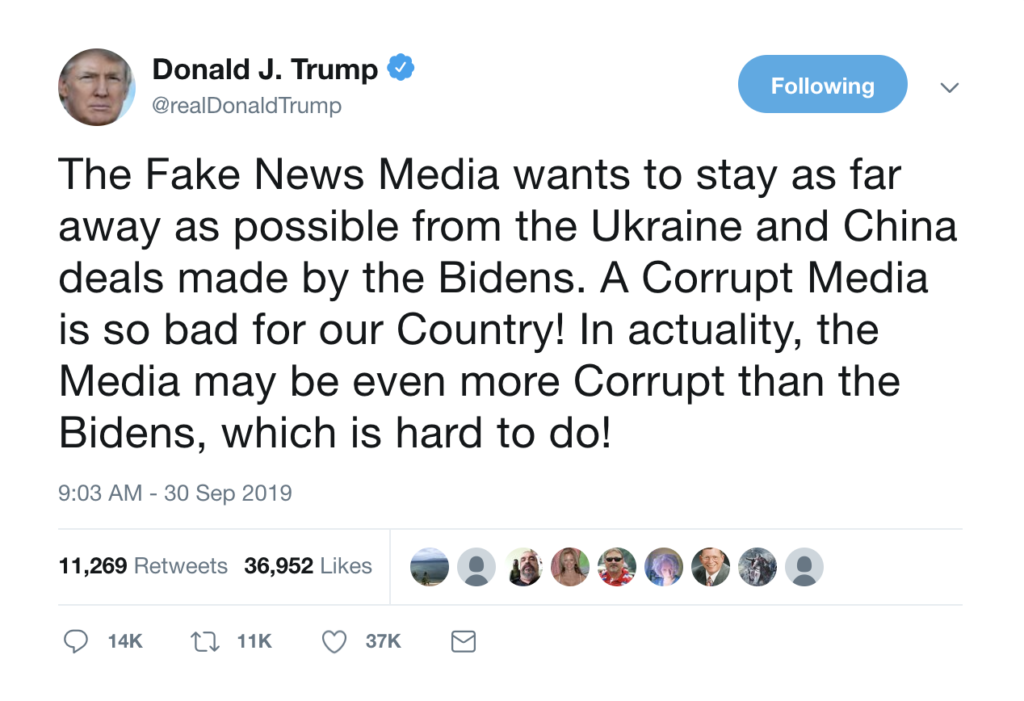 Is America Great Again Yet?

President Donald Trump on Monday intensified his attacks on a lawmaker leading the House of Representatives’ impeachment inquiry, suggesting that congressman Adam Schiff should be arrested for “treason.”

Witnesses are due to testify in the House this week in hearings related to Trump’s request that a foreign power investigate Joe Biden, one of the leading Democratic candidates seeking to challenge him in 2020.

A U.S. intelligence official filed a whistleblower complaint citing a July 25 telephone call in which Trump asked Ukrainian President Volodymyr Zelenskiy to investigate Biden and his son Hunter, who sat on the board of a Ukrainian gas company.

The whistleblower has not been publicly identified.

In a series of Twitter posts on Monday morning, Trump appeared to reference comments made by House Intelligence Committee Chairman Schiff during a committee hearing last week.

In those comments, Schiff says the call to Zelenskiy “reads like a classic organized crime shakedown” and parodies the president’s remarks.

“Rep. Adam Schiff illegally made up a FAKE & terrible statement, pretended it to be mine as the most important part of my call to the Ukrainian President, and read it aloud to Congress and the American people. It bore NO relationship to what I said on the call. Arrest for Treason?” Trump wrote in a post on Twitter.

A spokesman for Schiff did not immediately respond to a request for comment.

Monday’s post followed a string of tweets from Trump on Sunday evening in which he said he wanted to meet the whistleblower, who he called “my accuser,” as well as “the person who illegally gave this information” to him or her.

Democrats accuse Trump of pressuring a vulnerable U.S. ally to get dirt on a rival for personal political gain. The phone call with Zelenskiy came after Trump froze nearly $400 million in aid intended to help Ukraine deal with an insurgency by Russian-backed separatists in the eastern part of the country. The aid was later provided.

The Intelligence Committee is leading the inquiry in the Democratic-led House which could lead to approval of articles of impeachment against the Republican president and a subsequent trial in the Republican-led Senate on whether to remove Trump from office.

Schiff said on Sunday he expects the whistleblower to appear before the panel very soon.

House investigators are set to take the first witness testimony from two people mentioned in the whistleblower’s complaint.

On Wednesday, three House committees – Intelligence, Foreign Affairs and Oversight – are due to get a deposition from former U.S. ambassador to Ukraine Marie Yovanovitch, who Trump labeled “bad news” during his call with Zelenskiy.

On Thursday, the committees are set to get a deposition from Kurt Volker, who resigned last week as Trump’s special representative for Ukraine after the whistleblower complaint named him as one of two U.S. diplomats who followed up with Ukrainian officials a day after Trump’s call to Zelenskiy.

Some House Democrats said articles of impeachment against Trump could move to the House floor as soon as next month.

Schiff said any effort by Trump to stonewall the probe could be used to impeach him for obstructing Congress.

Trump has withstood repeated scandals since taking office in 2017. House Democrats considered, but never moved ahead with, pursuing articles of impeachment over Trump’s actions relating to Russian interference in the 2016 U.S. election aimed at boosting his candidacy.

The United States has been giving military aid to Ukraine since Russia’s annexation of Crimea in 2014.