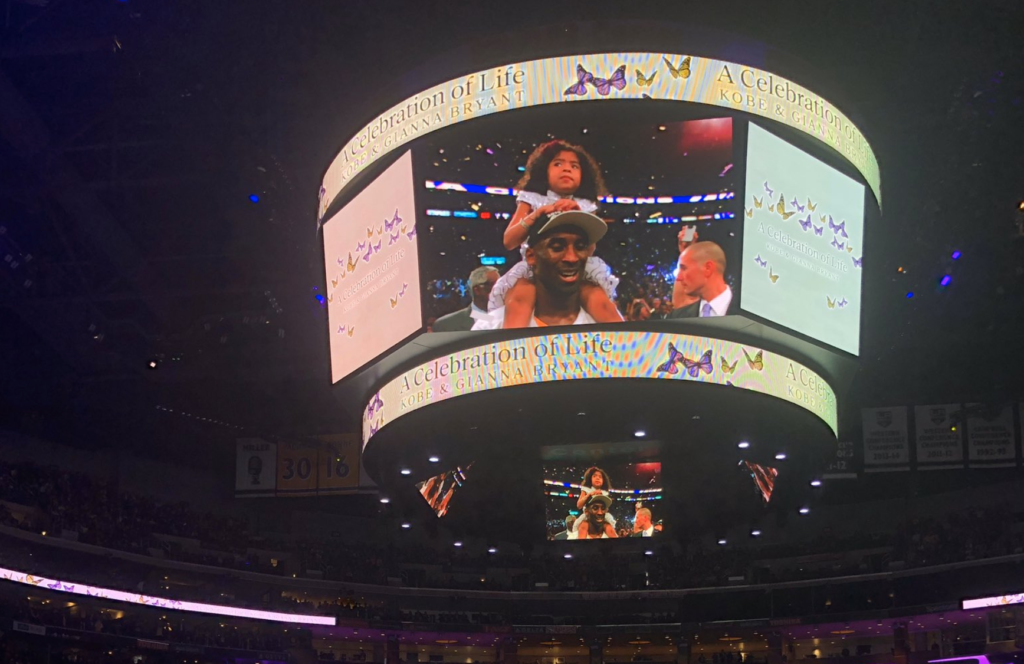 Friends, family, former teammates, and legions of fans packed the Staples Center this morning for a series of heart-wrenching tributes to Kobe and Gianna Bryant, who died on January 26 in a helicopter crash in Calabasas.

The ceremony started with a performance by Beyonce, who was introduced as a “very close friend of the Bryant Family.” “I’m here because I love Kobe and this was one of his favorite songs,” Beyonce explained during “XO,” the first in a two-song set along with “Halo.”

Another friend of the family, Jimmy Kimmel, served as master of ceremonies. The talk show host fought back tears as he talked about the victims’ families.

“I can only imagine how painful this is for them,” Kimmel said. “I don’t think any of us could have imagined this. Everywhere you go, you see his face. His number, Gigi’s face, Gigi’s number—everywhere, at every intersection. There are hundreds of murals painted by artists who are inspired…because kobe was an artist too. Not just in L.A…. in places where he’d be booed on the court, Kobe is missed.”

WNBA player Diana Taurasi recalled Kobe’s influence on her as a young Angeleno watching him play in the late ’90s. Later, the two became friends, and Kobe christened her the “White Mamba,” a nickname based on his own self-given nickname. University of Connecticut women’s basketball coach Geno Auriemma talked about Kobe’s enduring influence on the world, not just as a basketball player but as a father. Gianna, a budding basketball talent, dreamed of attending UConn and Kobe took her to a game to see Auriemma’s team, sitting and watching like any other dad visiting a college with his daughter.

Lakers GM Rob Pelinka celebrated Kobe the best friend, Kobe the dad, and Kobe the husband, and told a story about the time Kobe learned Beethoven’s “Moonlight Sonata” by ear so he could surprise wife Vanessa. Alicia Keys took the stage to perform it in their honor.

Later in the proceedings, drenched in tears, Michael Jordan said, “When Kobe Bryant died, a piece of me died,” he said. “I will live with the memories of knowing that I had a little brother that I tried to help in every way I could.” He cracked a joke about the inevitable “Crying Jordan” memes, saying, “That is what Kobe Bryant does to me. He knows how to get to you in a way that affects you personally…even if he’s being a pain in the ass.”

In a stunning display of fortitude, Vanessa Bryant took the stage to honor her husband and daughter. She praised Gigi’s intelligence, talent, and warmth—”she’d hug me so tight I could feel her love”—and Kobe’s determination and sensitivity; he loved spending time with his daughter at the koi pond at Fashion Island and loved movies like Steel Magnolias and Little Women.

Saying goodbye to her “soul mate,” Vanessa said, “Babe, you take care of our Gigi—I got Nani, BB, and Coco. We’re still the best team.”