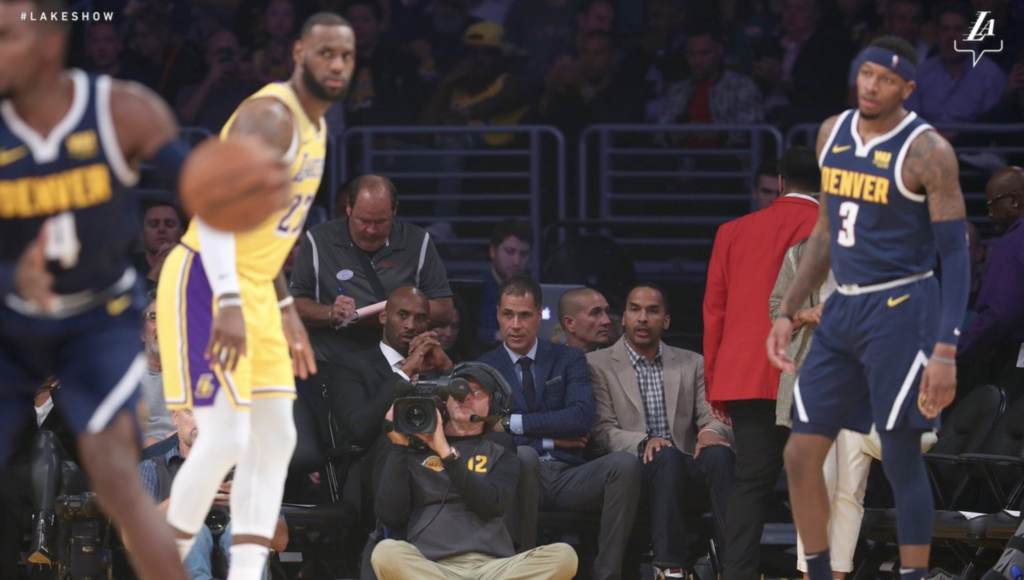 As LeBron James walked to the free throw line with 12.9 seconds left in Thursday’s game, an approving Kobe Bryant clapped and pumped both of his fists, encouraging his old team and its new superstar to close out their best win of the early season.

Seated at the corner of the baseline, Bryant made a rare appearance at Staples Center, and the former Los Angeles Lakers great watched his old rival James collect two milestones: his first triple-double with the Lakers and first home victory with them.

Behind James’ 28 points, 11 assists, 11 rebounds and 3 steals, the Lakers handed the Denver Nuggets their first loss of the season with a 121-114 victory before a jubilant Staples Center crowd.

“I absolutely [noticed him], of course. You notice him sitting right there on the baseline over there,” said James, who did not get a chance to talk to Bryant. “[One] of the all-time Laker greats. What he’s done for this franchise in his 20-plus years that he was here … it speaks wonders.

James now has 74 career triple-doubles, four shy of Wilt Chamberlain for fifth all time, according to ESPN Stats & Information. James is the first Lakers player to record a 20-point triple-double since Bryant did so in December 2014 against Denver.

The Lakers felt the added energy that came with Bryant in attendance, something he did last season when he and his family were honored with the retirement of his No. 8 and No. 24 jerseys. Bryant, who sat next to Rob Pelinka, the Lakers’ general manager and his former agent, also felt the buzz in Staples Center with the Lakers having a new superstar in James. It’s the type of excitement that hasn’t really been here since Bryant played and the Lakers were winning.

“It’s great to have this excitement back in the building,” Bryant said after the win.

Bryant watched the Lakers erase an eight-point fourth-quarter deficit with a 15-2 blitz in just over three minutes. Without suspended starters Rajon Rondo and Brandon Ingram, the Lakers (2-3) won their second straight game with all five starters scoring in double figures. Rondo will return when the Lakers play at San Antonio on Saturday, while Ingram has one more game to sit out for last Saturday’s melee with the Houston Rockets.

Lance Stephenson came off the bench again and sparked the Lakers’ fourth-quarter run by scoring eight of his 12 points, including burying back-to-back 3-pointers during the spurt. He also fired a bullet pass from beyond half court by two Nuggets to a streaking James for a dunk that gave the Lakers the lead for good with 3:30 left.

As the Nuggets called for timeout, an amped James ran back down court to find Stephenson and celebrate the pass.

“I was really impressed with Lance,” Bryant said.

Stephenson and other Lakers said they couldn’t help but notice Bryant sitting there in the corner. When Bryant was shown on the big screen before the second quarter, Staples erupted.

“Oh man, Kobe, it’s a blessing for him to be at the game,” Stephenson said. “That is one of my favorite players. He was like, ‘Good game,’ after the game so I was a little hyped.”

Bryant said he loved what he saw from Kyle Kuzma (22 points), who got to train with Bryant this offseason. Bryant also watched Lonzo Ball deliver his best all-around game of the season. Making his third start in place of the suspended Rondo, Ball had 12 points, 8 assists, 6 rebounds and 5 steals.

Ball disrupted Denver’s offense with his active hands, constantly deflecting or knocking the ball away from the Nuggets inside while also applying full-court pressure at times as well. He provided stellar help defense on Denver’s Nikola Jokic (24 points, 11 rebounds, 6 turnovers) while also guarding Jamal Murray (22 points, 10 rebounds) at times.

“He’s a very gifted basketball player,” James said of Ball. “Very cerebral basketball player. I think when he’s playing aggressive basketball and thinking shot-first, everything else opens up for him. He has some of the quickest hands that this league has.

“A lot of people always try to discredit what he can do offensively, but they never give him enough credit what he does defensively. Every time he’s in the lineup, he’s getting two, three, four steals, deflections.”

Once longtime rivals, James was thankful to see Bryant come out and watch him and the Lakers.

“He’s doing a lot of things right now after basketball,” James said. “His daughter looks like she is on her way to play the game of basketball. She looks nice playing, too. So for him to take the time out to come watch us play tonight was pretty cool.”